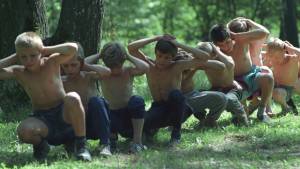 While Russia’s Minister of Culture waxes lyrical about this ‘patriotic camp’ entitled “I am a Citizen and Defender of a Great Country”, his first deputy is busy explaining why the Council of Europe, British Council and other bodies, funded from abroad, are plugging all the wrong values.

Russia’s Minister of Culture Vladimir Medinsky has announced that in 2016 the Russian Military History Society which he heads is to organize a ‘patriotic camp’ for 5 thousand children in Crimea, entitled “I am a Citizen and Defender of a Great Country”.  An abandoned camp-site is to be used.

Children will have to earn the right to go it, he says, by studying well, or success in history studies.  At the camp the young people, aged from 12 to 18, will study the history of Russian statehood and the Russian Armed Forces; military ethics, and will also undergo physical and tactical training, together with training in using firearms and marching in formation, etc.  Medinsky believes that this has a positive impact on kids who want to be “like the military heroes of our Fatherland”.

The camps were first started in Russia in 2014 with the aim to prevent the kinds of protest that led in Ukraine to Euromaidan, as Denis Sadovnikov from the Russian Military History Society made quite clear.

As an alternative to a Russian Maidan, Sadovnikov claimed, children could find a "positive" role model in Igor Strelkov, the then ‘defence minister’ of the self-proclaimed ‘Donetsk people’s republic’ and identified by US officials as working for Russia’s GRU military intelligence service.

This summer 8 such camps are planned with 100-300 people there at any one time.

Another of the initiatives from the same Russian Military History Society, reported here, was the creation of a museum dedicated to bloody dictator Joseph Stalin in the village of Khoroshevo (Tver oblast) where Stalin stayed overnight in August 1943.

The Society was created by presidential decree on Dec 29, 2012 “for the purpose of consolidating the forces of state and society in the study of Russia’s military-historical past; countering efforts to distort it; popularizing the achievements of military-historical studies; developing patriotism and raising the prestige of military service”.  Its founders are the Russian Ministries of Culture and of Defence.

Russia’s Culture Ministry in general seems to echo certain political trends emanating from the Kremlin.  In Yalta on May 29, just four days after Russian President Vladimir Putin signed into force a new law on ‘undesirable organizations’, First Deputy Minister of Culture Vladimir Aristarkhov claimed that “various organizations with funding from abroad, under the guise of cultural events, are engaged in the “dismantling of our traditional values” and popularization of traditions alien to Russian society.

“In Russia there are still numerous companies and funds financed from abroad which purportedly support culture. It’s very important to understand what exactly it is that they pull out under the guise of culture.”  As examples of such pernicious organizations, he names the Open Society Institute (the Soros Fund); the British Council; and the Council of Europe.  “These are bodies as we see which either work for the breakdown of our traditional values, or to develop what are not our values”.

Five thousand Crimean young people, we can assume, will learn only about defending the Fatherland from those who would encroach upon these supposed ‘traditional values’.