No charges and racial motive denied in bloody attack on students in KharkivKharkiv police officers caught hitting a black studentRacist attack on young man in KyivPolice officer accused of involvement in racist attack on football fansUkraine’s police must not collaborate with Azov xenophobesStubborn Denial & Questionable Charges over Racist Attack on Football Fans in KyivVovchansk Engineering Works: Dungeons on the Chechen ModelBodies of more civilians murdered by the Russians found in liberated Kharkiv oblast village Half a Year of the Full-Scale War in Kharkiv and the Kharkiv Region‘In a panic, people abandoned their bed-ridden relatives.’ А resident of Mariupol story about how people were coerced to leave for RussiaRussia has killed hundreds of civilians in Ukraine with banned cluster munitions Russia kills and maims children in Kharkiv and claims it ‘destroyed mercenaries’Ukrainian volunteer asphyxiated, beaten and half-starved in Russian ‘filtration’ concentration campAmnesty International’s 4 August statement. A response by the “Tribunal for Putin” initiativeDirector of Amnesty International in Ukraine resigns in protest calling controversial Amnesty press release "a tool of Russian propaganda’ Invaders stage fake referendum so they can accuse Ukraine of ‘invading Russia’ The First 150 Days of the Full-Scale War in Kharkiv and the Kharkiv RegionRussia is waging a bloody war against Ukrainian childrenHow are Russia’s missile strikes on civilians in Vinnytsia and Chasiv Yar not terrorism? Missing and Detained Individuals in the Kharkiv Region: An analytical review (24 February to 23 June 2022)
• Topics / The right to life

Kharkiv attack on foreign students was no ‘mass brawl’ 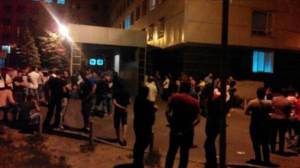 Ukraine’s Security Service head has claimed Russia was behind a brutal attack on June 11 in Kharkiv which other officials keep referring to, with equally unclear grounds, as a “mass brawl’.  With four Jordanian students the most gravely injured and other students telling journalists that the assailants obviously targeted foreign students, a thorough and transparent investigation is needed, not immediate shouts of ‘provocation’.

Nine people needed to be hospitalized after around 30 young men in black, most wearing balaclavas, rampaged through an area in Kharkiv where there are several student hostels, mainly accommodating students from other countries.

According to the police none of the nine people injured has life-threatening injuries.  Radio Svoboda, however, reports that six people - four Jordanian students and two Ukrainian nationals – remain in hospital with two of the Jordanian students in a grave state.  The assailants inflicted head and skull injuries and knife wounds.   There is no indication of the nationality of the four people now discharged.  This information would be helpful in understanding why the police keep asserting that “as a result of the attack Ukrainian nationals were hurt, among them there were also several foreign students”.

Jordanian Aburub Khusam told Radio Svoboda that the assailants attacked only foreigners, and that one Ukrainian was knifed because he “looked like a foreigner, and had black hair”.

There is also no clarity as to why the term ‘mass brawl’ keeps being used, since it is clear that this was an unprovoked attack by young men of athletic build and using weapons.  Those who couldn’t flee in time bore the brunt of the attack. The description 'athletic build' during the presidency of Viktor Yanukovych frequently referred to 'titushki' or paid thugs widely used in various attacks.  .

Witnesses report that the assailants attacked from behind, beating with sticks and stabbing not only people, but also dogs.  Jordanian student Ali Alesavekh told Radio Svoboda that the attackers had slashed the wheels of his car and broken windows.  He says that he and others fled, but that one person didn’t manage to get to the hostel.  The attackers began beating him and he was knifed in the back.

He says that the assailants split into two groups, with one attacking the students on Otakar Yarosh St., the other running towards the women’s hostel on Klochkivska St, outside which there is a café where foreign students hang out.

The assailants did not shout any slogans, etc. and finally ran off after the shouted order “Disperse”.

Five suspects are in custody, all Kharkiv residents and no older than 22.  They face charges of hooliganism, attempted murder and armed assault.

Ali Alesavekh stresses the need to find and punish the assailants.  He points out that the news of such an attack will spread far beyond Ukraine and could obviously deter young people from choosing Ukraine.

The police suggest only that the mass attack could have been organized to destabilize the situation in Kharkiv which is very close to Donbas, and has seen a sharp increase also in terrorist attacks.  They do not at present see any racial motivation.

Their suggestion was basically reiterated by Valentin Nalyvaichenko, Head of the SBU [Security Service] who asserted on the Shuster Live talk show that although local gangs were involved, the attack was instigated by the Russian security service”.

Social networks are not necessarily the most reliable sources of information, but it is worth noting a ‘Voice of the Nation. Ultra-right Radical’ VKontakte entry.  It is dated June 12, 15.55 (and provides a TV report that is totally out of date), but suggests that the attack was carried out by “patriots in Kharkiv”.

Banderivets.org.ua, the website of the far-right organization Tryzub, does not date its primitive hate speech, but claims that “instead of checking out cases of illegal activities by migrants, the people arrested Kharkiv residents. Unfortunately the criminal policy of multiculturalism in Ukraine is only intensifying and they’re preparing a future for us no better than in countries of modern Western Europe.  These criminal plans can only be stopped by revolution which will remove the regime of internal occupation. Ukrainian ways must prevail on Ukrainian soil!”.

The report then goes on to suggest that the actions of the Kharkiv people were instigated by the Russian security service and to note that the SBU also tried to pin the murder of “known Ukrainophobes Oles Buzina and Oleh Kalashnikov on Moscow agents.  “You get the impression that  Ukrainians generally can’t defend their own rights on their own land, otherwise they’re inevitably categorized as “FSB agents””.

Neither of these two far-right groups in any way suggests that they were involved.

An unprovoked attack with knives and batons is clearly bad for Kharkiv’s image and could deter students from coming to study.  That is cause for a full, honest and transparent investigation, not premature attempts to shift blame.