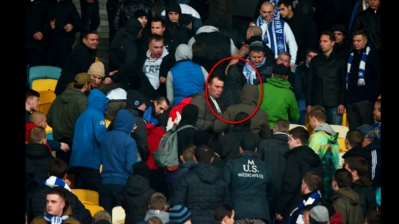 Over a month after a shocking racist attack on black football fans in Kyiv, the journalist initiative #Bukvy has published an article, backed by footage, implicating a police officer and parliamentary aide and members of the Azov Civic Corps (a support group for controversial Azov battalion) in the violence.  This comes after a top police official went on record denying any racist motives for the attack, and President Petro Poroshenko said that he had been informed it was all Russian provocation, aimed at discrediting Ukraine.

The police reported on Oct 23 that they had initiated a criminal investigation into what they described as a “fight between football fans”.  This, they said, was on the basis of Internet reports, since nobody had approached them over the attack.  Towards the end the police mention that “foreign football fans” were beaten, however no suggestion is made of any racist motive and the investigation is into alleged ‘hooliganism’ carrying a possible sentence of up to 4 years imprisonment.  Four days later, Oleksandr Tereshchuk, head of the Kyiv Police, told journalists that he did “not see any racism”, although he acknowledged that the conflict would be hard to call a fight.

Uefa has initiated its own inquiry after footage was passed to it by the football anti-racism watchdog Fare.  It is unclear what footage Tereshchuk’s denial of racist motives was based on, since the Guardian describes this footage as “appearing to show a group of Dynamo fans attacking four black men after spotting them in a neighbouring section of seating. When the men, who were also supporting Dynamo, tried to escape, they appeared to be attacked by other fans in the stand.”

It is not uncommon for victims of racist attacks to see no point or positively fear reporting incidents to the police.  The victims were not, however, difficult to find, and the young Congolese student whom an Associated Press journalist spoke with was in no doubt that the attack had been racially motivated.  The AP report says that “most of the victims were black, while three were white, some attacked after trying to protect black victims”.

Over a month after the incident, police assurances that they will carry out a full investigation have remained assurances, despite the ample video and photo footage available on the Internet.  In frustration, the #Bukvy journalist initiative has undertaken its own investigation and has come up with some disturbing allegations.

Presenting numerous photos on open access, they say they have identified police officer (only one is named); a parliamentarian aide; leaders of the ‘Azov’ Civic Corps and other Rodychy Dynamo fans.

The Olympic Stadium management has claimed that the attackers, from the 21st sector, were provocateurs who all got up and began the attack on black fans in the 19th sector after one individual received a call on his mobile.  This appears to be the information which President Poroshenko received.

The person who allegedly received the call is identified as a guy with a tattooed Odal rune which is popular among neo-Nazis.  His burley friend can be seen on footage beating up both black fans, and others who tried to defend them.

On the third photo, before the attack, a man in a grey jacket is greeting the tattooed man, on the fourth, the journalists say, he is in the thick of things, beating a black fan who was lying on the ground.

He is identified as 22-year-old Vladislav Oliynyk, a junior police sergeant and aide to MP Andriy Biletsky.  The journalists note that Oliynyk’s name is no longer mentioned on the Verkhovna Rada website, but he is still mentioned as a parliamentary aide elsewhere.   The same person, wearing an Azov emblem, can be seen on the fifth picture at an Azov street event.

The Azov volunteer battalion aroused concern from the outset because of the pronounced neo-Nazi views of its leaders, including Andriy Biletsky.  This was exacerbated when Biletsky stood for parliament.   Like other people who have defended Ukraine in battle over the last 18 months, he was elected, but has since been noted even denying, albeit implausibly, his previous anti-Semitic views.

The journalists believe that the person who can be seen first pushing his way towards four black fans and inflicting the first blow is one of the leaders of Azov. He is unnamed, but can be seen on photo 8 as one of four leaders of Azov, and on 9 speaking at an Azov event through a loudspeaker.

This person can be seen in photos No. 6 and 7, then on the video (28.08-28.13).  The same man is visible in the epicentre of the attack on the first black fan.  Photos 10 and 11 rather speak for themselves, with the same Azov leader with his arm around a guy with a swastika on his T-shirt, with all holding out their arms in what looks like a Nazi salute.

On this same video, at 28.30-28.40 you can see another person heading towards a black fan to hit him.  He is known among fans as Malyar [Painter], an ex-Azov Battalion fighter who is easily identifiable as he has a tattoo in the form of a skull which he demonstrates at virtually every match.  He is shown in the following three photos.  The journalists write that it may be specifically because of his running out onto the field during a European League semi-final match this Spring with a Celtic Cross (a used as a ‘white supremacy” symbol that the Dnipropetrovsk club was punished by having to play to home games without an audience.   The Dynamo fans had been supporting the Dnipro team and the authors note that Ihor Kolomoisky, the team’s oligarch owner and the founder of the European Jewish Parliament is unlikely to have appreciated the financial loss, as well as damage to image, caused by the neo-Nazi results of such friendship. 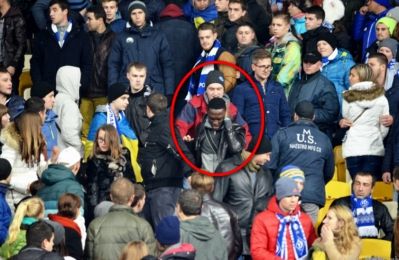 The person clearly seen in the picture above attacking a black fan and in another positively pursuing him as he tried to get away, is a regular among Rodychy fans.

Another person, seen at the centre of the events, is Serhiy Filimonov, known as ‘Perun’s Son’.  He is both an Azov Civic Corps leader and coordinator of the Azov battalion regarding the Crimea Blockade.

There is doubtless a lot more that can be established about the racist thugs who attacked black fans and people trying to protect them on Oct 20, but this is already significantly more than the police have achieved.

The authors quite legitimately ask what is going on and why the police have not managed to even sift through information so easily available?  Why has the President been fed information that makes him a laughing stock?  “Why is the club’s management protecting those who regularly cause trouble and jeopardize fans’ safety at the Olympic stadium?”

The information they have provided obviously needs to be verified, however the allegations regarding at least one police officer only fuel concern about the failure of the police and SBU to carry out a proper investigation, and make further delay inexcusable.