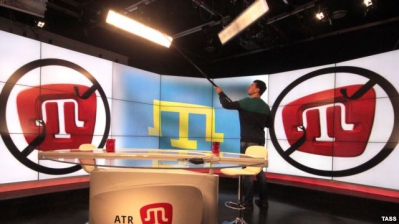 Two and a half months after ATR. the only Crimean Tatar TV channel in Crimea or the world, and most Crimean Tatar media were silenced in Russian-occupied Crimea,  ATR and children’s channel Lale have begun broadcasting from Kyiv.  They will be available to people in Crimea only on satellite television, but it is still an important move.  Speaking at a press conference on June 18, Refat Chubarov, Head of the Mejlis or representative assembly of the Crimean Tatar People, called it symbolic that the channel’s had resumed broadcasts on the first day of Ramadan.

“This television channel has become not only the spiritual and linguistic mouthpiece for Crimean Tatars, but also a virtual platform which the people united around. “

“I am becoming more hopeful that with such steps as these, we are not only helping all our people remaining in Crimea to retain their honour, self-respect, but we are also keeping them all in order to once more be united.  I am convinced that ATR’s role in this will be enormous”, Chubarov said.

The reaction from the occupation authorities in Crimea was typically inadequate, with the head of the committee on information policy and the media, Sergei Shuvainikov stating that ATR journalists would face liability if they violated Russian legislation in preparing their material.  He was opposed to the broadcasting of ATR from Kyiv, he said, since in his view “Ukraine is in a state of information war with Russian Crimea”.

It was announced on June 9 that the Crimean parliament had created an “autonomous non-commercial organization ‘Public Crimean Tatar television and radio broadcasting company’.   Refat Chubarov’s comment at the time was that this would be yet another instrument of propaganda for the peninsula’s occupation authorities ».

It is certainly difficult to believe in any other motives following the refusal to provide most existing Crimean Tatar media with re-registration.  As well as ATR and Lala, the Meidan FM radio station was forced off air, and the Internet sites 15 minutes and QHA left with no alternative but to move to mainland Ukraine.

Only QHA had its application for re-registration under Russian legislation rejected, with the Russian media regulator Roskomnadzor coming up with constant pretexts for returning the other applications without consideration.  When faced with international protest at the beginning of April over the silencing of ATR, Russia and Sergei Aksyonov, the leader installed by Russian soldiers denied all accusations, however Aksyonov had quite openly expressed his hostility to ATR.  On Feb 13, for example, he stated  that ‘hostile’ media who talk of a return to Ukrainian control, etc. have no place in annexed Crimea.

On March 31, as the deadline for re-registration (April 1) approached, hundreds of people gathered outside the studio, many very obviously upset.  The police made no attempt to conceal the fact that they were videoing everybody.  Although on that occasion they did not intervene, members of the Mejlis received visitations and formal warnings and 7 students and another person were detained and later fined for trying to make a video clip in support of ATR.