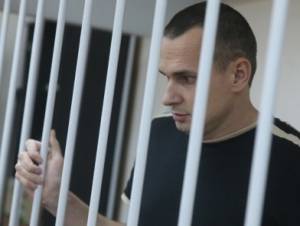 With so many renowned film directors calling for the release of their Ukrainian colleague held prisoner in Russia, Nikita Mikhailkov’s shameful silence over the ongoing detention of Oleg Sentsov has gone unnoticed.  Mikhailkov had, as reported, almost exactly a year ago to intercede on Sentsov’s behalf.  He did nothing.

In fact, scrutinizing the words spoken a year ago by Russia’s best-known film director and the President of the Moscow International Film Festival at its closing ceremony, they were dangerously vague.

As the latest Festival is underway, Russian human rights activist Zoya Svetova has addressed to Mikhailkov reminding him that last year he said that he would endorse the request made by Serhiy Trymbach, head of Ukraine’s Union of Cinematographers about an appeal to President Vladimir Putin to release Sentsov.

A year has passed.  She writes that while Mikhalkov, colleagues and guests are walking on the red carpet, giving interviews and enjoying the latest festival, Oleg Sentsov is being moved from imprisonment in Moscow to the SIZO [remand prison] in Rostov on the Don.  There “he will face trial for terrorist acts in Crimea which he never committed, did not plan to commit and which never took place.”

She reports that the investigator has not once allowed Oleg Sentsov to phone his family (including two children) in Crimea or to meet with relatives in Moscow, and has not allowed him to see the Ukrainian consul.  As reported here, the Russian authorities have tried to claim that both Sentsov and civic activist Oleksandr Kolchenko are Russian nationals.  Both men have denied this, and a case has now been lodged by Kolchenko’s lawyer with the European Court of Human Rights.

Svetova mentions just some of the considerable number of Russian and international film directors who have spoken out on Oleg Sentsov’s behalf.  A longer, though by no means comprehensible, list by Hollywood Reporter: Pedro Almodovar, Agnieszka Holland, Stephen Daldry, Bela Tarr, Wim Wenders, Mike Leigh, Ken Loach, Aki Kaurismaki, Volker Schlondorff, Betrand Tavernier, Andrzej Wajda and Krzysztof Zanussi.  Some have made video addresses about Sentsov’s prosecution:  ; ;  and others.

Support is expressed for Sentsov at all international film festivals.  See, for example, the wonderful demonstration of solidarity in Poland, the calls for his release at the Berlin Film Festival Berlinale, and many others.

It is only at the Moscow Film Festival, Svetova writes, that nothing is heard about Oleg Sentsov.  She has visited him throughout this last year and been impressed by his courage and strength of spirit.

She asks Mikhailkov and his colleagues to show solidarity with the Ukrainian film director who is held in a Russian prison for political reasons.  The trial in Rostov on the Don will be open, and Mikhalkov could turn up himself and see the absurdity of the charges laid against his colleague.

“I am writing you this letter so that when the judge of the North Caucuses district military court finds Oleg Sentsov guilty and sentences him to 15-20 years for a crime he did not commit, you don’t say that you hadn’t heard anything and don’t know anything about the case”.

Four opponents of Russia’s invasion and annexation of Crimea, were arrested in May 2014.  All four men were initially held without access to lawyers or their families in Simferopol, and were then taken to Moscow.

On May 30 the FSB  that Sentsov, Kolchenko, Gennady Afanasyev and Oleksy Chirniy were members of a Right Sector ‘diversionary terrorist group’.  The FSB claimed that they had been planning to carry out ‘diversionary-terrorist’ acts in Simferopol; Yalta and Sevastopol, and in the last of these to destroy a number of buildings, railway bridges and power lines.  They had supposedly intended to detonate home-made explosive devices during the night before Victory Day near the Eternal Flame and near a monument to Lenin, and were also accused of arson attacks on a pro-Russian organization’s building on April 14 and the United Russia offices on April 18.

The FSB announcement coincided with reports on pro-Kremlin television showing ‘confessions’ given by Afanasyev and Chirniy.  Afanasyev appears to have cooperated with the investigators from his ‘confession’ on, providing testimony against Sentsov.  He was ‘tried’ in secret in December 2014, and received the minimum sentence possible for terrorism charges (7 years).

Chirniy’s position remained unclear for a long time, however he finally agreed to cooperate with the investigators and was sentenced (in an open but extremely quick trial) on April 21 to the same 7 year minimum sentence.

He was found guilty of planning to organize explosions on the night before Victory Day [May 9] near the Eternal Flame and a monument to Lenin in Simferopol, as well as arson attacks on the Russian Community of Crimea and the offices of the United Russia party.

Kolchenko and Sentsov have been declared political prisoners by the Memorial Society, and other human rights organizations and there have been repeated calls from the Parliamentary Assembly of the Council of Europe and numerous other organizations for their release.

The court hearings with Sentsov have been widely publicized and have shown the 39-year-old film director and solo father of two young children totally unbroken and contemptuous of the travesty in which he has been cast as ‘terrorist’.  He stated recently that the 20-year sentence was fixed from the outset, and that he does not fear it  (see:

Oleksandr Kolchenko is less well-known, but the charges against him are no less absurd.

Both men are facing sentences of up to 20 years despite no evidence or even credible charges.  They are very likely to receive maximum sentences effectively for having remained unbroken and refused to ‘confess’ to crimes they never committed.