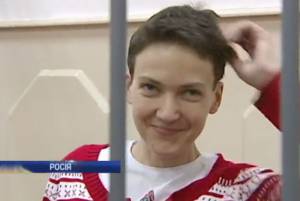 Russia is insisting on holding the trial of captured ex-pilot Nadiya Savchenko in a Russian city bordering the area of Ukraine under Kremlin-backed militant control.  There are no legitimate grounds for this move which will seriously hinder access to the trial, and could, Savchenko believes, put her mother and sister in danger. Her formal appeal* to Russia’s Prosecutor General to move the trial to Moscow where all investigative activities and assessments were carried out has effectively already been rejected.  One of her lawyers announced late on Friday afternoon that Savchenko has already been moved from the remand prison in Moscow and is on her way to the Rostov oblast.

Russia’s Investigative Committee announced on July 6 that the investigation carried out by its Department for investigating crimes linked with the use of prohibited weapons and methods of warfare was complete.  The charges unexpectedly proved to have been changed from abetting the killing of two Russian journalists, to actual murder.  This major difference in terms of likely sentence was not based on any change in the material of the case, nor even the investigators’ claims regarding Savchenko’s alleged actions.

The other unwelcome change regards the assertion that Savchenko ‘voluntarily crossed’ into the Rostov, rather than the Voronezh oblast.  This makes it difficult to understand why she was initially held and interrogated in a Voronezh hotel and then remanded in custody by a Voronezh court, but is being used as an excuse for holding the trial in the Russian Donetsk, a city in Rostov oblast.

The defence has proof that Nadiya Savchenko had been taken prisoner before the two Russian journalists were killed.  Savchenko is adamant that she was taken by the militants across the border into Russia in handcuffs and with a bag over her head.

In her appeal, Savchenko focuses mainly on the fact that Donetsk is extremely close to the Donbas border area under the control of the militants.  She calls Russian Donetsk “the loading point and base supplying the pro-Russian militants fighting in the east of Ukraine and heading there from Russia”.   The fact that the area is “effectively in the zone of military action” will place her sister, a chief witness, and her elderly mother in direct danger.  She herself wrote a will before leaving Moscow.  “If they want to set up this trial travesty where there’s a war on, that means they’re capable of anything, ” she told human rights activist Zoya Svetova on the eve of her transfer.

The argument has already been ignored by Russia’s Prosecutor General, but her appeal to the UN Secretary General and Parliamentary Assembly of the Council of Europe [PACE] should be heeded since the move to Rostov oblast directly affects the access to a high-profile trial of a Ukrainian MP and PACE delegate.

Mark Feygin, one of Savchenko’s lawyers,  reported on July 13 that Russian Donetsk is regarded as the border area.  Even the defence lawyers will need to get passes from Russia’s FSB [Security Service] to attend their client’s trial.  Judging by the rules for such zones, anybody wishing to attend the trial will need to go through this procedure.

The trial’s location in this zone, Savchenko told Svetova, means that the witnesses for the defence from Ukraine will be prevented from attended.  So too, she suspects will three witnesses from Voronezh.  These three hotel employees were even witnesses for the prosecution since they obligingly testified that Savchenko had arrived by herself at the hotel.  Highly inconvenient ‘testimony’ now, given the investigators’ new version.

Visitors to the trial are likely to witness all kinds of activity within Russian Donetsk and the surrounding area that Moscow continues to deny any involvement in.  This reason alone makes it seem likely that the location within a border zone will be used as a pretext for restricting access to the trial.

It would not be the first time that Russia has attempted to try Savchenko in secret.  The investigatorsfirst tried to get hearings held behind closed doors back in October 2014.  Feygin was also recently threatened with criminal proceedings for having posted the testimony given by militant leader Igor Plotnytsky.

It is easy to see why the prosecution would not want Plotnytsky’s two witness accounts made public.  One damning moment is, effectively, the reason that Plotnytsky was questioned a second time.  During the first interrogation, he mentioned various items found in Savchenko’s rucksack, and mentioned binoculars, without giving detail, although he was quite specific about other items.  Months later he ‘remembered’ an enormous amount about the binoculars and claimed that there had been a radio device [like a walkie-talkie], and even mentioned a display screen with keys to press on this device.  Although all other items were intact, the binoculars and radio device were nowhere to be found.

More details from the testimony Moscow wanted secret at: Savchenko material shows how Russia concocted ‘case’ and what it can’t conceal

Savchenko is facing a possible 25 year sentence, despite having an unbreakable alibi. She is alleged to have climbed a satellite communications tower and seen the two journalists three and a half kilometres away, and informed Ukrainian soldiers.  No trace has been found of the binoculars needed to make out the two men she is alleged to have ‘murdered’, nor the radio device to communicate their whereabouts.  Savchenko is charged in addition with having illegally crossed into Russia despite having been captured by the militants a week earlier.  They are supposed to have decided to release her as of no importance and another mouth to feed just three days after they posted a video of her as their ‘captured trophy’ on the Internet.

The need for maximum coverage of this ‘trial’ cannot be overstated. 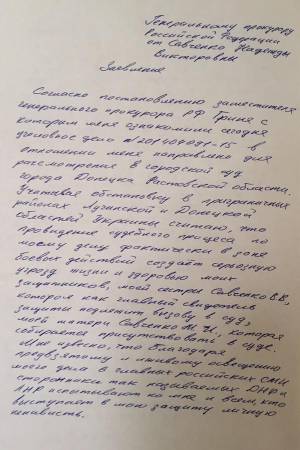 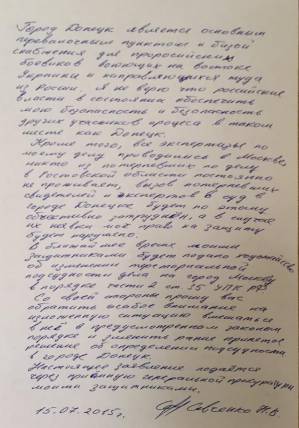 Nadiya Savchenko’s letter to the Russian Prosecutor General’s Office.   A full translation of her letter to the UN Secretary General and PACE can be found here