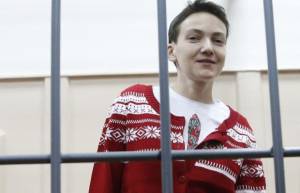 Nadiya Savchenko has been visited by Russian MPs trying to persuade her to ‘confess’, be convicted and then – supposedly - pardoned.  There seems no chance that she, Oleg Sentsov and Oleksandr Kolchenko will agree, but every reason for Moscow to want to avoid the lawlessness of each of these cases on public trial.  It is no accident that Savchenko’s investigators tried to get the trial held behind closed doors.  They have a lot to hide.

Nadiya Savchenko was captured by Kremlin-backed militants in Ukraine and abducted to Russia, where she was promptly placed in detention.  The former military pilot, now Ukrainian MP and delegate to the Parliamentary Assembly of the Council of Europe [PACE] remains in custody despite having an irrefutable alibi for the supposed crime she stands accused of involvement in.  All of this will certainly come out in a trial which would be attended by PACE colleagues, foreign diplomats, etc.  Small wonder that Moscow is both dragging out the so-called investigation and is using MPs to try to avoid even more scandalous publicity.

Vera Savchenko, Nadiya’s sister explained on Wednesday that, according to her sister’s lawyers, there have recently been a number of visitations from deputies of Russia’s State Duma.  The MPs do not name themselves, but given the flurry of activity around their visits, they are seen by the SIZO [remand prison] staff as important.   The message they are passing on is that Nadiya should admit guilt, get a sentence and then be pardoned.  This supposedly is needed to reconcile Ukraine with Russia”.   Apparently this same message was passed on by a Russian public figure known as Doctor Lisa.

Savchenko is not the only Ukrainian facing prosecution in Russia in high-profile cases where convictions and long sentences will demonstrate to the world only the degradation of Russia’s justice system.   Crimean opponents of Russia’s annexation  film director Oleg Sentsov and civic activist Oleksandr Kolchenko have been in Russian detention for 11 months on fabricated ‘terrorist charges’.   Kolchenko was finally presented with his indictment at the end of March.  It accuses him of ‘terrorism’ with this carrying a sentence of up to 20 years, but of only one act – throwing a Molotov cocktail into the deserted offices of the United Russia party in Simferopol.   Sentsov’s indictment was due on April 10, and according to his lawyer, has not yet emerged.  In his case, there is not even an act of petty hooliganism to pin on the 38-year-old world-known film director and solo father of two.

Both Sentsov and Kolchenko have repeatedly stated that they were tortured and threatened in order to extract ‘confessions’ from them.  Two other men – Gennady Afanasyev and Oleksiy Chirniy – gave such confessions, and it is known that Afanasyev testified against the others in a secret court ‘trial’ in December.

A recent interview given by Dmitry Dindze, Sentsov’s lawyer who suggested that both Sentsov and Savchenko, should ‘confess’ in the hope that the Russian authorities would return them to Ukraine probably highlighted the pointlessness of all Moscow’s efforts to hide the squalor of these prosecutions by ‘confessions’.  Kolchenko’s lawyer, Svetlana Sidorkina immediately dismissed such an idea, not only because it would simply play into Russia’s hands, but because Kolchenko would not agree to it.  Savchenko’s rejection of the mere suggestion was swift and angry, saying that she would never confess to crimes she had not committed.  While Sentsov during a recent appeal hearing regarding his detention made it very plain that he has no illusions about Russian justice, but that he remains unbroken and unafraid.  “I’m not afraid of the threats, the hints. And this sentence of 20 years doesn’t frighten me, because I know that the rule of the bloody runt in charge of your country will end sooner”.