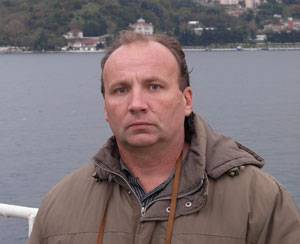 Sevastopol marathon swimmer Oleh Sofianyk has decided to stay in mainland Ukraine after being summoned for questioning about another Ukrainian, Yury Ilchenko who is in detention, seemingly for an article opposing Russia’s occupation of Crimea. Sofianyk has also openly expressed his opposition and fears he will be arrested if he returns.

The 51-year-old swimmer is known beyond Ukraine and has taken part in many marathon swimming events.  The 51-year-old was apparently a dissident in Soviet times and faced KGB persecution.  Like Ilchenko, he made no secret of his opposition to Russia’s annexation of his native Crimea.  Although facing FSB harassment, and FSB questioning as to why he didn’t take Russian citizenship, he had until recently managed to remain, He to Censor.net that he had been monitoring rights abuses in Crimea.  This, he said, was needed as others who would normally be reporting abuses are either imprisoned or have left Crimea.

He to Novoye Vremya that the situation changed towards the end of July when he was already on his way home to Sevastopol from a marathon event abroad.  He received a call saying that enforcement officers had appeared at his flat several times, forced their way in, carried out a search and left a note.  The note was from Mikhail Novoseltsev, head of the ‘Centre for Countering Extremism’ in Sevastopol.  Sofianyk called him and asserts that Novoseltsev said the following:

“We came to you because of the arrest of your friend Yury Ilchenko, the Sevastopol blogger. He was arrested on July 2 for posts on [the social network] VKontakte. He wrote anti-Putin statements and articles.  He has been in the Simferopol SIZO since July 2.”  Novoseltsev was not willing to simply talk on the phone with Sofyanik, insisting that he come for a proper talk.  According to Sofyanik, Novoseltsev effectively confirmed that he could face arrest, and unsurprisingly Sofyanik decided not to go back.

Sofyanik says that Ilchenko also received several visitations from Novoseltsev during the winter.  He was interrogated many times and forced to delete material from VKontakte and Facebook.

Sofyanik’s account of such harassment and of the events surrounding Ilchenko’s arrest makes it quite clear why Ilchenko has been targeted. This is of importance since the investigators are now also claiming that he abused his partner’s 11-year-old daughter.

Sofyanik says that Ilchenko was planning to go on honeymoon to Bulgaria at the beginning of August.  Instead, he is in SIZO [pre-trial detention prison] and his partner has been pressured into writing a report claiming that he molested her daughter.  Sofyanik points out that these are all KGB methods.

He says that Ilchenko is charged under Article 282 of the Russian Criminal Code – ‘extremism’ for posts on VKontakte in January, and Article 340 over the alleged molestation.  Together that could get him a 20 year sentence.

This is a vile regime, he adds, that will use any methods, however dirty.  It’s worse than in Soviet times where the KGB will talk with a person once or twice and only later, if he didn’t change his actions, arrest him. Now there’s none of that, he says, they just turn up and take everything.

He calls the FSB a criminal-political gang, who also try to get some kind of commercial benefit.  One family of Crimean Tatars had 2 or 3 thousand dollars in savings kept in the house.  There were no documents for the money and the FSB officers just pocketed it.

Russia has taken all measures, including threatening the Crimean Human Rights Field Mission with being declared an ‘undesirable’ organization, and therefore illegal, to hide rights violations in Crimea.   As reported, it was difficult to find out any information about the charges against 37-year-old Ilchenko.  Radio Svoboda’s Crimean Service  with his father a week after his son was arrested.  Gennady Ilchenko explained that a search had also been carried out of the home they share. It lasted 4 hours and produced nothing (more details here).

Gennady Ilchenko’s account of the earlier harassment his son has faced, and the reason for his arrest, coincide with that given by Sofyanik.  The added ‘molestation’ charge appears to be a chillingly cynical reminder of past methods against dissidents.  So, in fact, does this whole case against a Ukrainian expressing his opposition to Russia’s invasion and occupation of his homeland.