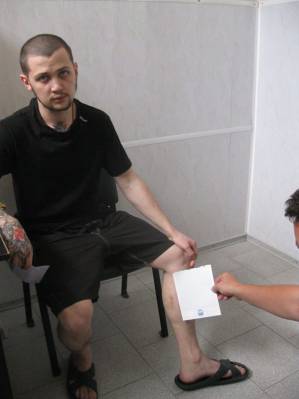 Gennady Afanasyev, one of the four opponents of Russia’s annexation of Crimea, arrested by the FSB on terrorism charges was almost certainly beaten by an FSB officer after he retracted his evidence against renowned Ukrainian film director Oleg Sentsov and civic activist Oleksandr Kolchenko.

Afanasyev’s lawyer Alexander Popkov in the SIZO or remand prison in Rostov on the Don on Aug 12.  Afanasyev told him that the same FSB officer who had threatened him on July 31 had turned up at the SIZO on Aug 6.  On this occasion he demanded that Afanasyev state that he had been forced to retract his testimony against Sentsov.  Afanasyev did not speak with him, and sat reciting prayers.  The officer got annoyed and hit him hard on the lower part of the leg.  Popkov confirmed that you can see a large hematoma there, and contacted the Public Supervisory Commission for the Rostov oblast.  Two members of the commission (which is entitled to visit prisoners and monitor their treatment) responded immediately.  They visited Afanasyev who repeated his story and also got the doctors in the SIZO to record the injury.

This information has now been sent to the Investigative Committee.  Judging by the latter’s failure to react to the allegations constantly made by both Sentsov and Kolchenko that they were tortured, the latter can at best be expected to do nothing.  Popkov says that there’s little that can surprise him, but that the brazen cynicism in this case has staggered him.  Afanasyev is regularly visited by his lawyer and members of the supervisory commission, and media attention is focused on the case.

It is a relief that earlier reports that Afanasyev had been moved from Rostov on the Don have proven false.  Even without the FSB officer’s behaviour, there are strong grounds for concern that he could face reprisals for his courage in court on July 31.

As reported, Afanasyev and Oleksy Chirniy had both ‘confessed’ and ‘cooperated’ with the investigators for a minimum 7-year sentence.  Their testimony is absolutely all that the prosecution has against Sentsov and virtually all against antifascist activist Kolchenko.  The latter did assist in a  firebomb attack late in the night on the office of the United Russia party, however this does not constitute the act of terrorism he is charged with.

At the trial of Sentsov and Kolchenko on Friday, July 31, Afanasyev told the court that he was not only refusing to testify at the trial, but that he was retracting all previous testimony which had been given under pressure.

Afanasyev later explained to Popkov that he had been arrested by masked men as he was heading for the Victory Day parade.  They began beating him and took him away, in handcuffs and with a bag over his head, in their car.  They demanded that he name certain people and give testimony against Sentsov.

He was subjected to torture, including with the use of a gas mask and electric shocks.  Later in Moscow and Rostov on the Don, he was warned that if he didn’t do what he was told, namely refuse to testify in court but stand by earlier testimony, that he would be sent to the furthest prison they could find and something bad might happen to his mother.

The following is from Mediazona’s transcript of the hearing on July 31.

Asked if he knew the men in the ‘aquarium’ or defendants’ box [i.e. the defendants Sentsov and Kolchenko] he answered:

“All of Ukraine knows Sentsov. I don’t know the second person”.

“Afanasyev then stated that he refuses to testify. The witness explains that  everything said earlier was said under duress. At the witness stand, Afanasyev’s hands are shaking. One is clenched in a fist behind his back, the other in a handcuff changed to the person bringing him. Sentsov and Kolchenko applaud him from their box.

“Glory to the heroes!” - Afanasyev answers’

The strong grounds mentioned earlier for believing that Afanasyev could now be in danger have already proven well-founded.  The decision to retract his evidence cannot have been taken lightly.  If, as seems likely, it is the retraction and account of his torture that are true, then Afanasyev should surely also be recognized as a political prisoner.