Savchenko demands that everybody give testimony using a lie detector 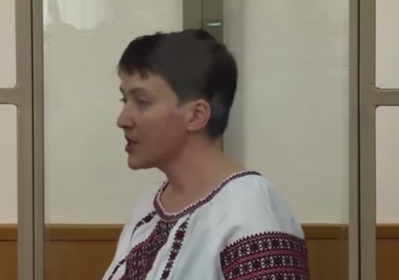 Nadiya Savchenko is probably facing a 25-year sentence at the end of the ‘court trial’ which began on Sept. 22, but the customary “if she is found guilty” seems entirely out of place.  Nobody seriously believes that Leonid Stepanenko and two other judges, seemingly from the Russian Donetsk City Court, are any more than actors in the spectacle unfolding.  So too were the unidentified individuals in the courtroom used as the excuse for not allowing journalists to watch the hearing.  The press were forced to watch by video.

It should be noted that none of the above is in any way contentious.  On Sept 17, an EU statement yet again reminded Russia that one of the requirements of the Minsk Package is the “release of all hostages and illegally detained persons”.  All democratic states have demanded the release of Savchenko, Oleg Sentsov, Oleksandr Kolchenko and other “illegally detained Ukrainian citizens in Russia and on the illegally annexed Crimean peninsula”.

The 34-year-old former military pilot and now Ukrainian MP was brought to the court in (Russian) Donetsk by police van from Novocherskassk 150 kilometres away.  There is no good reason for the trial to be held in this obscure city in the Rostov oblast, which has presumably been chosen in an attempt to minimize international attention to the case.  As reported, at a hearing on jurisdiction on Aug 21, the judge claimed that the fact that witnesses in the case live in Moscow, Moscow oblast and in Voronezh (and nobody in Russian Donetsk) was not sufficient reason for moving the trial.

As during the first preliminary hearing, the security appears to have been, as defence lawyer Mark Feygin said, “like Fort Knox”, with armed police guarding all the roads and entrances to the court.

Savchenko told the court that she obviously denied all guilt.  She demanded to be allowed to give all her testimony using a lie detector, and that others do the same.

Mediazona reports that defence lawyer Ilya Novikov applied for all supposed ‘victims’ who are Ukrainian nationals to be removed from the case.  He pointed to the claim made by the head of the Investigative Committee, Alexander Bastrykin, in a recent interview about Russia’s alleged ‘universal jurisdiction’ to investigate such cases.  Novikov disputed this, saying that Russia has a Criminal Code which restricts ability to view such cases and makes ‘universal jurisdiction’ impossible.

As unfortunately expected, the application was rejected by the presiding judge without any pretence of consultation with his colleagues.

Novikov also challenged the list of so-called victims, saying that there were grounds for believing that some had been taking part in the fighting.  “Their deaths are evidence that the shelling was not against civilians, but against armed fighters”.

The defence demanded that the case be sent for further examination, and said that the Investigative Committee knows that it was fighters who died in the place shelled, not civilians, but finds that an inconvenient fact.

The prosecutor then alleged that the defence was working against Savchenko’s interests and should be removed from the case.  This was also not upheld.

A major part of the proceedings were taken up with the reading of the 180-page indictment.   Savchenko was asked if it was all clear and if she had a response.  She did: “It’s all lies”.  It was here that she demanded the lie detector.

Nadiya Savchenko again reiterated in court that she had been abducted from Ukraine and taken by force to Russia.  She had not seen the two journalists whose deaths she is accused of complicity in and she has never in her life shot at people who are unarmed.

Two people with victim status – the widow of Anton Voloshin, the cameraman who died on June 17 in mortar fire and Voloshin’s father - were questioned by video from the Moscow region.  It was clear from their accounts, in part responding to questions from Savchenko who changed into Russian, that Voloshin had not been either trained or properly equipped for reporting from an area where fighting was underway.  He was not, for example, wearing a bullet-proof vest.

The next hearing is scheduled for Sept 29.