Vital Probe of Odesa May 2 Tragedy stymied because of questions answered?Movement at last on Odesa 2 May investigationRussia Today, or why Odesa May 2 is different from BaltimoreOdesa May 2 Investigation: A Failed Test for Ukrainian JusticeMore Evidence against Incendiary Lies about Odesa 2 MayContinuing Obstruction of Odessa May 2 InvestigationPropaganda that KillsOdessa May 2 trial turns into farce as Russia continues ‘massacre’ propagandaBad Start to Crucial Odessa May 2 TrialsRussia’s New Odessa FileOdesa "Massacre" Propaganda vs. the FactsDangerous silence over police role in Odessa May 2 eventsWithout Double StandardsWhat Russian TV won’t show about the events in OdessaCVU: Pro-Russian activists sold information about pro-Ukrainian activists in OdessaUHHRU condemns police role in Odessa tragedy"US guilty of genocide": Kremlin supports anti-Maidan festival with links to the German far rightProsecutor suspected of involvement in Odesa May 2 tragedyUkrainian authorities slated over Odesa May 2 investigationUkrainian researcher savagely tortured for ‘confession to treason’ against Russian proxy ‘Donetsk republic’
• Topics / Politics and human rights

Odesa 2 May Suspect: We were financed by Moscow 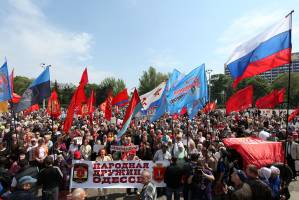 Serhiy Rudyk, one of the men facing charges over the May 2, 2014 disturbances in Odesa, is in no doubt that the anti-Maidan protests on Kulikovo Pole in the Spring of 2014 were paid for “by Moscow”*.  Rudyk, whose organization cannot be suspected of an anti-Russian bias, names the specific amounts paid for living at the anti-Maidan camp, and mentions rumours that Moscow paid 2 million dollars for the entire ‘Kulikovo Pole project’.

Rudyk was speaking very openly with a representative of the May 2 Group, a non-partisan civic initiative,  investigating the tragic disturbances and fire at the Trade Union building on Kulikovo Pole.  While remaining the assertions of one individual, Rudyk’s account does seem to correspond with other reported findings and hypotheses presented by the Group over the last year or more.

Rudyk’s group – Odesskaya Druzhyna [OD] – was one of various anti-Maidan groups, pro-Russian and pro-federalist, involved in the Kulikovo Pole protests and demonstrations in Odesa in March and April against the post-Maidan government in Kyiv and in support of ‘federalisation’. The core of OD, according to Serhiy Dibrov from the May 2 Group, was made up of activists from ’Slavonic Unity’, a movement with pronounced neo-Nazi views.   Rudyk is now convinced that they were set up, and used, and states at the outset that what the organization was supposed to be, and what it actually was, were two different things.

Odesskaya Druzhyna emerged, he asserts. on March 8, 2014 as a “military-patriotic camp” on Kulikovo Pole aimed at “educating youth” and “defending Kulikovo Pole” from the ultranationalist Right Sector.   They also “accompanied” all demonstrations and marches, including, for example, a march in favour of a referendum on March 16, the day of the pseudo referendum on Crimea’s status used by Russia as pretext for annexing the peninsula.  Rudyk asserts that OD were promised all kinds of training, uniforms and special vests.  When the interviewer notes that such vests are regarded as special equipment, Rudyk confirms that yes, initially, OD was supposed to be about establishing ‘law and order in Odesa’.  At whose initiative is not specified.

Rudyk claims a distinction between those who were in OD for ideological reasons and those who became part of the tent camp once it became clear that they would get paid for spending the night there.  From around 4 people, the number rose dramatically because of the 50 (initially 150) UAH paid per person per night.  Rudyk was not in Odesa when, during the night of April 30, the OD camp moved from Kulkovo Pole to another location altogether.  He mentions the rumours that the leader of OD received 150 thousand dollars for moving the camp.

Some of those who took part in the disturbances and who were on Hretska St, where four of the six who died of bullet wounds were killed  were former OD members disgruntled over the OD move. While Rudyk states that they were annoyed over the excessive financial aspect to OD activities, it is also clear from his words that many of them were unwilling to relinquish the chance to beat up pro-Ukrainian activists during the coming pro-unity march.

He and other OD members were in the Athena shopping centre on May 2 where, he says, they were handed petrol free of charge for making Molotov cocktails.  They were basically surrounded and eventually arrested and, briefly, placed in a remand prison.  Around 20 people are facing charges of involvement in the disturbances.  As reported, the May 2 Group has expressed concern over the charges and believe they could with just as much justification be laid against most participants in the riot that afternoon.

The May 2 Group reported quite early on that there were grounds for believing money had been paid for moving from Kulikovo Pole which the authorities and police wanted cleared before Victory Day on May 9.

The assertion that Russia was financing the anti-Maidan protests in Odesa is harder to prove, but difficult to reject.  By mid-March Russia had carried off its invasion and annexation of Crimea and within weeks a not dissimilar scenario appeared to be unfolding in Donbas, as well as in Kharkiv.  One of the people who fled Sloviansk after it was seized by Kremlin-backed militants spoke of how everybody knew that the people seizing power were Russian.  One of the key figures in the seizure of control and subsequent fighting was Igor Girkin, a Russian military intelligence officer, who had recently played a major role in Russia’s occupation of Crimea.  In Kharkiv the situation was almost comical with the militants trying to seize control of the opera house, believing it to be the city administration.

Russian President Vladimir Putin’s ominous pronouncements in April about a so-called ‘Novorossiya’ including the Kharkiv and Odesa oblasts only intensified anxiety that these two oblasts were likely to be the next to fall.

Both Kharkiv and Odesa have suffered the most from terrorist acts over the last 18 months, and ongoing attempts are underway to push the Besarabian People’s Council, a Russian-registered separatist organization.  This ‘Council’s’ claims that it is defending ‘minorities’ in the Odesa oblast have been condemned as provocation by the most prominent minority groups of the region.

It is very widely believed, including by the members of the May 2 Group, that the bloodshed on May 2, 2014, was the jolt needed to stop Odesa slipping into the same abyss as Donbas.  Whether this was the case will thankfully never now be known, but it is significant that even one of those who played an aggressively active role in pushing the ‘Russian Spring” is quite clear who was pulling the strings.

* There are three videos:

The May 2 Group has produced a film about the events of May 2, 2014 which can be viewed with English subtitles here