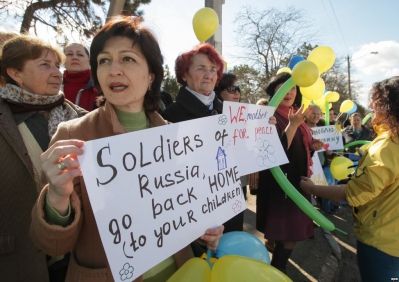 A protest in the first month after Russia’s invasion, but before annexation. It would now get participants arrested

BBC journalist John Simpson has ‘uncovered Crimea’s charms’ and a quite staggering degree of contempt for international law and human rights.  In , he encourages people to do as he did: break the law, effectively whitewash Russia’s invasion and forced annexation of Crimea and wax lyrical about the charms of Crimea, while ignoring extremely serious human rights concerns under Russian occupation.

Simpson alleges that “there are moments in international affairs when the clouds part, and the sun illumines an area which has been murky for years. They have recently parted over the magical peninsula of Crimea; and my advice is, take advantage of it.”

Wonderfully lyrical and frighteningly nihilistic.  The clouds in this case “did not part” but were wrenched apart, and a cursory glance at the globe would cast a better light on the number of countries and borders which can with equal justification, or none, be dismissed as ‘murky’.

Russian President Vladimir Putin couldn’t have phrased the attempt in the following paragraph to justify Russia’s annexation better, although the two men’s arguments are identical.  Crimea was allegedly always “Russian”, and therefore it was “that engaging old crook Nikita Khrushchev” who first did the fiddle.  So what then, if Russia “by foul means, grabbed it back”?

Simpson might like to consider that Andrei Zubov, the history professor from Russia’s prestigious MGIMO Institute who was dismissed for criticizing Russia’s land grab, that he would have failed any student who argued that Crimea had always been Russian.  Should the BBC journalist feel the need to delve into the history of the area.  Observance of the law, however, is not optional.

Simpson could argue that he does not incite people to break the law.  He simply avoids telling his readers that this is precisely what they will be doing if they take his advice and visit Crimea via Russia.

This is not through lack of knowledge, and the Telegraph even provides a link to the about Crimea.  This states unambiguously that:

“From 4 June 2015, to enter or exit Crimea, foreign nationals will need to provide their passport and a special permit issued by the State Migration Service of Ukraine.”

Simpson was thus in breach of Ukrainian law and is advising Telegraph readers that they should behave similarly.

It is worth noting that a Russian NGO and its head are now facing harassment and threats of criminal prosecution for warning people of the legal implications of visiting Crimea.  In June the consumer rights society ‘Public Control’ published information which accurately described Crimea as ‘occupied territory’ and warned of the legal ramifications of any trips undertaken without Ukrainian permission.   Within hours, the Russian Prosecutor General’s Office  and the website had been blocked.  A summary in English of this advice can be found here.  Unlike the BBC’s foreign correspondent, we would recommend that readers heed it.  There is nothing murky about international law and Ukraine has every right to impose restrictions on territory which has been illegally occupied.

Simpson’s account of Crimea’s beauty and his obvious interest in literature might have inclined him to consider some of those who have suffered most profoundly through Russia’s occupation.  These include Crimean filmmaker Oleg Sentsov whom a Russian court has sentenced to 20 years imprisonment after a totally ‘Stalinist trial’ of him and another opponent of Russia’s annexation, Oleksandr Kolchenko.

One blogger, Yury Ilchenko is currently in detention over an article criticizing annexation, and a EuroMaidan activist Oleksandr Kostenko has been imprisoned for 4 years on totally surreal charges.  All independent Crimean journalists have effectively been driven out of Crimea and virtually all Crimean Tatar and Ukrainian media have been stifled,  Just in the last few days the first two Internet publications daring to present alternative points of view and information about human rights abuse have been blocked. The list is certain to be extended.

The Crimean Tatars – the indigenous people of Crimea – are facing constant harassment and persecution, with most leaders in exile and one – Akhtem Chiygoz – imprisoned on legally nonsensical charges.

Simpson has not followed the example presented by other visitors to Crimea, such as from the far-right Bulgarian Ataka Party, who made a point of ‘recognizing’ Crimea as Russian.  Members of the far-right Hungarian Jobbik party are also due shortly and can be expected to be just as approving.  Russia is currently going all out to convince its own population and the international community that all is well, and Crimea ‘Russian’.  A group of Polish students were almost certainly conned into visiting Crimea, rather than St. Petersburg last week precisely in order to provide good camera stunts.   It is galling that a BBC correspondent should now be so obligingly helping Russia’s propaganda efforts.