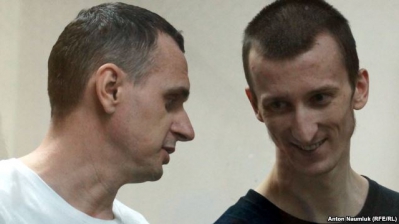 The men were not brought to the court, but watched the proceedings by video link from the SIZO or remand prison in Rostov on the Don.  Sentsov refused to stand when answering questions from the court.  “I don’t usually stand when I watch television, your honour”, he responded when the judge tried to reprimand him for this.

The men’s lawyers had asked the court to either overturn the sentence or to send the case for reconsideration.  They pointed out that the sentence had been based largely on the testimony previous given by Gennady Afanasyev, one of the two other opponents of Russia’s invasion and occupation of Crimea, arrested and tried in this ‘case’.  Afanasyev appeared in court on July 31 and stated clearly that he retracted all previous testimony as given under torture.  This was ignored by the first instance court, as were numerous flagrant procedural irregularities, both during the investigation and the trial.

Afanasyev’s account of the torture he was subjected to came after consistent allegations from Sentsov and Kolchenko of similar methods used against them to extract ‘confessions’.  The fourth person Oleksy Chirniy is known to have previously complained that he was pressured into ‘confessing’.  He refused to testify in court, meaning that he could not be cross examined.

Sentsov and Kolchenko both refused to speak during this fast-track ‘appeal hearing’.  Kolchenko said that he had said everything at the trial, while Sentsov openly demonstrated his view of the event.  “I have nothing to say, you have a very boring television program”.

It should be said that after the travesty of a trial, there were few illusions about the appeal hearing.  Sentsov’s lawyer Dmitry Dinze told Grani.ru that they will now be seeking to have the men sent to serve the sentences in Ukraine.  He noted, however, that this will be difficult since Russia is claiming that they are Russian nationals.  He believes there is a 50-50 chance that the men could be exchanged for somebody.

Sentsov and Kolchenko first, and then Afanasyev  have been recognized as political prisoners by the authoritative Memorial Human Rights Centre.  Russia’s most prominent human rights defenders, writers and others responded to the monstrous sentences passed on Sentsov and Kolchenko on Aug 25 with a stark warning that “The country has again taken the road of political repression”.   They gave a blistering assessment of the trial which is only confirmed by the farcical ‘appeal’ hearing on Nov 24:

“The fabricated trial of Sentsov and Kolchenko on charges of terrorism which ended in a monstrous sentence can only be compared to the political trials of the Soviet era. This trial was open and all the circumstances are known to the public. There was no crime, as in, no acts of terrorism. An arson attack on a door, the only specific action which the defendants were charged with  (without sufficient grounds and proof) would, according to Russian legislation, be at very most treated as hooliganism.  The rights of all the defendants were seriously violated, with this even including beating and torture during and following their arrest. The main witness for the prosecution stated in court that he had been tortured and retracted his testimony given under torture.

What is this, if not ideologically motivated state terror?  The aim is to intimidate and suppress any peaceful resistance in Crimea from those who regard themselves as citizens of Ukraine and oppose Russia’s annexation of Crimea.”

All four men, it must be said, do not just regard themselves as Ukrainian citizens.  They are Ukrainian by birth and by right, and it is Russia which is in breach of international law in claiming that the men ‘automatically became Russian citizens’ after it illegally annexed their native Crimea.

The four men were arrested in May 2014, and held incommunicado and without access to lawyers in Simferopol, for up to 2 weeks before being taken by force to Moscow where on May 30 the FSB [Russian Security Service] claimed that they were members of a ‘Right Sector’ terrorist organization planning a series of terrorist attacks in Crimea.

Both Sentsov and Kolchenko maintained their innocence from the outset and, particularly Sentsov, repeated allegations of torture.  Afanasyev and Chirniy ‘confessed’ and agreed to ‘cooperate’ with the investigators, and both received minimum 7-year sentences in separate trials.

There was enormously secrecy about the case with Sentsov and Kolchenko’s lawyers forced to sign agreements not to divulge any information. It became clear from the first day of the trial on July 20 that the only ‘evidence’ in the case was the testimony provided by Chirniy and Afanasyev.

Gennady Afanasyev was under enormous pressure, which included threats of retaliation against his mother, to maintain the FSB lie.  He showed great courage, and is now in danger, for refusing to do so  (see the moving exchange between Afanasyev and Sentsov in court on July 31).

Please write to all the men, and put pressure on your governments to make it clear to Russia that it is in breach of the Minsk Agreement and international law by holding the men prisoner

Details of how to write (especially to Oleksandr Kolchenko who turns 26 on Nov 26) can be found here:   Russia’s Ideologically Motivated State Terror and Its Ukrainian Victims