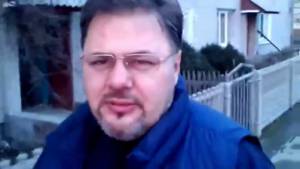 Amnesty International has named Ukrainian freelance journalist and blogger Ruslan Kotsaba a prisoner of conscience in its latest report, released on Feb 24.  The  NGO’s coverage of events in Donbas and Crimea can be disputed, but its assessment of Kotsaba’s ongoing imprisonment seems depressingly fair.

Kotsaba was arrested on Feb 7, 2015 and has been in detention ever since.  His lawyer, Tetyana Montyan, announced in November 2015 that she was preparing an application to the European Court of Human Rights since she believed the authorities were deliberately dragging out the trial with hearings up to a month apart.  According to human rights activist Volodymyr Yavorsky, most of the ’witnesses’ called so far did not actually know Kotsaba and are really only explaining why they disapprove of his actions.

If the Ivano-Frankivsk blogger’s public pronouncements are highly contentious, so too are the charges against him. The indictment became known on March 30, and dashed any hopes that there really were proper grounds for holding the blogger in custody.  He is charged with State treason (Article 111 § 1 of Ukraine’s Criminal Code) and under Article 114-1 § 1.  The latter article covers espionage, although in this case, he is accused of obstructing the lawful activities of the Armed Forces and other military formations.

The charges are based solely on a video in which he opposed the mobilization drive in Ukraine, on his cooperation with Russian pro-Kremlin media and, effectively, on his expression of his views.  While many Ukrainians would vehemently disagree with Kotsaba’s views and condemn his collaboration with Russian media engaging in propaganda, not journalism, none of this warrants criminal charges.  There need to be serious grounds for accusing a person of state treason, a charge carrying a sentence of 12-15 years imprisonment.  There appear to be none.

The video had, in fact, been seen by a very modest number of people until the SBU made its author well-known.  It has now been viewed nearly 424 thousand times.   There is certainly no evidence that it had any impact on the level of mobilization, yet the prosecution is claiming that it falls under Article 14 as being ‘subversive activities obstructing the armed forces”.

It should also be noted that there are plenty of Ukrainians who do not dispute that Russia is the real aggressor but who believe the mobilization waves to be legally questionable given that Ukraine has not formally declared a state of war.

Kotsaba’s willingness to collaborate, whether for remuneration or for free, with Russian channels whose warmongering propaganda and distortion of the facts have finally led western countries to agree to countermeasures, may be viewed by many of us as reprehensible. That does not make them state treason.

The dismissal has just been announced of Maria Stolyarova*  who as chief editor of a news program on TV Inter made a shockingly offensive reference to Nebesna Sotnya or ‘Heavenly Hundred’, the anniversary of whose killings was being honoured on the second anniversary of the bloodiest carnage.  Journalists who probed Stolyarova’s Facebook page came up with other material indicating that the journalist, a Russian national, had in 2014 even called for Russia to bring troops into Donbas.

Public opinion regarding Stolyarova’s outrageous reference to Maidan victims would have probably forced a television company in any country to ask the person to resign.

It would not prompt the kind of criminal charges that have been laid against Kotsaba over equally offensive, but not criminal, pronouncements.

*   Since the above text was written, Ukraine’s Security Service has deported Stolyarova.