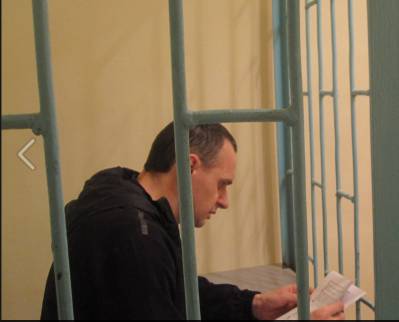 Crimean filmmaker and political prisoner Oleg Sentsov has been moved unexpectedly from the Chelyabinsk SIZO or remand prison where he had been held for over a week.  Tatyana Shchur, a local human rights activist, says that such moves do not usually take place at the weekend, and wonders if the haste and secrecy was in connection with Nadiya Savchenko’s dry hunger strike and international attention on her imprisonment and that of Russia’s other Ukrainian prisoners.

It is also galling that Sentsov has been moved since he was still getting over a bad cough caused by being held in damp and overcrowded basement cells in both Samara and Chelyabinsk.  His conditions improved after local human rights activists learned of his arrival, and until his sudden disappearance over the weekend, he had been in a warm and dry cell with only one other person.  He had also been visited by the local human rights ombudsperson, Margarita Pavlova.

The human rights activists had even – “as a prophylactic measure” – added Sentsov’s name to their ‘Safety Register’.  This is a list of people who have complained about the administration to members of the public supervisory commissions.  One of the commission’s members Tatyana Shchur explains that any complaints immediately put a prisoner in danger of retaliation, and the register means that the person is kept under particularly close surveillance as a precautionary measure.

The Russian authorities have now removed the possibility of surveillance, and done it without any prior announcement.  Tatyana Shchur reports that she learned of his move through a text message from an unknown telephone, saying only that Oleg Sentsov had been moved.

It certainly does appear that Moscow is trying to isolate Ukrainian political prisoners.  Sentsov was initially going to be sent to Siberia, now the destination is Yakutia in the Far East.  Few journalists are likely to travel there, and even Sentsov’s lawyers will have difficulty visiting..

Gennady Afanasyev has been in a maximum security prison in the far northern republic of Komi since shortly after his courageous retraction of all testimony against Sentsov on July 31, 2015, and is being held in particularly harsh conditions. 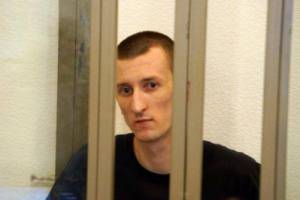 Oleksandr Kolchenko, the Crimean civic activist sentenced to 10 years in the same politically motivated trial as Sentsov, is to be held in a Chelyabinsk region prison.  Concern here is aroused not only by the distance from his family and lawyer, but also by the dire reputation of Prison Colony No. 6 in Kopeisk.

The conditions in the prison colony to which Kolchenko has been sent became widely known after a rebellion in November 2012.  Kommersant Newspaper wrote at the time about how 500 prisoners had held a totally peaceful strike, with some of them climbing on the roof with a sign reading “People, help!”, “the prison administration is extorting $” and “They torture and humiliate”.  Prisoners and their relatives talk of merciless extortion and exploitation from prison staff.

The authorities reacted by sending in special units and OMON riot police.  Relatives and friends of the prisoners were told that ‘planned exercises’ were underway, however the prisoners yelled out to not disperse “or they’ll kill us”.  There was confrontation between the people outside and the authorities, with dogs set on them and violence, resulting in one woman ending up in hospital with a broken arm, and a pregnant woman miscarrying.

It seems that the actual prisoners’ rebellion ended, through the intervention of human rights activists, without violence.  There was another rebellion in November 2014, when 11 prisoners slashed their veins in protest at treatment of another prisoner during a search undertaken by a penitentiary service ‘special unit’ (these are often carried out with violence against prisoners).

The prison colony is supposed to be for prisoners serving sentences for serious and extremely serious crimes.  According to Kommersant, half were there for murder.  Most are very young.

And now there is Oleksandr Kolchenko, sentenced to 10 years effectively because of his opposition to Russia’s invasion and occupation of his native Crimea.

Sentsov, Kolchenko, Gennady Afanasyev and Oleksy Chirniy are all Crimeans who opposed Russia’s invasion and annexation of Crimea.  They were all arrested in May 2014, and held incommunicado for weeks before being taken to Russia.  There, on May 30,  the FSB or Russian Security Service claimed that they had been involved in a ‘Right Sector terrorist plot’.  There was nothing to indicate any presence of the ultra-nationalist Right Sector in Crimea, and the notion in particular that Kolchenko, a left-wing anarchist would be part of a far-right movement’s ‘plot’ was ludicrous.

There was almost total secrecy about the charges against them, and it was only with the trial that it became clear that there was absolutely nothing to warrant the charges of ‘terrorism’.  There was nothing against Sentsov at all, only testimony given by Afanasyev and Chirniy while held incommunicado, without lawyers and under the total control of the FSB.  The court ignored the lack of any evidence and Afanasyev’s clear statement that any testimony had been tortured out of him, and sentenced Oleg Sentsov to 20 years.

We do not have addresses yet for Oleg Sentsov and Oleksy Chirniy, but you can send your letters to post.rozuznik[at]gmail.com, a civic initiative helping to get mail to Russian-held political prisoners  They will deal with writing the envelope and sending it on.  Just cut and paste the names as given below (the year of birth after their name is required by the prison service),   You can do the same for Oleksandr Kolchenko and Gennady Afanasyev, if you prefer, but there are up-to-date addresses.