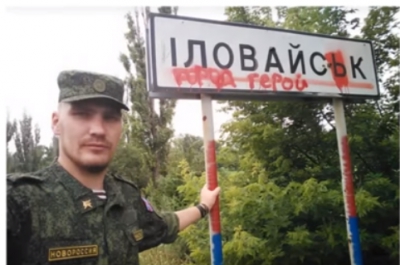 Can apparent evidence of Russian war crimes in Donbas be protected as ‘confidential’ material?  The InformNapalm project, which probes Russia’s undeclared war against Ukraine, believes not, and has responded accordingly to the demand from YouTube to remove a particular video.

It is unclear as yet how YouTube will respond, but for the moment the video, posted by InformNapalm, remains available here even though the 48 hour deadline has passed.

An anonymous group of hackers known as #FF [Falcon’s Flame] revealed information which they obtained from the telephone of a person who appears to be an employee of Russia’s Penitentiary Service [FSIN]. 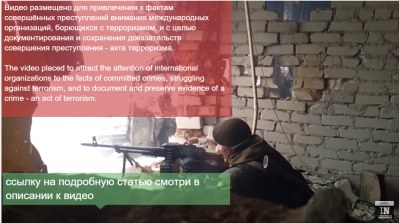 This is not the first time that Russian officials have exposed Russia’s military engagement through their insistence on taking ‘selfies’.  The mobile photos contain full EXIF data, including the date that the photo was taken.  According to InformNapalm, the hackers also provided a video which they say was shot by a spetsnaz officer from the FSIN MANGUST unit for the Rostov oblast.  He is alleged to have come several times to Donbas as part of his work and taken part in the fighting.

There are a very large number of pictures of the man – Nikolai Reikhenau – on the video.  If the material and documentation are authentic, this is damning proof of his and Russia’s engagement in Donbas, something Russia is continuing to deny.

It would doubtless be up to the International Criminal Court in the Hague to decide whether the material constituted sufficient evidence.  What is clear is the stated reason given to YouTube to justify the demand for the video’s removal.  The complaint is not that the material is false, distorted or defamatory, but that it reveals “confidential information”.

The letter from the Youtube support team explains that they have received a complaint about the video’s “violation of confidentiality” virtually throughout the video.  If they do not remove the problem within 48 hours, YouTube will itself look into the complaint.  The use of a person’s full name is clearly viewed as a breach of their privacy.

They challenge the complaint, pointing out that the video is about a Russian FSIN spetsnaz officer present on work trips in eastern Ukraine,   carrying out criminal orders.  The material on the video, with the data regarding time and place, could well end up before the International Criminal Court.  The video shows: the man illegally crossing into Ukraine; taking part in illegal military formations; carrying out military and terrorist action.  They point also to proof of mercenary and other illegal activities which the individual is implicated in.

Ukrainian law, they stress, allows the videoing of criminal offences, and all of the above-listed activities are in breach of Ukrainian and international law.  Under such circumstances, even if the person had not himself revealed such involvement on social networks, his right to ‘confidentiality’ must be in dispute.  Ukraine’s Law on Access to Public Information makes it quite clear that information of direct relevance to national security cannot be classified as ‘confidential’.  ‘InformNapalm also cite anti-terrorism laws in both Ukraine and the United Kingdom and US Supreme Court rulings.  The latter, they point out, have allowed video fixation and publication of data about offences and the offender.

InformNapalm cites a Parliamentary Assembly of the Council of Europe Resolution from June 25, 2015 which specifically refers to the “beginning of the Russian aggression in Ukraine, in early 2014”.

This same resolution “deplores” Russian President Vladimir Putin’s decree classifying as state secret information on Russian military casualties during “special operations” in peacetime.  No explanation is provided as to what such ‘special operations’ are, however nobody seriously believes that the decree was not aimed at concealing soldiers’ deaths fighting Russia’s dirty war in Ukraine.

Russia has used all kinds of means to conceal its military engagement in Donbas.  This has made the work of cyber watchdogs like Bellingcat and InformNapalm, so vital.  The use of material obtained from hackers may certainly present legal issues, but so too would helping Russia conceal material that could one day be used as evidence of war crimes charges by claiming it to be ’confidential’.  .