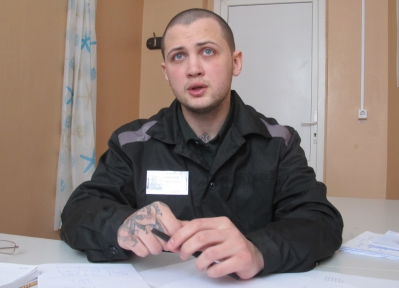 A Russian court in the far northern Komi Republic has accepted that holding Gennady Afanasyev in a prison 2, 700 kilometres from his family violates his rights under the European Convention. . This unexpectedly positive move comes as fellow Crimean political prisoners Oleg Sentsov and Oleksandr Kolchenko are being moved as far east as Moscow can send them.   All three men, together with Oleksy Chirniy, opposed Russia’s invasion and annexation of Crimea.  They were all arrested in May 2014 and received long sentences on trumped-up charges in a case condemned by Russian human rights activists and the international community as politically motivated.

Whether or not Afanasyev is moved to a prison closer to his home remains to be seen since the ruling can, and most likely will, be challenged.  It is certainly cheering that at least one judge in Afanasyev’s case has issued a just ruling, based on the European Convention of Human Rights.  The judge, A. Smirnov, points out that Afanasyev’s sentence imposes unwarranted obstacles to receiving the visits from his mother he is entitled to (6 per year under normal conditions).  It effectively creates additional difficulties for adaptation and reform and does not therefore serve the purposes of criminal sentences”.

Gennady Afanasyev’s application dates back to January 2016.  At a court hearing on Jan 12, the Syktykvar City Court ordered the Russian penitentiary service to explain why Afanasyev had been moved 2700 kilometres from his home.  The penitentiary service official was rather lost for an explanation, and couldn’t come up with anything better than that there had been a place free in the Komi Republic.

The official’s reticence in giving the real reason can probably be understood.  The change in Afanasyev’s prison is directly connected with the 25-year-old’s courageous appearance at the trial of Oleg Sentsov and Oleksandr Kolchenko on August 31, 2015.

Afanasyev had originally ‘confessed’ to all charges presented and had given testimony against himself and Sentsov. He had never had a lawyer not appointed by the investigators, and had been sentenced at an effectively secret court hearing in Dec 2014 to 7 years imprisonment.  This is the minimum sentence which both he and the fourth person arrested, Oleksy Chirniy received for ‘cooperating’ with the investigators.

There was absolutely no other evidence against Sentsov, and none of ‘terrorism’ against Kolchenko, and the charges against the two were built entirely on this testimony.  Chirniy had earlier complained to the Ukrainian consul of torture, but did not speak out at the trial, only refusing, as the FSB had instructed, to give testimony in court (to avoid questioning).

Afanasyev had received the same instructions – and threats if he didn’t comply – from the FSB.  He however stood up and stated that he did not know Sentsov, and that he retracted all of his testimony which had been given under torture.

He was immediately placed under huge pressure to back down, with the FSB on one occasion using physical violence, and threatening to send him to the back of beyond, and that something bad could happen to his mother.

In recognizing him as a political prisoner, the renowned Memorial Human Rights Centre warned that Afanasyev was in danger of reprisals because of his action (see their assessment of the charges against him).   Alexander Popkov, the first lawyer Afanasyev had ever had access to, after July 31, called him “FSB’s Enemy No. 1” for his courage.

He has since paid for it, and not only in being sent to the Komi Republic.  He was also subjected to numerous penalties on trumped up pretexts, and then in February 2016, was moved to a ‘prison-type cell’, one of the worst forms of punishment in the Russian prison system.  He had even had paper confiscated, and his mother was asking people who wrote to him, to attach paper, envelopes and stamps so that he could reply (more details here).

His mother has only been able to visit him once with a gruelling journey taking many days.

In another worryingly lawless development, Afanasyev was refused permission to see the Ukrainian consul.  The argument given was that he is a Russian national.  None of the men is Russian, and any attempts to foist citizenship on them is against their will and international law.

Hello, I wish you good health, courage and patience and hope that you will soon be released.  You are not forgotten.  [The last word is like ‘hang in there’).

We only have an address for Oleksandr Kolchenko at the moment, since Gennady will hopefully be moved soon.  Please send your letters to post.rozuznik[at]gmail.com, a civic initiative helping to get mail to Russian-held political prisoners  They will deal with writing the envelope and sending it on.  Just cut and paste the names as given below (the year of birth after their name is required by the prison service),   You can do the same for Oleksandr or use the address given.