Crimean political prisoner told ’extremism’ is not liking the regime 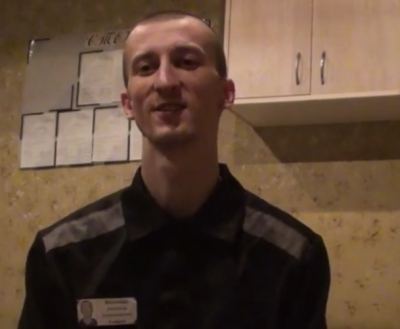 Crimean civic activist Oleksandr Kolchenko has been placed on the Russian prison ‘prophylactic register’ as a person “with a tendency for circulating extremist ideology”.  Kolchenko asked the prison officials for an explanation but was simply read some excerpts from the Russian Criminal Code.  Asked again for an explanation, the officials suggested that it might be showing dissatisfaction with the regime.  Kolchenko asked if going to the polling station and voting for an opposition candidate is also ‘extremism’, but the officials were unable to answer  (see the video).

Together with Crimean filmmaker Oleg Sentsov and  Gennady Afanasyev, Kolchenko has been recognized by the Memorial Human Rights Centre as a political prisoner.  Memorial rejected all charges related to ‘terrorism’ as politically motivated and entirely unproven.

The political nature of this case and the predetermined convictions were clear from the outset.  The four opponents of Russia’s annexation of Crimea - Sentsov, Kolchenko, Afanasyev and Oleksy Chirniy - arrested in May 2014 had, by October that year, been added to Russia’s huge ‘List of Terrorists and Extremists’ although not one of them had yet been convicted.

Fortunately, Kolchenko has also been added to a human rights activists’ Safety Register.  This ensures that the authorities know they are being watched in the case of prisoners who could face reprisals.  Local rights activist Tatyana Shchur had already reported adding Sentsov to the register while he was held in transit in a Chelyabinsk remand prison.  Sentsov is still on the gruelling journey to a prison in the far eastern Yakutia region.

It is evident from the account Kolchenko gives and the records shown the rights activists (whose commission is entitled to visit prisoners) that the officials have been fabricating ‘reprimands’ on the basis of which Kolchenko has already faced one period in a punishment cell.  One of these reprimands was for not greeting the official in the established fashion.

Although a court in the far northern Komi Republic has found that the Russian authorities are violating Afanasyev’s rights by holding him in a prison 2700 kilometres from his home, Kolchenko and Sentsov have also been sent huge distances away from their families, lawyers and the media as Russia.

Oleg Sentsov, Oleksandr Kolchenko, Gennady Afanasyev and Oleksy Chirniy are all Crimeans who had made no secret of their opposition to Russia’s invasion and occupation of Crimea.  They were all arrested in May 2014, and held incommunicado for weeks before being taken to Russia, when on May 30 the FSB or Russian Security Service claimed that they had been involved in a ‘Right Sector terrorist plot’.  There was nothing to indicate any presence of the ultra-nationalist Right Sector in Crimea, and the idea that Kolchenko, who is a committed left-wing anarchist would have taken part in a far-right movement’s ‘plot’ was absurd.

Please write to all four men.  It is clear from their replies that the letters are an enormous boost for them and also demonstrate to the Russian authorities that the men are not forgotten, and that they are under scrutiny.

You can only send normal letters which must not weigh more than 100 grams.  It would be very good if you can add paper and an envelope.

Even in Kolchenko’s case, and with the other three men you can send your letters to post.rozuznik[at]gmail.com, a civic initiative helping to get mail to Russian-held political prisoners  They will deal with writing the envelope and sending it on.  Just cut and paste the names as given below (the year of birth after their name is required by the prison service),