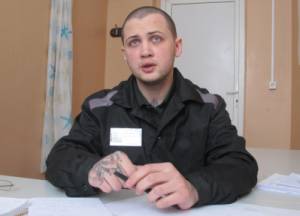 Russia is still trying to force its citizenship on Gennady Afanasyev, one of the four opponents of Crimean annexation taken illegally to Russia and convicted of ‘terrorism’,  and may also be putting similar pressure on Oleksandr Kolchenko.

These efforts are continuing despite the extradition procedure having apparently been initiated, and are of particular concern in Afanasyev’s case.  If the release of Sentsov and Kolchenko is regularly demanded by western countries, Afanasyev is never specifically named, but simply understood as being one of the other “Ukrainians illegally held”.   Afanasyev is also a recognized political prisoner, is in specific danger and in need of international attention.

His lawyer Alexander Popkov has called Afanasyev the Russian FSB’s ‘enemy No. 1’ because of his courage in standing up at the trial of Sentsov and Kolchenko and admitting that all previously given testimony was extracted under torture and false.

He has certainly paid for his courage.  He has been sent to an extremely harsh prison in the Republic of Komi, 2700 kilometres from his native Crimea where he faces constantly penalties on trumped-up charges.  Although a Komi court even acknowledged that it was in breach of the European Convention on Human Rights to hold Afanasyev so far from his home, nothing has thus far come of this.  It seems unlikely that it will, with Sentsov and Kolchenko also having been sent as far from their homes, Moscow and the media as possible.

Ukraine has asked for the extradition of all three men, and 73-year-old Yury Soloshenko.  It seemed an extremely positive sign that the outgoing Russian human rights ombudsperson Ella Panfilova recently acknowledged that Sentsov and Kolchenko are Ukrainian nationals.  Given the pressure Afanasyev is facing, it is just as ominous that his name was not mentioned. 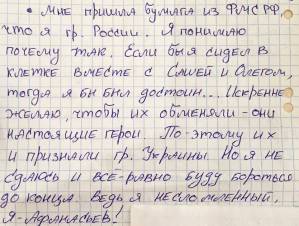 Olha Afanasyeva, Gennady’s mother has just received a letter, dated 4 April, in which her son writes that he has received a document from the Russian migration service claiming that he is a Russian citizen.  He hopes that Sentsov and Kolchenko will be exchanged, calling them heroes, and adds that he will continue to fight to the bitter end, and will not be broken.

As reported here, he recently tried to go on hunger strike in protest but was persuaded that it would make more sense to issue a statement.  This can be heard here  He states:

“I am a Ukrainian citizen and all attempts to foist Russian citizenship upon me are against my will.”

The pressure could be part of the general reprisals against the young man, however Alexander Popkov does believe that there is a real danger that Afanasyev could have citizenship foisted against his will, thus preventing extradition and stripping him of fundamental rights. Popkov points out that this has been going on for a long time, that the Ukrainian consul has been prevented from seeing him and he has been refused an interpreter.

It remains unclear how genuine the ‘extradition procedure’ really is, and it could at present simply be a delaying tactic, with the collecting of documents alone taking a few months.  There had certainly appeared to be some movement  In an ‘interview’ given via local human rights activists, Kolchenko mentions attempts to foist a Russian passport on him, but is also aware of some kind of new developments.  He clearly believes that they may be exchanged with this made to appear like an extradition process.  Hope was raised in recent days by the announcement that Russia’s Justice Ministry has asked for the extradition of 6 Russian nationals, of whom those named appear linked with the conflict in Donbas.

Everybody understands that this is a political decision which will be made in the Kremlin. If ‘extradition’ is to be used, rather than an open exchange, so be it, as long as nobody seriously suggests that the Ukrainians should serve politically motivated sentences in Ukraine.