Selective prosecutions as weapon in Prosecutor’s war against reform?Prosecutor General Office stages evening raid to bring charges against anti-corruption reformerFighting Corruption in Ukraine or Those Who Fight It?Key reformer quits over ’total corruption’ & ’lawlessness’ in Prosecutor General’s OfficeProsecutor General Shokin’s Year of Failed Investigations and Blocked ReformHow Ukraine’s Prosecutor General Sabotaged the Reform ProcessForget Fighting Corruption. Ukraine’s Prosecutor General Sabotages Crucial ReformFive years of the penitentiary medicine reform: a sad anniversaryUS imposes sanctions on former Yanukovych aide Andriy Portnov for corrupting Ukraine’s courts The main threat is in ourselvesRussia imposes prison sentences for donating to ‘undesirable NGOs" and adds Bard College to its blacklist Prisoners’ rights to health protection and medical care in 2014-2021: KHPG reportPrisoners’ rights in Ukraine 2014-2021: KHPG reportFirst Berkut police jailed for involvement in savage dispersal of Maidan activists The Bill on SBU is unacceptable, it should be buried Appeal of human rights organizations to the UN Special Rapporteur on Combating Torture regarding the shameful response of the Government of Ukraine to the CPT report on the results of the ad hoc visit in August 2020Ukraine’s most malicious miscarriages of justiceProtests throughout Ukraine following 7-year sentence against civic activist Serhiy SternenkoWhat is wrong with the bill on SBU?2020: There was no worse year in the realm of human rights after the Revolution of Dignity
• Topics / Law enforcement agencies 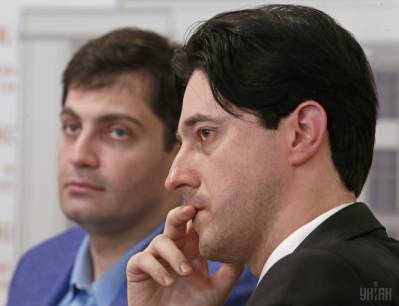 The National Anti-Corruption Bureau did not initiate criminal proceedings over flats obtained by Vitaly Kasko, a prominent reformer, anti-corruption campaigner and ex-Deputy Prosecutor General.  This contradicts the impression given by the Prosecutor General’s Office which is seeking prosecution of Kasko, while claiming that data about the allocation of almost all other apartments has been ‘lost’.

In an interview to Liga.net, Artem Sytnik, head of the NAB, was asked whether the prosecution of Kasko should be considered political persecution.  He stressed that he has no right to comment on political issues, and could only say that in the part of the case which had been passed to the NAB regarding the supposedly illegally obtained apartments, the NAB had found nothing criminal.  “If the Prosecutor General’s Office thinks differently, then they are probably guided not only by legal considerations.”

The Prosecutor General’s Office reacted negatively and LB.ua later reported that the NAB’s press service had issued ‘clarification’.  They pointed out that Sytnik had in fact said that they had “not found elements of any crime falling under the jurisdiction of the NAB”.

This is indeed rather different, however there was no retraction of Sytnik’s suggestion of ‘other considerations.’ As reported here, strong concern about the Prosecutor General’s Office’s motives has been expressed by, among others, the Advocacy Advisory Panel, a civic initiative of Euromaidan victims’ lawyers, whose statement is translated here, Khatia Dekanoidze, Head of Ukraine’s National Police and Legal Aid Coordination Centre.

The Advocacy Advisory Panel directly suggested that the Prosecutor General’s Office is using selective prosecutions as a form of political persecution and to discredit those seeking reform of the prosecutor’s office.

It is possible that the implication that the NAB had passed on a case requiring further action was simply the fault of sloppy reporting.  Certainly the suggestion that the NAB, a body independent of the Prosecutor General’s Office, had found grounds for prosecution would have given the accusations greater weight than was warranted.

In fact, on Jan 20 a Kyiv court allowed a legal suit brought by MP Ihor Lutsenko obliging the NAB to register an investigation into the alleged illegal privatization of two apartments and a plot of land by Kasko.  A criminal investigation was initiated on Feb 12 by the Prosecutor General’s Office under Article 190 § 4 and 358 § 4 of the Criminal Code (receiving the right to a former Prosecutor General’s Office flat through deceit and abuse of trust.  This was three days before Kasko resigned from his post as Deputy Prosecutor General saying that he did not wish to be part of a body where “total lawlessness is tolerated”.  Together with David Sakvarelidze, whom former Prosecutor General Viktor Shokin dismissed hours before his own removal, Kasko was viewed as a key reformer and his resignation was widely regretted and only fuelled calls for Shokin’s removal.

In an earlier blog,  Kasko pointed out that he had undergone a lustration check in 2015 which included a check on whether property had been lawfully obtained. Kasko has also put forward his explanation of the flat allocations.  He says that during a first period when invited to work for the PGO in 2002, he was allocated a flat sized 19 square metres for himself and his mother.  This was later privatized by his mother. The second time he returned in 2007 and in 2008 the PGO organized allocation of a three-room flat.  He asserts that this was the first and only official apartment that he ever received, and that he gave correct information about the size of his family etc.

A PGO attempt earlier in April to get Kasko remanded in custody was unsuccessful, with Oleh Bilotserkivets from the Pechersk District Court in Kyiv finding no grounds to either remand Kasko in custody or to impose bail.  Kasko was ordered to give a personal undertaking not to leave the city, which his defence lawyer has said that they will appeal.

As the Advocacy Advisory Panel suggests, a probe into the allocation of prosecutor’s office flats would almost certainly uncover a large number of such cases.

The Prosecutor General’s Office denied any selective approach and on April 20 claimed that it was investigating other cases as well.

This in turn contradicts an answer provided to investigative journalists from Glavkom on Feb 19, 2016.  They were informed in a letter published here that a database on allocation of official flats by staff of the PGO had been stolen.  There was supposedly no data for several years and only partial information for others.

The Glavkom journalists had sought this information after the initial mention of allegations against Kasko at the end of 2015.  Then, during the competition for the head of the Specialized Anticorruption Prosecutor’s Office, First Deputy Prosecutor General (now acting PG) Yury Sevruk who was a member of the selection commission made public allegations about the flats.  Kasko was one of the leading contenders for the post, and although the information was denied by Kasko and in no way proven, it certainly prevented his appointment.

Glavkom noted that those accusations had been the culmination of an internal conflict in the Prosecutor General’s Office arising after the ‘diamond prosecutors’ affair’ -   two high-ranking prosecutors - Volodymyr Shapakin and Shokin’s personal friend Oleksandr Korniyets who are suspected of major corruption.  Glavkom states that those around Shokin had tried to muffle the case and put pressure on the initiators of the investigation – David Sakvarelidze and Vitaly Kasko.

In the Liga.net interview, Sytnik stated that the problems within the Prosecutor General’s Office go beyond what simple reform can mend.  Everything needs to be radically changed.  For that reason, he sees little chance of any constructive improvements in the near future.  There is zero public trust in the body, he says, and zero may be an optimistic assessment.