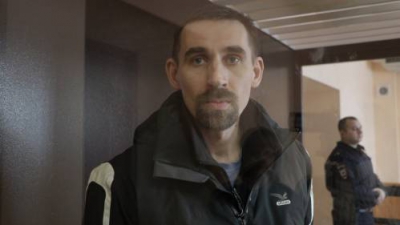 If the truth about the Soviet Union once resulted in imprisonment for ‘anti-Soviet propaganda’, just reposting an article entitled ‘Crimea is Ukraine’ can now result in a prison sentence for so-called ‘public calls to separatism’.  You’ll also end up on Russia’s ‘List of extremists and terrorists’, with any bank accounts frozen, well before a court ruling.

Andrei Bubeyev, a mechanical engineer from Tver, has become the latest blogger to be jailed for material on his personal VKontakte page critical of the current regime and especially Russia’s aggression against Ukraine and annexation of Crimea.  A Tver court on Thursday, May 5, found him guilty on two counts and sentenced him to 2 years in a minimum security prison-colony and prohibited him from using the Internet for a year.

According to his lawyer Svetlana Sidorkina, Bubeyev was charged over two pieces of material he reposted on VKontakte.   The first was a poster by Anton Myrzin, otherwise known as Paperdaemon Chaognostic called “Squeeze Russia out of yourself”.  The phrase hearkens back to a letter from Anton Chekhov to a friend in which he spoke of needing “to squeeze the slave out of us, drop by drop”.  Here it is Russia that needs to be squeezed out – in the poster from a toothpaste tube. 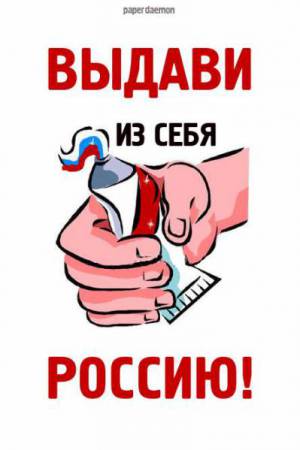 This was deemed by the Russian investigators and court to constitute ‘public calls to extremism via the Internet’ (Article 280 § 2).

He was also charged with reposting an article by Boris Stomakhin entitled ‘Crimea is Ukraine’.   The article would certainly annoy the current regime under President Vladimir Putin.  Stomakhin considers Russia’s invasion and annexation of Crimea to have been the final straw, the border dividing this world from that, good from evil.  He says that Russians should paint the word “Russian occupiers out of Crimea!” and “Russian swine, return Crimea to Ukraine!” on every wall in every Russian city”.

Stomakhin is now himself serving a politically motivated prison sentence, and Bubeyev, who simply reposted the article has been convicted of ‘public calls to separatism via the Internet’ under Article 280.1 § 2).

Article 280.1 was added to Russia’s criminal code in May 2014, with fears expressed from the outset that it would be used to crush criticism over the invasion and annexation.  The first conviction and three-year sentence in Sept. 2015 was against Russian Tatar activist Rafis Kashapov for posts on VKontakte criticizing annexation and Putin’s regime.  (more details here).

The sentence has just been upheld of 35-year-old Vadim Tyumentsev from Tomsk (in Siberia) who was sentenced to 5 years in December 2015 over calls to peaceful protest and critical comments on the Internet regarding Russian military aggression in Ukraine and pro-Russian separatists.   Tyumentsov, who has been in detention since 28 April this year, was declared a political prisoner by the renowned Memorial Human Rights Centre in November.

Kashapov, Polyudova and Tyumentsev have all been recognized by the Memorial Human Rights Centre as political prisoners. They were all placed on the ‘list of extremists and terrorists’ before the court trial, as were other critics of annexation and Russian aggression against Ukraine, like poet Alexander Byvshev and Yekaterina Vologzheninova, who were convicted under the notorious ‘extremism’ articles but not jailed.

At Bubeyev’s trial, the prosecutor had sought a 3.5 year sentence.  The judge sentenced him to 1.5 years on each, but allowed partial concurrent serving of the sentence.  This however means that the sentence is final.  Thus far, courts have not once overturned politically motivated sentences at appeal stage, though they do sometimes reduce them.

This is Bubeyev’s second prosecution, with the first, initiated at the beginning of 2015, also over material about Russian aggression in Ukraine.   These bloggers are increasingly jailed, while Putin reappoints his protégé Ramzan Kadyrov as leader of Chechnya after the latter openly posted a photo with a sniper aiming at Russian opposition leader Mikhail Kasyanov and threatened reprisals against opposition to the Kremlin.  Alexander Dugin, fascist leader with friends in very high Russian quarters, politician Vladimir Zhirinovsky with his threats against all of Europe do not fall under Russia’s highly specific understanding of ‘extremism’.