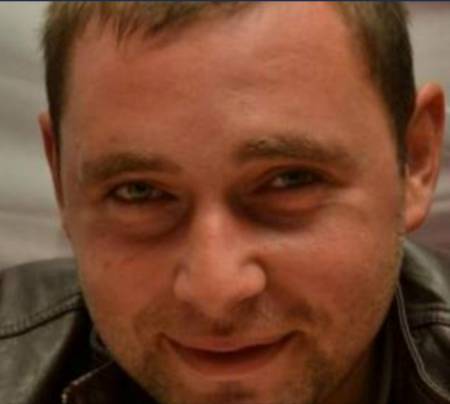 Scroll down for details on how to send, share and tweet Birthday Greetings to Crimean Tatar Political Prisoner Mustafa #Degermendzhy!

Crimean Tatar political prisoner Mustafa Degermendzhy turns 27 on May 22.  It is his second birthday in custody in Russian-occupied Crimea facing absurd charges linked with a pre-annexation demonstration over which Russia has no jurisdiction.

Mustafa was arrested on May 7, 2015.  He has been in custody ever since although he has been repeatedly offered freedom and, eventually a suspended sentence, in exchange for false testimony against Crimean Tatar leader Akhtem Chiygoz.  His answer has remained the same throughout: “I have no intention of betraying anybody”.   Although his parents and sister obviously want Mustafa home, Bekir Degermendzhy himself says that his son was not brought up to have behaved any differently.

Chiygoz, Degermendzhy, Ali Asanov and three other Crimean Tatars were among the roughly 10 thousand Crimean Tatars and other Ukrainians who gathered outside the Crimean Parliament on Feb 26, 2014.  There were strong grounds for believing that pro-Russian forces with Russian FSB backing were planning to try to force through legislation to change Crimea’s status and they wanted to stop this illegal plan.  Sergei Aksyonov, who was installed in power by armed Russian soldiers the following day, organized a counter-demonstration, attended by a couple of thousand pro-Russian supporters.  The demonstration almost certainly stopped Russia’s plan of achieving effective annexation without open invasion.  Russian soldiers seized control in Simferopol early the next morning.

Almost a year later, the demonstration which had taken place on Ukrainian territory and under Ukrainian law was used as a pretext for the arrest under Russian law in Russian-occupied Crimea of Akhtem Chiygoz, Deputy Head of the Crimean Tatar Mejlis [representative assembly].  Armed searches and arrests of Asanov, Degermendzhy and others followed.

Only Crimean Tatars were targeted.

All are Ukrainian nationals whose prosecution for alleged offences in Ukraine is even illegal according to Russia’s Criminal Code (Article 12 § 3). 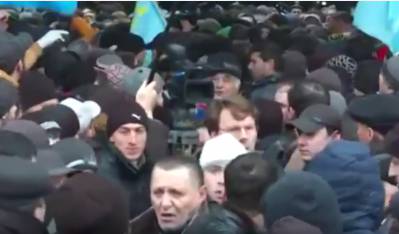 Chiygoz was charged with ‘organizing mass riots’ and could face a 15-year sentence.  Degermendzhy and others are accusing of ‘taking part in mass riots’, with this carrying a sentence of from 2 to 8 years.  The cynicism in Degermendzhy’s case is accentuated by the fact that video footage (around 3.15 here https://youtube.com/watch?v=brYjd2Paks0 ) clearly shows Mustafa Degermendzhy early on helping his father, who has severe asthma and was in obvious distress, to leave the demonstration.  His father needed medical assistance and Mustafa did not leave him.

The lawlessness is unrelenting and there are now fears that Russia’s extraordinary banning of the Mejlis may result in new backdated charges being brought since the demonstration was organized by the Mejlis.  It was, incidentally, thanks to the Mejlis leaders, including Chiygoz, that the huge demonstration passed relatively peacefully.

Degermendzhy has tried to no avail to find out what it is exactly that he is charged with. During the court hearing on Jan 25, for example, he stated:

Mavile Degermendzhy, Mustafa’s younger sister, told the Internet site 15Minutes that her family are enormously grateful to the many people who show their solidarity by coming to the court.  They have become like members of their family.

She and her father are only able to see Mustafa during court hearings, however her mother has civic defender status and is able to visit him in this capacity about once a week.  They are unable to say anything about the conditions Mustafa is held in, but know that however bad, he would never complain, and would not want to worry them.

In all these cases, the prosecutor has claimed that the men must be held in prison since they are Ukrainian nationals and could ‘abscond’.  The mere suggestion of this is insulting and has been repeatedly rejected.  Mavile recalls that during one of the detention hearings, he was given the chance to speak.  He said that he had nothing to add to what the lawyer said, but would stress that his family is very important to him and he would never leave Crimea.

Mavile says that she is proud of Mustafa, of Akhtem Chiygoz and Ali Asanov “for that unbroken spirit, let’s say, for being the way they are, that they refuse to give in and to betray their principles.

Mustafa Degermendzhy, Akhtem Chiygoz and Ali Asanov have all been declared political prisoners by the renowned Memorial Human Rights Centre.

They are facing real, and probably long, prison sentences on monstrously lawless charges.  Please help to bring their case to the attention of politicians and NGOs in your country.

Any letters need to be in Russian and avoid politics or anything that could get him into trouble.  If this is difficult, then the following would be fine.

[Happy Birthday Mustafa!  You are not forgotten and we hope you will soon be freed.  The last word is a friendly expression like ‘hang in there’.]

You can send letters to the Representative Office of the Mejlis of the Crimean Tatar people in Kyiv (01014, Київ, вул. Сєдовців, 22/14, Ukraine, Kyiv), adding Mustafa’s name  ДЕГЕРМЕНДЖИ Мустафе 1989 г.р.

OR by email to [email protected]  This is the address of a civic initiative who send letters to political prisoners in Russia and Russian-occupied Crimea.

Please also use the same addresses to write to Akhtem Chiygoz and Ali Asanov.  Show them, and the Kremlin, that they are not forgotten!