“When We Return”: Poignant Affirmation on Crimean Tatar Flag Day 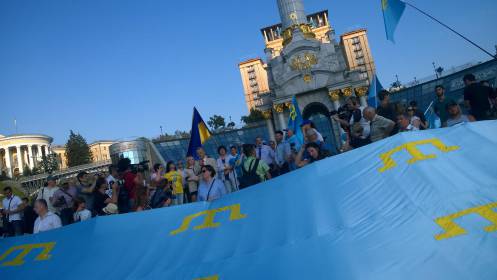 The largest Crimean Tatar Flag in the world was unfurled in Kyiv on June 26, marking the 25th anniversary of a profoundly poignant anniversary for Crimean Tatars.  The flag, Nariman Dzhelyal, First Deputy Head of the Crimean Tatar Mejlis explained, “symbolizes our pride and purity of thoughts.  Our aim to live under the clear sky in our own land”.   Most of those present at the festivities in Kyiv and in many other cities in Ukraine have been forced into exile by Russia’s invasion of their homeland.  Twelve Crimeans, including the banished Head of the Mejlis Refat Chubarov and former political prisoner held for two years in Russia Gennady Afanasyev recited Lilia Budzhurova’s “When we return”, including the lines:

On June 26 it was 25 years since the reinstatement of the national parliament of the Crimean Tatar people – the Qurultay and the election of the first members of the Mejlis, or representative assembly which was headed by veteran Crimean Tatar leader Mustafa Dzhemiliev.

Since Russia invaded and occupied Crimea, both Dzhemiliev and Chubarov have been banished and now the Mejlis itself has been prohibited as ‘extremist’.

At least this year there were no reports of excessive measures from the occupation regime in Crimea, though the traditional car rally from Simferopol to Bakhchysarai with Crimean Tatar flags was banned.

According to Zair Smedlyaev, head of the Qurultay Central Election Commission, the day was celebrated but in smaller groups, and with actions that didn’t need to be “agreed with the de facto authorities” – literary or art competitions, flash mobs, games.  Crimean Tatars also place national flags on their homes and cars.

Both Ukrainian and Crimean Tatar flags generally elicit aggressive reactions from the occupation regime.  Four Ukrainians were detained, for example, at a totally peaceful gathering in honour of the great Ukrainian poet Taras Shevchenko on March 9, 2015.  The court chose to agree with the police that the Ukrainian flag, as well, presumably, as a Crimean Tatar Flag with words Crimea is Ukraine were ‘prohibited symbols’.