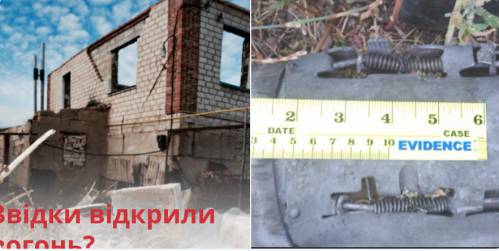 Rights activists have gathered vital evidence of direct shelling and military intervention from Russia in 2014 which they intend to pass to the International Criminal Court in the Hague.  The material is important in demonstrating that the conflict is of an international nature.  This will help victims defend their rights in international courts and also to refute the ongoing attempts to present the fighting in Donbas as a ‘civil war’.

The material compiled by the International Partnership for Human Rights [IPHR] pertains to the summer and autumn of 2014.  It is based on interviews with 45 witnesses and the IPHR’s own field investigations, as well as satellite images from the independent Bellingcat investigative initiative and OSCE monitoring mission reports.

Compelling evidence was found that:

Fighters from the Russian Federation took part in attacks on the villages of Kolesnykivka, Komyshne, Milove, Krasna Talivka, Dmytrivka and Pobeda.  There were confirmed attacks on civilian objects (rather than military infrastructure and border units) in Kolesnykivka and Komyshne.  These fall under Article 8.2(b) and (v) of the Rome Statute of the International Criminal Court.

Russia has consistently denied any involvement in the military conflict and continues to claim that any fighters either caught or whose engagement cannot be seriously disputed are ‘volunteers’.

This report is clearly vital in demolishing such denials.  It points out that satellite images, reports from eyewitnesses and on social networks indicate that the attacks did not come from some anonymous ‘volunteers’, but from Russian military units on the Russian side of the border.

The human rights groups involved in the report believe that the evidence of involvement by Russian armed and security forces and people linked with Russian military units qualifies the events of 2014 as an international armed conflict.

Svitlana Valko, the IPHR field mission coordinator, spoke with the BBC Russian Service about their work and the purpose of the report.   She stressed that neither the shelling, nor the illegal crossing by fighters across the border into Ukraine could have been organized without the help of Russian military units.

The rights activists spoke with 45 witnesses, both civilians and border guards, who have all expressed willingness to testify at international courts.  They also describe the findings from field missions in detail with such details as the shape of the crater formed from shelling making it easy to determine where it was fired from.  All of their examinations and measurements were videoed so that they can in future be used in court.

To avoid the standard arguments (voiced by the BBC interviewer) that witnesses were biased, 10 different sources of information were used.  Valko says that in general the testimony they received from border guards, who could well be loath to contradict the official Ukrainian position, did not differ significantly from that given by local residents.  Additional confirmation was then provided, for example, by satellite images taken around the period in question which showed a significant build-up of military equipment in a particular area.

Valko stresses the important role that Bellingcat has played in documenting Russian involvement in the fighting.  Their report differs in part because they have focused on different parts of the border, but also because of the work with witnesses and on the ground.  This is of crucial importance for future court trials.

Although documentary evidence and testimony in court are required, Valko points out that few local residents were in any doubt about where the shelling was coming from.  In the case of two villages, Kolesnykivka and Komyshne, Russia is on the other side of a river, and you could actually see the shells crossing it.  Ironically, the fact of the shelling did not per se determine how pro-Ukrainian or pro-Russian a resident was in their views.

Valko says that this new report will be given to people working on European Court of Human Rights cases involving prisoners of war.  Evidence of Russian involvement turning this, in legal terms, into an international conflict, is important quite simply for establishing POW status.

The evidence is also a vital supplement to testimony already provided on 300 cases of believed war crimes and crimes against humanity which IPHR passed to the International Criminal Court in the autumn of last year.

The report ‘Where did the shells come from?’ was prepared by IPHR, in cooperation with the Norwegian Helsinki Committee and the Ukrainian Helsinki Human Rights Union.  It can be downloaded in English and in Ukrainian.