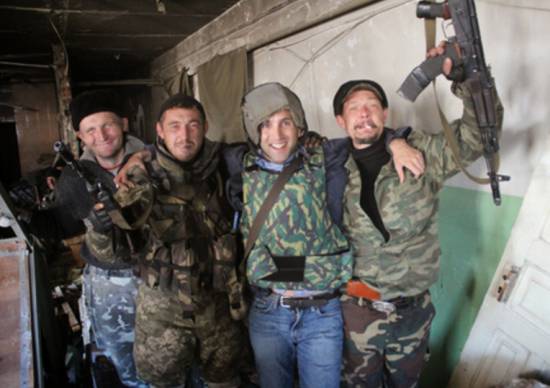 An open letter from Ukraine’s Ambassador to the UK and numerous appeals to British Prime Minister Theresa May over the pro-Russian propagandist Graham Phillips have some worrying elements, which pro-Kremlin media are delightedly reporting.  However reprehensible Phillips’ behaviour is with respect to Ukraine, Britain could certainly not restrict his ability to travel abroad, and it is surely not appropriate to ask for this.  It is authoritarian states who restrict their own citizens from travelling abroad.

As reported, particular revulsion was experienced by many of us seeing Phillips torment of maimed and partially blinded Vladimir Zhemchugov during his exchange by Kremlin-backed militants on September 17.  Phillips actually badgered him, telling calling him a zombie and saying that nobody needs an armless cripple like him.  This was a new low even for Phillips who is notorious for such stunts.  There are certainly multiple reasons why his behaviour over the last three years has elicited outrage.  The letter from Ambassador Natalya Galibarenko goes into some detail, although there is a great deal more that could be said.

The first issue, and it is indeed very serious, must be that Phillips is continuing to flout Ukraine’s ban on his entry.  He is now living in Ukrainian Crimea under Russian occupation, and frequently travels to Kremlin-backed militant-occupied Donbas via Russia.  He is, the Ambassador points out, continuing his “abhorrent behaviour and open public insults towards Ukrainian citizens and military men, who are defending Ukraine.”  This included the harassment and humiliating insults about Zhemchugov’s disabilities.

“In May 2014 he was detained by security forces of Ukraine on the grounds of providing support to pro-Russian terrorists in the Luhansk and Donetsk regions of Ukraine and, following request from the British side, was released in July 2014 and deported from the territory of Ukraine.”

He was then banned from Ukraine for three years as a threat to national security, but is now effectively hiding out on areas under Russian or Russian proxies’ control.  The Ambassador warns that if caught on Ukrainian territory, “he will immediately bear full consequences for his actions as it was in 2014. We will not hesitate to use all available instruments of international cooperation to make him accountable for his words and deeds.”

Ambassador Galibarenko mentions the calls to the UK’s Prime Minister “to investigate and prosecute Mr. Philips to the full extent of the UK laws for his reported terrorist ties and unlawful activities in Ukraine.”

While out disgust and condemnation seem completely justified, what could be proven and prosecuted over is considerably less clear.  Obviously direct links with terrorist organizations is punishable, if proven.  Openly supporting and providing propaganda for Kremlin-backed militants and Russia as aggressor would be much harder to prosecute over.  Ukraine has declared the militants terrorists, however Britain and most other countries have not.

The most problematical call in both the Ambassador’s letter and the requests to May is that concerning some kind of restriction on his travel.

All of this is being eagerly reported by the Russian media who constantly provide Phillips with just the coverage he wants, namely calling him a ‘journalist’, and implying that any attempts to stop him accosting and insulting people are ‘double standards’, with only some ‘journalists’ being defended.

Phillips is no journalist and his behaviour, were it to be called ‘journalism’ anywhere but in pro-Kremlin publications, would be a slur on real journalists.

Making sure that people are aware how low the man sinks for highly suspect motives is valid, as is surely to ask journalists to clearly state that what Phillips gets up to bears no relation to their profession.  More could well prove counter-productive, and simply give him more a new opportunity for publicity.