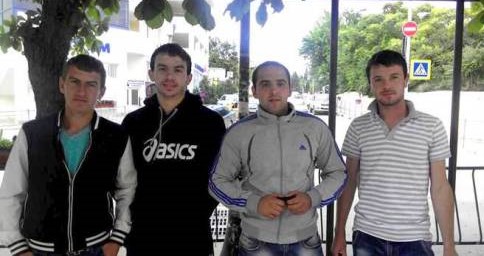 Four young Crimean Tatars from Sudak have each been fined 20 thousand roubles in Russian-occupied Crimea over a peaceful act of remembrance for the victims of the 1944 Deportation of the Crimean Tatar People which is recognized by Ukraine as an act of genocide.

A second ‘judge under Russian occupation proved more compliant than the first who back in June had shown the courage to recognize that the young men had not committed any offence.

Ablyakimov Ablyakim; Enver Chavush; Alim Muslyadinov; and Seitumerov Seitmamut were detained on May 18 (the anniversary of the Deportation) quite literally for driving through Sudak with Crimean Tatar flags on their cars.  Before Russia’s invasion and annexation of Crimea, a car rally from Simferopol to Bakhchysarai was one of the traditional symbolic acts of remembrance for over 100 thousand Crimean Tatars who lost their lives during the Deportation and in the first years of exile.

The men were charged with ‘infringing the established procedure for organizing or holding meetings, demonstration, etc. under Article 20.2 of Russia’s Code of Administrative Offences.

The Sudak City Court at its hearing on June 7 found nothing illegal in the young men’s actions, however this first note of sanity in over 2 years of Russian occupation proved short-lived.  The court’s decision was challenged, and on September 1 it was overturned, and ‘the case’ sent back for new consideration.

The ‘judge’ this time knew what was required and imposed the fines envisaged for the supposed ‘offence’.  Judging by one of the people supporting the men, the claim from the traffic police was that the Crimean Tatar flag was “a means of campaigning”.

This is now the third year that Russia as occupying force has both banned traditional remembrance gatherings on the anniversary of the Deportation and penalized Crimean Tatars for totally peaceful action.

There have also been detentions each year, with fines imposed for supposed infringements.

See:  Chief Rabbi of Ukraine: The world must not ignore the suffering of the Crimean Tatars the way it once ignored ours