Why a Trump Victory Would Put Ukraine in Danger. In Trump’s Own WordsMark it down, Mr Trump, Russia has already gone into UkraineNo surprises as Trump says he could recognize Crimea as ’Russian’ & lift sanctionsA British Foreign Secretary who excuses Russia’s invasion of Crimea?Kremlin’s Donbas proxies congratulate UK for ’doing what they did’ & voting for BrexitBrexit a gift to Putin, the far right & Trump, a blow to democracyEx-Mayor of London Boris Johnson blames Russia’s annexation of Crimea on the EUWhat European Values if Dutch Referendum Result Stands?Appeal by the leaders of Ukrainian national communities to the Dutch populationFormer Soviet political prisoners call on Holland to say yes to Ukraine’s European futurePlaying with fear and ignoranceHow a democratic tool became a threat to democracyUkrainian Jewish leaders appeal to Holland: Give our country the chance to break with the pastDutch referendum puts Ukraine in spotlightTrump is on collision course with international law over CrimeaRussian media distort mass anti-Trump protests, while Trump blasts ‘dishonest’ US mediaUSA Today Parrots Kremlin Propaganda on CrimeaRussia’s Old Tricks Against New TargetsUkraine: No peace talks possible if Russia continues with fake referendums to annex Ukrainian territory Retired Ukrainian naval commander abducted, tortured and taken to Russian-occupied Crimea ‘for trial’
• Topics / Politics and human rights 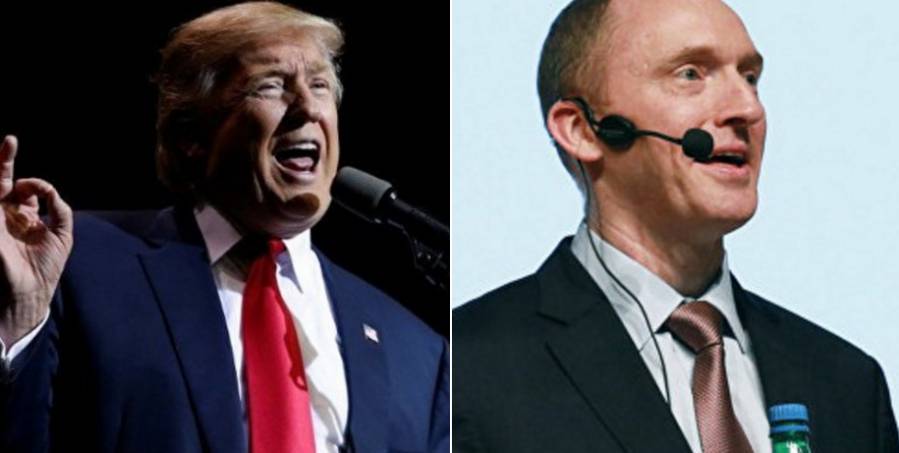 Kremlin-funded media are careful to refer to Carter Page as Donald “Trump ex-adviser” but the coverage they are giving to Page’s current visit to Moscow is certainly not that accorded a person whose influence and role are in the past.  Page himself is strongly implying that his visit is of relevance for the immediate future.  That makes his statements about the supposed ‘narrative’ on Crimea, Ukraine in general and about sanctions, chilling.

Since there is nothing in Page’s statement about the reason for the sanctions, it is well to recall that the first sanctions were imposed over Russia’s invasion and annexation of Crimea in February and March 2014.  These were extremely mild and the threat of harsher sanction remained largely words throughout the following months as Russia armed, manned and financed military conflict in Eastern Ukraine.  Tougher sanctions were imposed after a Russian-produced BUK missile downed Malaysian airliner MH17 over the Kremlin-backed militant-controlled area on July 17, 2014.  It is generally believed that the sanctions were instrumental in curbing Russia’s military aggression against Ukraine.

This, however, is not the message from Page.  He was asked by the state-controlled RIA Novosti if he expected the sanctions against Russia to be removed soon, and whether American companies wish to return to Russia.

Page specifically referred only to the second question asserting that the wish to return was great among both American and European companies.  He does, however, claim that the “hostile sanctions against Rosneft” had mainly hurt western companies and not achieved their aim.

He was then asked if he expected that the new US Administration would recognize Crimea as Russia and what role and place would be given to Ukraine.

“The history of the events of recent years in Ukraine generally, and Crimea in particular, may be one of the most shocking examples of ‘fake news’ in recent times.  The level of misinformation on which the decisions of outside players and their influence on that country were based was catastrophic. I am convinced that there will be new opportunities for overcoming these misconceptions and the wrong direction that was created for Ukraine”, Page replied.

Page was speaking to state-controlled media who, understandably, did not ask him to explain his words.  US media and those investigating Russia’s role in the US elections would do well to probe.

Russian troops without insignia seized control of Ukrainian territory from Feb 27, 2014.  That is a fact.  So too are the multiple grounds for rejecting Russia’s claim that the Crimean population voted to join Russia in a pseudo ‘referendum’ observed by pro-Russian far-right and neo-Stalinist parties on March 16.

Page’s remarks come just weeks after the Chief Prosecutor of the International Criminal Court concluded that Russia’s invasion and ongoing occupation of Crimea constitute an international military conflict over which the Court has jurisdiction.

There is a massive bulk of evidence to indicate that Russia has played a direct role in the military conflict in Eastern Ukraine, with the war crimes involved almost certainly including the Russian Buk missile which killed almost 300 civilians on MH17.  This could not have ended up in militant-controlled territory without permission from, at very least, the Russian Defence Ministry.  Russia’s role in the downing of MH17 is one of several crimes and / or violations by Russia where Trump has adopted a policy of near denial very close to that promoted by the Kremlin and pro-Kremlin media.

Page was (or is) a foreign policy adviser to Donald Trump during the presidential campaign.  He was one of several members of the Trump team whose links with Russia have caused concern.  It was such negative publicity that led to both Page and Paul Manafort being formally removed.  In Page’s case the scandal was over accusations that he had met with top Russian officials to discuss a potential alliance between a Trump presidency and the Kremlin in July.

Page then elicited gasps from many observers in October by penning an article for Sputnik, the most open of the Kremlin-funded propaganda vehicles.  The article in October slammed what Page called “arrogant’ Washington foreign policy” which he alleged thwarted common goals between US and Russia”.   In the Dec interview for RIA Novosti, Page talks of the need for “mutual respect at a personal level” between US and Russian Presidents.

Trump himself has, since 2014, often made statements that indicated admiration for Russian President Vladimir Putin and his aggression against Ukraine.  He has also directly said that he would look at removing sanctions and recognizing Crimea as Russian.  This would be in direct violation of the UN General Assembly Resolution of March 27, 2014 and international law and would clash with the likely findings of the International Criminal Court.  It would also make a farce of US commitment to fundamental human rights, the increasing violation of which in Russian-occupied Crimea is widely-recognized and documented in numerous reports.

Attempts to believe that Page is in Moscow for himself are belied by his own words, but also made more difficult by another apparently imminent appointment.

One of the key contenders, or possibly already Trump’s choice for Secretary of State is Rex Tillerson, the CEO of ExxonMobile and a man with strong Russian links.  The Wall Street Journal commented on Tillerson’s holdings of Exxon shares and pointed out that these would only gain in value if Russian sanctions were dropped.

Trump would appear to believe that business interests and “knowing the players” constitute a selling point in favour of choosing Tillerson.

There is every reason to believe that the Kremlin would be all in favour of the appointment.  Tillerson’s company has various joint ventures with Rosneft and he himself was awarded Russia’s ‘Order of Friendship’ in 2012.

The new appointment and Page’s visit to Moscow are taking place against a background of new revelations regarding the degree to which Russia is believed to have directly interfered in the US elections to secure a Trump victory.