Many detained in Russia for reading aloud the Russian Constitution 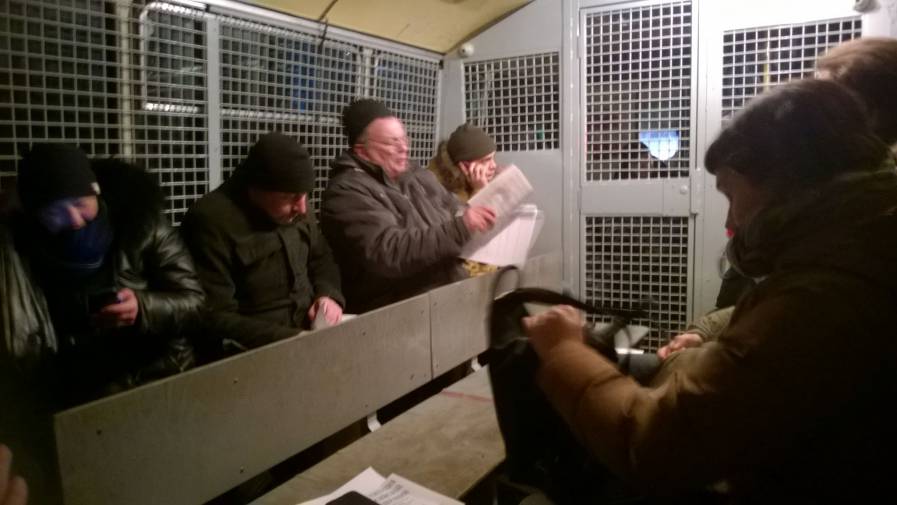 Russia’s Constitution being trampled, one young woman being detained

At least 15 people were detained in Moscow on Dec 12, Russia’s Constitution Day, for a peaceful action reading the Constitution aloud. In St. Petersburg an activist is spending the night in police custody for a single person picket which even under Russia’s current unconstitutional legislation is legal.

The last of the 15 Russians detained in Moscow on Russian Constitution Day for exercising their constitutional right to freedom of peaceful assembly were released late on Monday evening.  The police had drawn up protocols, indicating that they will face administrative charges, and six of the activists initially refused to leave the police station until they were given copies.  The documents will almost certainly be used in court to impose steep fines, with the likely claim that they had ‘infringed the procedure for holding public gatherings’ or that they disobeyed a police officer’ virtually never questioned by the courts.

In St. Petersburg, Yana Turbova was detained outside the Constitutional Court where she was holding a legal single person picket.  In her case the police have thrown both charges at her – of infringing the rules and disobedience, with this carrying a possible short period of imprisonment.   There was no information on how her actions had supposedly breached procedure or what the police considered to have been her disobedience.

Igor Andreev was detained at the same time but later released.  He told OVDinfo that a protocol was drawn up, but he doesn’t know what the charge was since he does not, on principle, sign such documents.

Some of the activists, like Viktor Kapitonov, had already been fined for reading the Constitution aloud in September, and all certainly knew that their actions, while in full harmony with the Constitution, could lead to their detention.

Kapitonov, who is disabled, learned to his cost what detention can mean on October 7 this year when he tried to hold a single-person picket in memory of Anna Politkovskaya, the journalist, rights activist and bitter Kremlin critic who had been gunned down on President Vladimir Putin’s birthday 10 years earlier.  He was savagely beaten and ended up in hospital with a broken arm.

The Constitution readings on Dec 12 were part of a civic campaign entitled ‘Witnesses of the Constitution’ [see: #СвидетелиКонституции].  The activists seek to revitalize a denigrated deadwood document, and say that it is only Russian citizens themselves who can bring the Constitution to life.

Russia’s Constitution guarantees all fundamental human rights and liberties.  Under Putin, a former KGB officer, it has become as ornamental a document as the Soviet Constitution a generation ago.