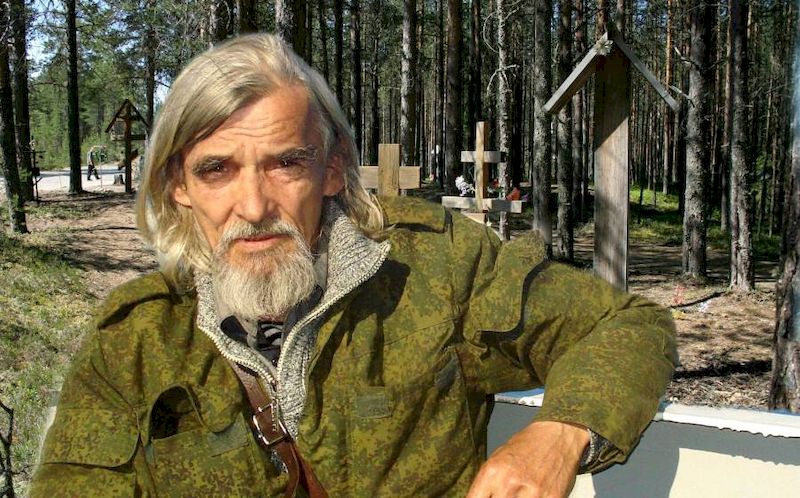 Yury Dmitriev is a Karelia historian who has devoted the last 30 years to ensuring that the history of the Soviet Terror is known, and that the unmarked graves of countless victims honoured. Judging by the harassment he had faced in the weeks leading up to his arrest on Dec 13, 2016, this has made him enemies, and there are strong grounds for concern over the criminal proceedings initiated against him.

Dmitriev has been charged with ‘preparing and circulating child pornography’ over photos of his own adopted daughter, Natasha, who is now 11, together, in at least one case, with his granddaughter.  He has been remanded in custody for two months, and could, if convicted, face an 8-15-year sentence.

Prominent human rights activist Sergei Krivenko told the Karelian 7x7 journal that Dmitriev’s lawyer Viktor Anufriev has finally been able to see the photos (49 in a folder) and says that these were in fact like a medical journal kept over 3 years, until 2015.  Dmitriev and his former wife had adopted Natasha from a children’s home when she was 3, extremely thin and in poor health.  It was in fact the authorities who had asked them to monitor her development.  Krivenko says that Dmitriev took the task seriously and photographed her, each time recording her height, weight, and whether her ribs were still protruding.  The photographs were sometimes taken before the social services were supposed to turn up to demonstrate also that the little girl was not being beaten, etc.  The social services had never found anything untoward, and Dmitriev had long stopped taking the photos.  For the above reasons, Krivenko is convinced that the Investigative Committee’s assertion that Dmitriev had from 2012 to September 2015 been ‘preparing child pornography’ is provocation against the historian.

The prosecutor’s office had supposedly received a letter denouncing Dmitriev and informing them of the photos.  The story is strange since Dmitriev had not shown anybody the photos and they had never been posted anywhere. Dmitriev’s family instead link the charges with an unexplained visit by intruders.  Shortly before Dmitriev’s arrest, they had noticed that somebody had been in their flat and had been on their computer, although nothing had been stolen from the premises.  There had also been phone calls with the unidentified caller demanding to know whether Dmitriev was planning to look for those who carried out persecution.

There are other suspicious elements.  One of Dmitriev’s 2 adult daughters Yekaterina says that on the day her father was arrested, she got a phone call from the Investigative Committee. The person claimed that the photo of Natasha with Yekaterina’s daughter, both running naked into the bathroom, had ended up on social networks.  Yekaterina pointed out that her father was not registered on any such social networks.

Dmitriev was arrested in his home in Petrazovodsk on Dec 13, while his partner was in hospital following an operation.  She was therefore not in a position to object when the authorities also took Natasha away from school and placed her in a so-called ‘rehabilitation centre for minors’.  Dmitriev’s other daughters have now been stopped from seeing their sister, and it is possible that the investigators are trying to put pressure on the little girl to testify against her father.

Publicity and maximum openness about the case are vital.  It is certainly noticeable that nobody in Karelia, or among Dmitriev’s colleagues, finds the charges credible.

Dmitriev is the head of the Karelia branch of the internationally renowned Memorial Society.  Memorial has issued a statement calling the charges implausible and asking the prosecutor to take the case under his personal control.  The Karelia Union of Journalists has issued an appeal, as have a large number of Ukrainian historians, human rights and civic activists and MPs who stress the enormous role Dmitriev has played and call his imprisonment yet more evidence that Russia is slipping back into Stalinist and post-Stalinist repression and terrorization of its own citizens.

Dmitriev is a well-known historian and civic activist who is best known for his discovery of the huge unmarked grave in the Sandarmokh Clearing (Karelia).  It is known, thanks to Dmitriev and his colleagues, that the clearing holds the last remains of 1,111 prisoners of the Solovky Labour Camp who were executed ‘by quota’ between 27 October and 4 November 1937.  The 290 Ukrainians murdered included playwright Mykola Kulish, poet Mykola Zerov and very many other prominent artists, scientists and public figures.

Dmitriev has also published a Book of Remembrance with the names of 13 thousand victims of the Great Terror of 1937-38.

There has been mounting resistance under Vladimir Putin to all efforts to reinstate historical truth, and particular opposition to all initiatives aimed at naming the perpetrators of the Terror, not only the victims.  Jan Rachinsky, a member of the Memorial Board, told Novaya Gazeta he thought it possible that Dmitriev was being persecuted specifically because of his work fighting Stalinism and the relics of Soviet totalitarianism.

According to Novaya Gazeta’s unnamed source “close to the Petrozavodsk police”, Dmitriev could have been arrested because he had promised to prepare a Karelian ‘list of executioners’.  This is in fact a Memorial project aimed at naming the NKVD officers implicated in the deaths of innocent people.

There is also a petition calling for Dmitriev’s release.  Its authors ends by writing that “the authors of the provocation directed against Yury Dmitriev are convinced that modern Russia scarcely differs from the USSR in the time of the Great Terror, that you can just as definitely fabricate insanely absurd charges against the worthiest people in the country.

The development of events around Yury Dmitriev will demonstrate whether or not they are right.

Please sign and, if possible, circulate the petition here.