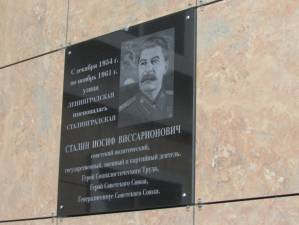 A memorial plaque to Joseph Stalin is to be erected in the centre of Simferopol, the second sculpture to the bloody dictator since Russian annexed Crimea.  It will be formally unveiled on May 8, flanked by posters on which the tyrant responsible for the death of millions ‘greets’ Crimeans with Victory Day.

The news of the plan to erect the memorial plaque coincided with the formal application by the Mejlis, or Crimean Tatar representative assembly to hold the traditional remembrance gathering on May 18, the anniversary of Stalin’s Deportation of the entire Crimean Tatar people.  Last year the occupation regime banned remembrance events, and they have thus far given no reason to expect any change in position.

The plaque will be on the façade of a building owned by the Crimean Committee of the Russian Communist Party and has been planned since the beginning of this year.  The communists’ application to erect such a plaque at the Simferopol railway station to mark Stalin’s arrival for the Yalta Conference on Feb 4-11 1945 had been turned down, but, according to a spokesperson from the party, “in a soft form”.  They therefore found another site, in the very centre of Simferopol.

In February a monument called ‘the Big Three’ was unveiled with Stalin, US President Franklin Roosevelt and British Prime Minister Winston Churchill.   An attempt to erect the same monument 10 years earlier had failed.  Under Russian occupation there was no discussion, and the deep outrage expressed by many, and particularly Crimean Tatars, was simply ignored.

Mejlis representative Abduraman Egiz called that monument “sacrilege”.  He said that since the attitude of Crimean Tatars to Stalin is well-known, “if they do erect the monument, this will be an open demonstration of their attitude to the memory of Crimea and of our people”.

There have been many such demonstrations since Russia invaded and annexed Crimea in 2014.  There are also ever increasing signs that the policy initiated by Russian President Vladimir Putin to focus on the “positive” aspects of Soviet and Russian history, including an allegedly positive role played by the dictator, has resulted in a record number of Russians justifying Stalin’s repression.

According to a Levada Centre survey entitled “Stalin and his role in the history of the country”, at the beginning of the 2000s, the majority of Russians still viewed Stalin negatively.  In March 2015, 39% viewed him in a positive light, with 30% of these respecting him; 7% liking him; and 2% - expressing admiration.

In its statement Memorial was scathing of the attempts every year around May 9, but especially on round date anniversaries like the present seventieth anniversary of Victory Day to establish monuments to Stalin or at least hang his portrait everywhere.  Trying to camouflage this by showing the dictator with marshals, leaders of the Alliance, etc.  does not change the essence.

“The erection of any monument with the figure of Stalin is a sacrilege. Stalin’s crimes were unparalleled in the country’s history. Their scale is such that the appearance of his image in public spaces in any positive context is unacceptable and should be banned through legislation.

This is in no way trying to expunge Stalin from history and prohibit his mention as Stalin himself did with those former associates whom he had killed. However the place for dictators is in museums, textbooks, historical works – in the context of their deeds, and not on the squares of cities.

We would remind people that in the monument marking the thousandth anniversary of Russia in Novgorod, established in 1862, there is no image of Ivan the Terrible among the outstanding Russian figures. They decided not to put him in because of his evil deeds, even though the role of that tyrant in the country’s history was quite noticeable.

There are limits beyond which a person loses the right to public respect. The lack of a legislative ban on the public glorification of Stalin demonstrates that the State has yet to understand that such limits exist.”

The degree to which Stalin has become a fixture of Russian occupation of Crimea, since the first large portrait of the dictator was erected near the WWII Memorial in Simferopol forces even more disturbing conclusions.  It is perhaps a matter of debate whether Putin’s attempts to have Stalin presented as a strong leader, a ‘good manager’, etc. are aimed at glorifying himself, but the aggressive mantra since Russia’s invasion that “Crimea is ours” [Крымнаш] is beginning to merge with “Stalin is ours” and that is both profoundly upsetting, and terrifying.