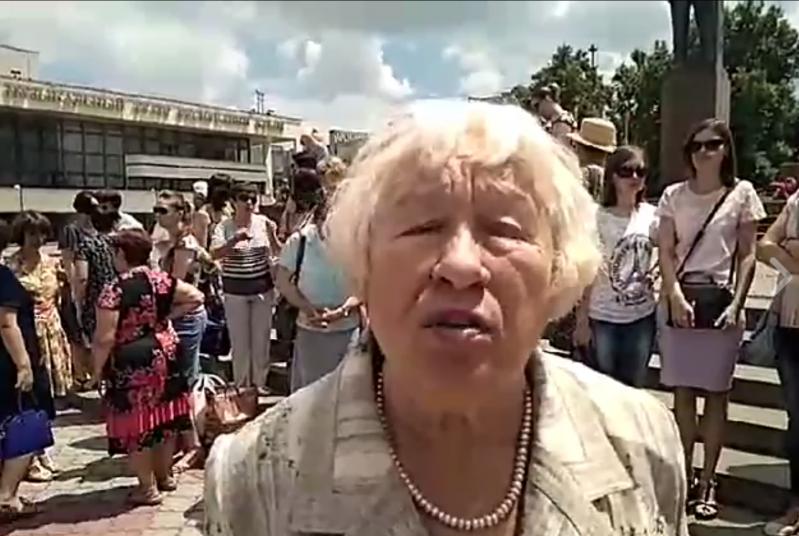 Elderly people and mothers with children were among those detained in Russian-occupied Simferopol on June 26 at a totally peaceful protest at plans to ‘nationalize’ the Salute Children’s Camp.  The two organizers of the protest are now facing administrative proceedings, while others were forced to provide ‘an explanation’ in writing.  Under Russian occupation, any peaceful protests are increasingly being stopped.

Members of the Culture Trade Union were protesting against the Russian-controlled authorities’ plan to take over the children’s camp which was once created and was always run from their contributions.  According to Ilya Bolshedvorov, his union had sent countless appeals to the head of the local authorities who has basically avoided speaking with them.  He had also twice tried to agree the protest with the authorities but had the applications turned down.  For that reason, the people present avoided banners or any other attributes of ‘mass meetings’.

The video here shows people standing peacefully, some explaining why they were there, when Sergei Nikitin and other police officers turned up and began demanding to see ‘authorization’ for the protest.  They then hauled many of them, including mothers with children, off to a police van and took them away to a police station.

Probably from the stress of the situation, the Head of the Culture Union, Halyna Lemeshko became unwell in the police station and was taken away by ambulance.

In turning down the applications, the ‘authorities’ had claimed that another event was planned at the same place (Lenin Square in the centre of Simferopol) and time.  It is evident from the video that nothing else was taking place and that the protesters were not in anybody’s way.

Bolshedvorov told the Crimean Human Rights Group that protocols were drawn up against both him and Alexander Trunov from the Union.  This means that both are  now facing administrative proceedings for supposed infringement of the rules for holding a mass event (Article 20.2 of Russia’s code of administrative offences).

The occupation regime started banning traditional Crimean Tatar gatherings, including the remembrance events for victims of the Deportation within months of their invasion.  Any pro-Ukrainian demonstration became inconceivable and dangerous at around the same time, and remains so.  People have been detained merely for taking photographs of themselves with the Ukrainian flag, and on most important anniversaries, like the Deportation, a Crimean Tatar flag will also get you detained.

It is clear from the comments on the above video that some of the participants at least supported Russia’s annexation.  They are clearly disillusioned at least about the promised changes to their life.  The same was seen at an attempted protest which was violently dispersed in June 2016.   One of the organizers of that protest, Pavel Stepanchenko actively supported the Russian invaders in Spring 2014.  He and a journalist Alexei Maximov have been imprisoned since October 2016, probably on fabricated charges laid after they criticised the local authorities.

The Crimean Human Rights Group has documented recent infringements of the right to peaceful assembly, with their report available in English and in Russian.