FSB use power outage as pretext to detain Crimean Tatars 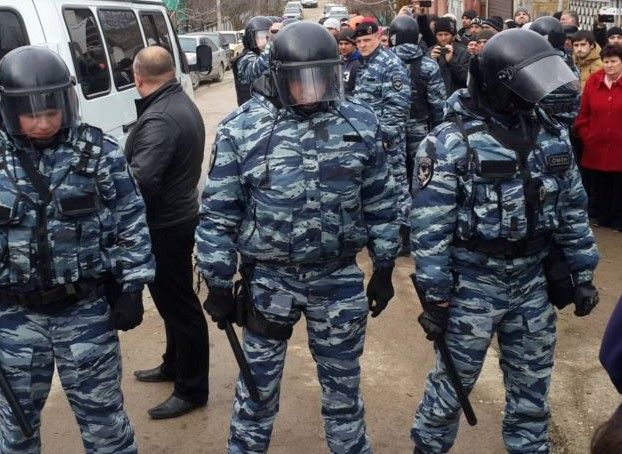 The FSB in Russian-occupied Crimea took no time after an accident outside Alushta which temporarily cut off gas and electricity supplies to start looking for ‘saboteurs’.  No time, according to local specialists, for any kind of expert assessment as to whether it had in fact been an act of sabotage.

Judging by the people detained, facts were of much less interest than the propaganda value to be gained by calling it sabotage and hunting for people to blame.

Several Crimean Tatars are known to have been illegally detained, including the brother of imprisoned human rights activist Emir-Usein Kuku.

Ebazer Kuku told the Crimean Human Rights Group [CHRG] that he had been taken from his home to the Yalta police station on November 1.  They had provided no explanation as to why he had to go with them, and in the station gave no reason for why they made him give them a DNA sample, and be photographed.

Ebazer Kuku did, however, call a lawyer when they tried to take his fingerprints.  On the lawyer’s advice , he told them that they had no right to detain him for more than 3 hours nor to take fingerprints without his lawyer present.

The police took a detailed written explanation regarding where he had been and what he had been doing on October 31, as well as what vehicles he owns.  They asked him also who he knows in organizations banned in Russia.

He was then released, but says that he saw three other Crimean Tatars in the police station, all having fingerprints and DNA taken.

CHRG has given a very long list of the flagrant infringements over the detention of Ebazer Kuku, with it likely that these apply just as well to the treatment of any other Crimean Tatars targeted.

As mentioned, it is probably too early to say that any sabotage was carried out, and at least in Ebazer Kuku’s case there is nothing to indicate that there were any legitimate grounds for his detention.

The same can be said of Emir-Usein Kuku’s ongoing imprisonment.  Back in 2014, Kuku had reacted to the disappearances of young Crimean Tatars, the groundless armed searches, etc. under Russian occupation by joining the Crimean Contact Group on Human Rights.  There was a clear attempt to abduct him on April 20, 2015, with this turning into an FSB ‘search’ only after people came to Kuku’s assistance, and his assailants were surrounded.  Neither then, nor in charges over Facebook entries in December 2016, was there any mention of a link with Hizb ut-Tahrir, the peaceful pan-Islamist organization which is legal in Ukraine, but which Russia has decided to label ‘terrorist’.  The organization is not known to have committed any act of terrorism (or blown up power lines!) anywhere in the world, but this does not stop Russia from arresting Muslims and sentencing them to huge terms of imprisonment for alleged ‘involvement’ in the movement, no more.

On February 11, 2016, Kuku was arrested, together with Muslim Aliev; Vadim Siruk and Envir Bekirov.  Two other younger men – Arsen Dzhepparov and Refat Alimov – were arrested on April 18, 2016 and charged in this same ‘Hizb ut-Tahrir case’.

The Russian media have on several occasions produced toxic propaganda about the FSB’s ‘Hizb ut-Tahrir cases’ to mislead their audience about unwarranted searches of Crimean Tatar homes and arrests of other Crimean Tatars streaming information onto the Internet or simply standing nearby, showing totally peaceful solidarity.

It seems that the FSB is doing something similar itself. Mikhail Savva, a Russian political analyst who is now living in Ukraine, is convinced that Russia’s FSB will use the accident near Alushta, and any other emergency, to intensify repression. He predicts more people being imprisoned and further development of mechanisms for falsifying criminal prosecutions.

He does not know what happened outside Alushta, however it is telling that a similar accident cutting power supplies in Russia’s Moscow region was not automatically treated as an act of terrorism.