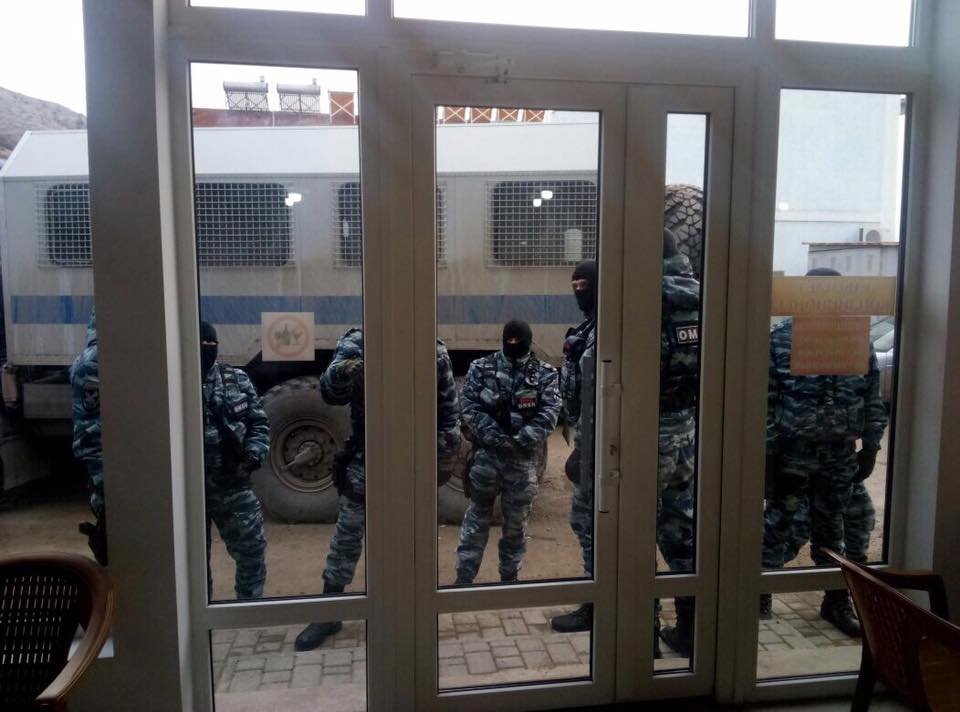 In the latest attack on the Crimean Solidarity civic initiative, a huge contingent of Russian OMON riot police have disrupted the monthly meeting held to discuss ways of helping political prisoners and their families.  There was no real attempt to come up with a credible reason for what was clearly an attempt at intimidation  - one that follows the arrests of several Crimean Solidarity activists on trumped-up charges.

Crimean Solidarity has long irritated the occupation regime in Crimea.  The initiative was launched amid the rising number of political prisoners, many of whom have young children.  It was urgently needed, since as well as the scars inflicted on children present when armed and masked men have burst into their homes taking their fathers away, there are also practical issues needing to be resolved.  The imprisoned men are often the sole breadwinners, and the initiative has helped coordinate assistance for the families.  The monthly meetings are attended by people of quite different ages – the parents, wives and children of political prisoners; lawyers; journalists and other members of the community.

The meeting on 27 January in Sudak was the twenty second such gathering.  Around 150 people were present at 14.30 when two police vans turned up with up to 100 OMON riot police, some with dogs.

The officers cordoned off the entire building and blocked all exits, claiming that they had received ‘a report’ that there was a large gathering of ‘suspicious-looking people’ who had taken a lot of bags into the hall and possibly weapons.  They then proceeded to carry out what was effectively a search without any warrant.  They brought police dogs into the hall where there were many young children, as well as elderly people.

Since any ‘phone call’ had long been checked and found to be a false alarm, the measures were quite clearly excessive, and aimed both at identifying all those present and sending an undisguised threat of what people can expect for their solidarity.

Lawyer Yevhenia Zakrevska believes it possible that administrative proceedings could be brought against participants, with the standard claim that they had breached the rules for a peaceful gathering.  The charges would be grotesque since the said legislative norm cannot possibly apply to a gathering in a private venue, however this would not be the first time that entirely legal behaviour is alleged to be a ‘violation’, with steep fines imposed.

Abdureshit Dzhepparov, Coordinator of the Crimean Human Rights Contact Group, later told Krym.Realii that the main aim of Saturday’s operation had been to intimidate Crimea Solidarity activists into ending their gatherings.  He insists that the activists will not be cowered by such actions.

As mentioned, this is not by any means the first attack on Crimea Solidarity activists.  The worst was the arrest on October 11 of six Crimean Tatars on charges of ‘involvement’ in the Hizb ut-Tahrir movement which is legal in Ukraine and most country, but which Russia has labelled ‘terrorist’, without ever providing a proper explanation.  The men included at least three active members of Crimea Solidarity: Seiran Saliev; Timur Ibragimov and Marlen (Suleyman) Asanov.

It is impossible to view this as coincidence when so many other activists from Crimea Solidarity have faced armed searches, sometimes with effective abduction,  prosecution over social media posts from well before Russia’s invasion and similar over recent months.