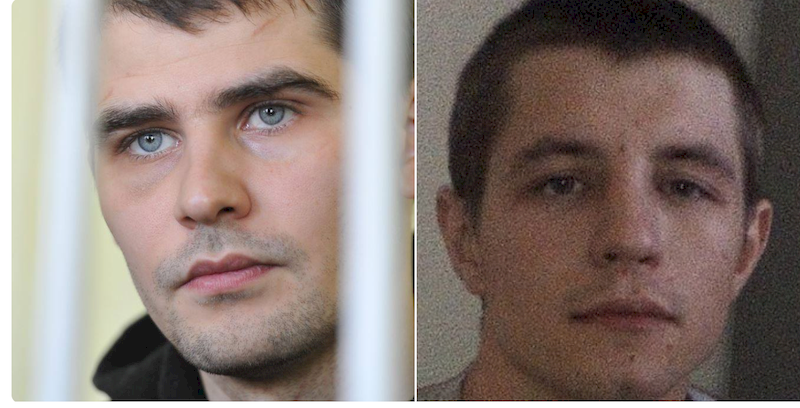 There are several former Euromaidan activists among Russia’s Ukrainian political prisoners, with two openly convicted on surreal charges linked with Maidan.  It has long been assumed that the persecution of Oleksandr Kostenko and Andriy Kolomiyets was in revenge for Moscow’s failure to prevent Ukraine’s Revolution of Dignity, with this only confirmed by the measures taken to make Kostenko’s last weeks in prison as hellish as possible.

Kostenko was one of the first political prisoners ‘convicted’ by Russian-controlled courts in Crimea.  If you ignore the fact that the charges were unprovable and pertained to alleged events in Kyiv over which Russia could have no jurisdiction, the sentence was relatively short.  Application for early release on parole was, predictably, rejected, but now Russia cannot keep him imprisoned longer than 3 August 2018.

A member of the Kirov oblast Public Monitoring Commission [ONK] Denis Shadrin has reported that Kostenko was placed in a punishment cell [SHIZO] on 21 June.  The grounds sound fabricated, however Kostenko could not deny them, as you get an extra 10 days punishment for objecting.  Kostenko himself believes that the prison staff are finding any pretext to punish him before his release.  The conditions in the SHIZO are particularly bad, and Kostenko is clearly near breaking point.  He told Shadriin that he would be ready to made a suicide attempt in protest at the punishments being meted out.

Oleksandr Kostenko was recognized by the authoritative Memorial Human Rights Centre as a political prisoner in April 2015.  The 32-year-old Ukrainian from Simferopol is a former police officer who took part in Euromaidan from December 2013.

He was arrested in Russian-occupied Crimea on Feb 5, 2015, and savagely tortured for over 24 hours before the officially recorded time of arrest.  The injuries he sustained included a broken arm which has never been properly treated, and he is now in danger of losing any movement in that arm.  The only ‘lawyer’ present was one appointed by the investigators, and a ‘confession’ was obtained from Kostenko, as well as a statement that he had been beaten on the street by unidentified individuals.

Kostenko retracted all such ‘confessions’ as soon as he was able to see to a real lawyer, and his real lawyer, Dmitry Sotnikov has since tried in vain to get criminal investigations initiated over both the initial torture, and ongoing ill-treatment of his client while he was held in detention.

The court ignored both the surreal absurdity of the indictment and Kostenko’s retraction of his initial ‘confession’.  On May 15, 2015,  judge Viktor Mozhelyansky from the Kievsky District Court in Simferopol found Kostenko guilty of both charges, and sentenced him to four years imprisonment.  The sentence was later reduced to 3.5 years.

25-year-old Kolomiyets is  from the Kyiv oblast, and was living in the North Caucasus with his partner, now wife Galina and her children when he was seized by local police on May 15, 2015, tortured, and then taken to Crimea.

There he was charged with ‘attempted murder’ of two Ukrainian Berkut officers during the Euromaidan protests in Kyiv.  It was claimed that he had thrown a Molotov cocktail at the two Ukrainian officers which “caused them pain”.   They had never made any complaint at the time, nor sought medical treatment, yet two and a half years later they both claimed that they remembered Kolomiyets and “their pain”. The prosecution was under Article 30 § 3 and 105 § 2 of the Russian Criminal Code, namely “attempted murder of 2 or more people in connection with their official activities … out of motives of political and ideological hatred”.

Kolomiyets was sentenced to 6 years on the ‘attempted murder’ charges and 4 years over the hashish charge.  He is imprisoned in the Krasnodar region.

Please write to Andriy Kolomiyets.  His sentence is long, and the letters are an important message to him, and to Moscow, that he is not forgotten.

Letters need to be in Russian, and on totally ‘innocuous’ subjects.  If that is a problem, please just copy-paste the message below, maybe with a picture or photo.  Letters need to weigh no more than 100 g. or they simply won’t be delivered, and it’s a good idea to give your return address, since they may well want to reply.