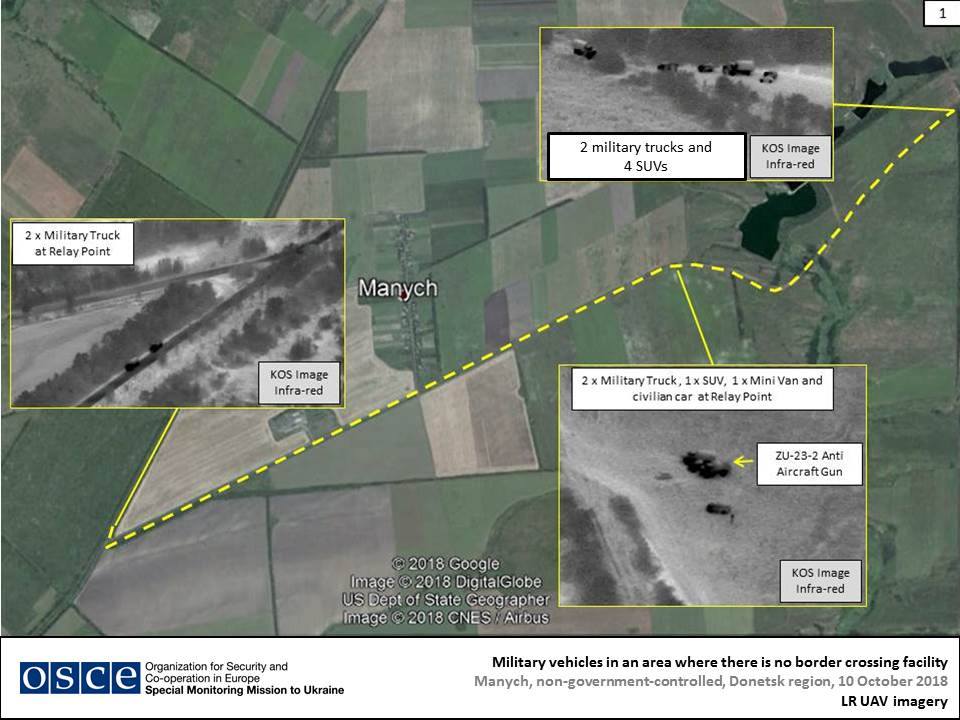 Should the International Criminal Court at the Hague still be in any doubt as to Russia’s direct role in the conflict in Donbas, it need only read the reports of the OSCE’s Special Monitoring Mission since August this year.  Russian military trucks and other vehicles have been spotted at least five times, three in the last week, travelling by night to and from the Ukrainian-Russian border via dirt roads where there is no official border crossing. Attempts to block (or ‘jam’) the drone’s GPS signal suggest that Russia is well-aware how incriminating such evidence is.  It is also likely that these are not the only illicit movements undertaken at night to avoid being detected.

During the night from 9-10 October, OSCE SMM reports that its unmanned aerial vehicle [UAV] “spotted vehicles move north-east on a dirt road near the border with the Russian Federation where there are no border crossing facilities in a non-government-controlled area of Donetsk region.”

The first spotting was at around 23.00, when the UAV detected four Ural and KamAZ covered cargo trucks, as well as four cars.  All were stationary, and there were about 20 persons walking between them.

At 00.30, all the individuals got into the vehicles.  Three Ural and the KamAZ trucks, together with three cars, headed further towards the border with the Russian Federation, while one Ural and a car travelled towards Manych (which is non-government controlled).

Similar activities were observed late in the evening of 10 October.  At around 23.00, two trucks (a Ural and KamAZ), together with four sport-utility vehicles, were recorded driving to a location near the border where the SMM had reported a convoy of covered cargo trucks entering Ukraine during the night from 7-8 August.

“During the same period, the UAV spotted two Ural trucks (one mounted with an anti-aircraft-gun (ZU‑23, 23mm)), a minivan and a car in a field along the same dirt path, approximately 2km from the border.”

There is no clarity as to which direction the truck with the anti-aircraft gun had been travelling in, though clearly such a Russian weapon had no business being in Ukraine at all.  It also seems extremely likely that Russia did not want its movements observed, since it was at around 23.45 that the SMM was forced to recall the UAV “due to multiple instances of GPS signal loss assessed as jamming.”

SMM has reported new sightings during the night of 11-12 October.  Between around 22:20 and 01:40, two trucks (probably Ural) were spotted parked along an unpaved road half a kilometre south of the centre of Manych.

The UAV observed two sedans travelling from the border which parked on the side of the road, and established a makeshift checkpoint about 100m north-east of the location where the three groups of vehicles had parked and 3.5km east-north-east of Manych.   The other vehicles came up to this improvised checkpoint in pairs, and after interacting with the people present, continued travelling eastwards.  The two sedans turned around at 01.22 and travelled eastward in the direction of the border with the Russian Federation.

At 01:34, the UAV spotted a KamAZ truck with a twin axle trailer, two Ural trucks and a KamAZ truck as well as a sport-utility vehicle traveling westward on the same road from the border with the Russian Federation in the direction of Manych.

As reported, the first of such sightings during the night of 7-8 August clearly indicated that the large numbers of Russian military and other trucks travelling by night to avoid detection were moving in both directions.  Convoys moving to and from dirt tracks leading to the border passed each other for around five minutes, with each separately stopping both next to a vehicle parked in a field along the dirt track, and then next to two trucks parked at the intersection of the dirt track and the paved road.  The convoy coming into Ukraine was later observed in territory within the so-called ‘Luhansk people’s republic’.

During the night from 4-5 September, the UAV spotted another night convoy of ten Russian KamAZ trucks.  The ten canvas-covered cargo trucks were seen at around midnight, together with four escort vehicles, all parked in a single file line, with 10-15 people walking between the vehicles.  At around 00.30 the trucks moved towards the dirt road leading to the border with the Russian Federation, while the escort vehicles stayed in Ukraine.

Russia has repeatedly tried to deny that the BUK missile which downed Malaysian airliner MH17 on 17 July 2014 came from Russia (or, as the Joint Investigation Team has concluded, “from the 53rd Anti-Aircraft Missile brigade which is a unit of the Russian army from Kursk in the Russian Federation”).   It has also tried, over the last four and a half years to deny any direct involvement in the fighting in Donbas.  During preliminary hearings on March 7, 2017 into Ukraine’s suit against Russia at the UN’s International Court of Justice, a Russian representative claimed that the main source for the vast amounts of weapons and ammunition used by fighters of the self-proclaimed ‘Donetsk and Luhansk people’s republics’ [DPR, LPR] “are stockpiles inherited by Ukraine in 1991 from the Soviet Army”, as well as “the retreating Ukrainian army”.

At the International Court of Justice, Ukraine aims to demonstrate violations of two international treaties, one of them the UN’s International Convention for the Suppression of the Financing of Terrorism through Russia’s active arming, manning and control over the armed conflict in Donbas.

Of no less importance are the findings of the International Criminal Court, whose jurisdiction Ukraine has accepted with respect to all events since Russia’s invasion and annexation of Crimea.  While the ICC Prosecutor determined back in November 2016 that Russia’s occupation of Crimea constitutes an international armed conflict, falling within its jurisdiction, the Prosecutor’s Office is continuing to assess the situation in Donbas before deciding whether this can be qualified as an international armed conflict.

The sighting by the OSCE’s sophisticated equipment of an anti-aircraft gun, armed personnel carrier and other military hardware clearly being transported by night, and on dirt roads leading to and from the Russian Federation and away from official border crossings, give a much more convincing explanation for the Donbas militants’ stockpile, one that contradicts Russia’s repeated attempts to present the fighting in Donbas as a ‘civil war’ (or in the ICC’s terms, a ‘non-international armed conflict’)  There is no reason for such night-time movements of large numbers of trucks unless they are carrying weapons, ammunition and other direct evidence that Russia is a direct party to the conflict in Donbas.