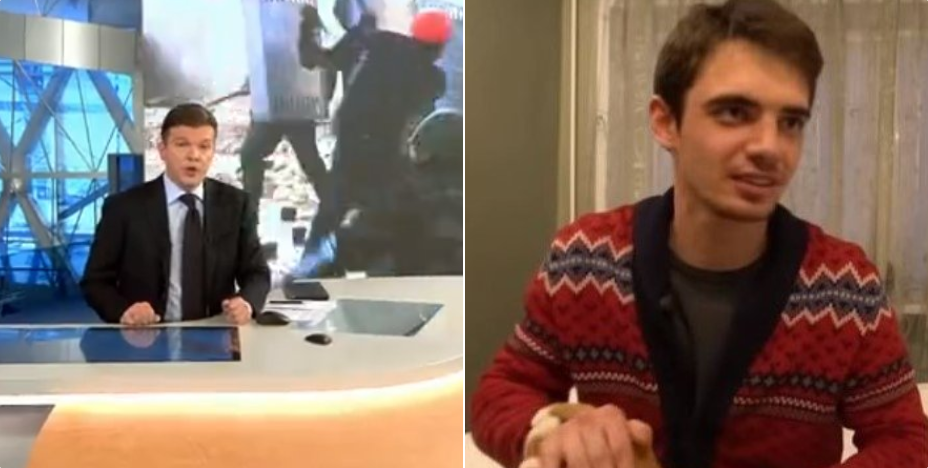 Russia’s Pyervy Kanal [Channel 1] marked the anniversary of Ukraine’s Revolution of Dignity [Euromaidan] on 21 November with a program aimed at proving that Euromaidan had brought only hardship and suffering to Ukraine, and that Kyiv is trying to attribute its problems to “Russia’s mythical aggression”.  The message, format and manipulative methods used were all quite standard, only this time there was a bleep.  The channel’s ‘disillusioned and shivering former Maidan activist’, finding warmth only from hugging his cat, was exposed as a perfectly comfortable Belarusian from Minsk.

Having been named and exposed as a liar, the fake Ukrainian, whose real name is Vitaly Yurchenko, expressed “boundless shame” for his part in the deception.  He claimed, in an interview to the Belarusian publication ‘Nasha Niva’, that he had simply been commissioned by Pyervy Kanal, because the latter’s ‘real interview’ had arrived with bad sound quality.  He even asserted, with minimum credibility, that he had not taken part in the fake for money.  Since then the channel itself has tried to deny responsibility, claiming that ‘stringers’, or freelance journalists, were involved.

It is largely immaterial whether the channel looked for the required “disillusioned and freezing Maidan activist’ themselves, or simply commissioned such a persona.  This was no news feature, but a 10-minute exercise in propaganda aimed at pushing the line that Ukrainians were deceived five years ago and are disgruntled now, with nothing to show for their protests but cold flats.  That, at least, is the most harmless part of the propaganda exercise in which the presenter quite overtly links Euromaidan to the war in Donbas, talking of it having sent over “10 thousand people, mainly civilians, to their graves”, forced a huge nation “to speak in a language that is not their native tongue” and believe in “nonsense”, which, he claims, includes Nazi swastikas and hatred to Russians.  It is that hatred, he goes on to assert, which is the critical component.

The program should serve as a deterrent to any Ukrainians or others who still believe there can be sense in trying to counter the propaganda from within by telling the truth on such programs, The words spoken by a genuine Ukrainian about the need to continue and complete the Maidan reforms “once we win this war and Russia stops its aggression” are immediately taken up and used manipulatively.  The presenter jumps in claiming that even those who still hold to the ideas of Maidan use what he calls “the mythical Russian aggression” as the explanation for all that’s wrong in Ukraine.  This, he asserts, explains who has an interest in not ending the war in Donbas.

The stream of lies, many toxic, is long before the camera zooms in on an alleged former Maidan activist, given the name “Kyril Chubenko’ and his cat.  He says that “Euromaidan has personally given him nothing”, and complains about the lack of warmth, the price of energy and the uncertainty of how to “get through the winter, how to send the children to school”.

Hardly surprising that Euromaidan should have given Belarusian Vitaly Yurchenko nothing.  His remorse for having taken part in Russia’s information war is certainly warranted, but would be more convincing had it come before, not after, he was exposed, initially by a Russian blogger, Ilya Valamov..

Valamov’s follow-up to his initial report ends with a useful reminder. “”Pyervy Kanal feeds the Russian population with yeast buns and shit using public funding.  In 2017, the channel received 7,32 billion roubles from the state, and from 2018 to 2021 it will be receiving state subsidies to the tune of 6,6 billion roubles each year.”

If Yurchenko’s remorse may just be genuine, there are no grounds at all for believing that Pyervy Kanal made a genuine mistake.

On 12 July 2014, Pyervy Kanal broadcast an ‘interview’ with a woman presented as a refugee and mother of four.  She was neither, and has been seen in several propaganda stunts, however this one aroused particular outrage and revulsion.  The woman claimed to have witnessed a three-year-old boy being crucified by Ukrainian soldiers “on Lenin Square in Sloviansk”, and his mother killed because the father was a pro-Russian militant.  Even details that could be easily checked were wrong (there is no Lenin Square in Sloviansk!), making it quite impossible to believe that the presenter Yulia Chumakova was unaware of the lie that she was helping to spread.

The scandal over this story forced Pyervy Kanal to attempt some kind of excuse, but never enough for them to remove the feature, despite it being a fake from beginning to end.

This was, in fact, only one of countless such fakes on Russian television in 2014, including one occasion where two channels used the same actor for diametrically opposed roles.

In August 2015, Colta.ru spoke with three former employees of mainstream Russian channels on condition of anonymity, and with Stanislav Feofanov, who had earlier worked for REN TV.

One explained that their Chief Editor had told the staff back In February 2014 that the 1970s and 1980s had been child’s play to the cold war that was beginning and that they should leave the media now if they didn’t want to take part.  Most stayed.

One of the people told Colta.ru that the top managers of the channel had gone to meetings at the Kremlin, following which they held their own meetings with a select few.  The latter included presenters who were given instructions on the terminology to be used “’junta’, ‘fascist’, etc), as well as the subject matter.

After Russia’s invasion of Crimea, a so-called ‘referendum’ was held in March 2014, with each channel having to provide at least one story, if not more, from Crimea each day, with the accent clearly on how things were blooming and people happy to have “re-joined Russia”.

In contrast to the Russian-Georgian War, Colta’s source recounted, the system was fine-tuned and well-prepared over weeks, months and years.

The program on 21 November, 2018 makes it clear how little has changed.