Neo-Nazi Azov fighter granted Ukrainian citizenship linked with police and far-right vigilantesFar-right vigilantes imposing ‘Ukrainian order’ are strange partners for Ukraine’s National PoliceUkraine’s police must not collaborate with Azov xenophobesPolice officer accused of involvement in racist attack on football fansRacist attack on young man in KyivNo charges and racial motive denied in bloody attack on students in KharkivKharkiv attack on foreign students was no ‘mass brawl’‘There was a human being, and the body was torn apart in an instant’ — a Mariupol graduate who went through hellFirst evidence of Russian abductions, torture and forced deportation from Kozacha Lopan (Kharkiv oblast)Vovchansk Engineering Works: Dungeons on the Chechen Model‘They shot at our feet, near us, and one guy was wounded with an electric shocker...’ ‘In a panic, people abandoned their bed-ridden relatives.’ А resident of Mariupol story about how people were coerced to leave for RussiaRussia invites Steven Seagal, while blocking the Red Cross from visiting Olenivka prison after killing of 53 Ukrainian prisoners of war“I will not fear ZEvil”– digest of Russian protests‘Mariupol will still be Ukrainian’ – wife of the militaryRomani Voices From Hell: Discrimination, Epidemic, WarRussia plans total ‘filtration’ of Mariupol men and forced ‘mobilization’Russia causes irreparable damage to 16th Century Crimean Tatar Khan’s Palace in occupied Crimea Guide on the investigation of torturesStudy confirms that Russia is pouring military equipment and arms to Donbas militants
• Topics / Elections
• Topics / Law enforcement agencies 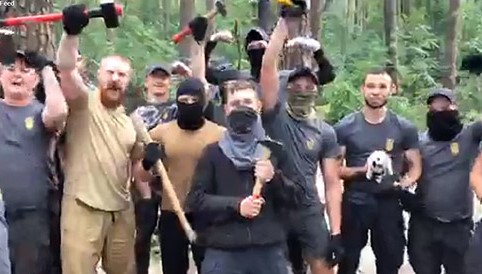 Concern about the proposed involvement of the far-right ‘National Militia’ paramilitaries as Ukrainian election observers has intensified following both their threats to use physical force “to prevent violations” and the involvement of the party they are linked with [National Corps] in violent scuffles at the weekend.

22 Ukrainian police officers , 19 badly enough to need hospitalization, on 9 March when National Corps activists tried to force their way onto a stage in Cherkasy where President Petro Poroshenko was speaking and, later, to block his cortege.  There were also scuffles outside the President’s Administration in Kyiv, with the police being by young activists wearing balaclavas.

The pretext was the political storm caused over recent weeks by a ‘Nashi Hroshi’ [‘Our Money’] report implicating Ihor Hladkovsky, the son of Oleh Hladkovsky, a close Poroshenko ally, in serious and shocking embezzlement within the defence industry after Russia’s invasion of Crimea.  Poroshenko responded to the scandal Oleh Hladkovsky from his post as First Deputy Secretary of Ukraine’s National Defence and Security Council pending the results of an investigation.

The National Corps activists appear to have been demanding the arrest and freezing of all assets of both father and son.  In principle, this is nothing new since such far-right groups have long involved themselves in battles where they present themselves as defenders of real reform of the judiciary, proper measures against corruption, etc. In this case, however, it is not at all clear that the arrest of both Oleh and Ihor Hladkovsky would be warranted, at least at this stage. That raises the question of why National Corps chose such very aggressive and violent methods on 9 March.  by the Bloc of Petro Poroshenko to suggest that oligarchs hiding out in Russia and pro-Russian elements were behind the incidents seem rather stretched. On the other hand, just weeks before the presidential elections, it cannot be excluded that the activists were covertly helping one or other political candidate by action aimed at discrediting Poroshenko and trying to provoke the police to use inappropriate force.

Some are suggesting that the events demonstrated a new battle for power, with Poroshenko supported by the SBU and Prosecutor General, and NatsDruzhyny working for the Interior Minister Arsen Avakov who is, according to this version, supporting another main candidate.  While Avakov has certainly seemed loath in the past to react adequately to the violent behaviour of  far-right activists, this time it was only police officers who suffered and the video footage available suggests that the aggression came from the activists.

The National Corps party was created in 2016 and is still led by Andriy Biletsky, whose role as the head of the Azov volunteer battalion got him elected to parliament as an independent candidate in 2014.  Biletsky has mellowed his tone considerably over recent years, but he is the former leader, first of the neo-Nazi Social-National Party, and then ‘Patriot of Ukraine’,  The latter was responsible for shocking racist attacks in Kharkiv and, according to Vyacheslav Likhachev, long-time monitor of racism and xenophobia in Ukraine, Biletksy was earlier involved in criminal activities and, probably, political technology services for members of the former ruling Party of the Regions.

The far-right, even neo-Nazi views of at very least some of the members of the Azov Battalion aroused controversy from the outset, and the concerns were largely the same with regard to the related Azov Civic Corps.  It is they who joined the National Corps in 2016, and who, in late January 2018, former so-called ‘National Militia Units’ [or natsdruzhyny from the Ukrainian національні дружини] promised to “establish Ukrainian order” on the streets of Kyiv. There was considerable alarm at their assertion that they would be acting in cooperation with Ukraine’s National Police, since National Corps has been involved in many acts of aggression or intimidation against ethnic minorities, people whose sexual orientation or political views they don’t like.  Despite the huge public concern about such paramilitary ‘druzhyny’ in their camouflage gear, their asserted role in patrolling the streets has not so far amounted to much.  Members of the ‘druzhyny’ and of National Corps have, however, been involved in several acts of violence.  On 7 June 2018, for example, both were involved in a shocking attack on a Roma settlement in Kyiv’s Holosiyivsky Park.  The National Corps even reported on Facebook that they had given the Roma residents 24 hours to leave the settlement, threatening to otherwise “clean up the rubbish”.  The authors of ‘’ note that the far-right assailants posted a video of the attack on social media in which they can be seen brandishing hammers and axes, with the Roma residents fleeing. This was deleted, however a copy can be seen at the bottom of the page . As well as anti-Roma insults during the pogrom, a leaflet was circulated that day, inciting enmity towards Roma.  In the above-mentioned report, Likhachev notes that this clearly indicates both the perpetrators’ intent (which must be proven for any prosecution under Article 161 of Ukraine’s Criminal Code on inciting enmity) and the dangerous consequences of such propaganda.

On 31 March 2018, the National Corps prevented an LGBT event in Poltava, on their Facebook page that they were against “the propaganda of the ideology of LGBT”. The statement ends by claiming that “Ukrainians have the right to counter threats which lead to the establishment of liberal dictatorship in Ukrainian society”.

These, and other incidents, already aroused concern over by the Central Election Commission on 11 January 2019 that the ‘civic organization National Militia’ had applied for and been granted permission to act as observers at the presidential elections.

Even if an organization that appears to be the paramilitary wing of the National Corp party is, officially, a ‘civic organization’, there is total lack of transparency about the source of its financing.  After its first march on 30 January 2018, questions were asked about where the money was coming from for 600 men to be dressed in identical camouflage gear and other expenses.  National Corps would say only that they had received financial support from ‘business’. Questions about such ‘business’ sources seem particularly justified in the run-up to elections.

Doubts about their suitability for acting as observers were only exacerbated by given to Radio Svoboda on 5 March by a spokesperson for National Militia, Ihor Vdovin.  He asserted that the ‘observers’ could use force at polling stations should there be vote-rigging which “law enforcement officers turn a blind eye to”.   This was a milder version of the Telegram assurances from the ‘commander’ of NatsDruzhyny, Ihor Mykhailenko who asserted that  “on Election Day we can’t do very much, but that not very much will be enough to give the Nation the opportunity to believe in its powers and to elect a new Leader of the country.  … if we have to punch somebody in the mutt for justice, we will do that, without delay”

All of this was  noted by the Central Election Commission which, on 6 March, issued in which it points to all of the above-mentioned pronouncements by NatsDruzhyny, but then goes on, in exhaustive detail to outline just why, in their assessment, they do not have any grounds for refusing to allow the alleged ‘civic organization’ from acting as observers.  CEC instead calls on the Security Service [SBU] to carry out a check of the pronouncements, and for the National Police to ensure law and order at the elections.  It also reminds observers of the need to unwaveringly adhere to the law.

The problem is that both National Corps and the NatsDruzhyny paramilitary formation with its civic organization status appear to believe that they can determine what is ‘Ukrainian order’, ‘justice’ and ‘law and order’, with the law, like the heads bashed in the process, of little concern.