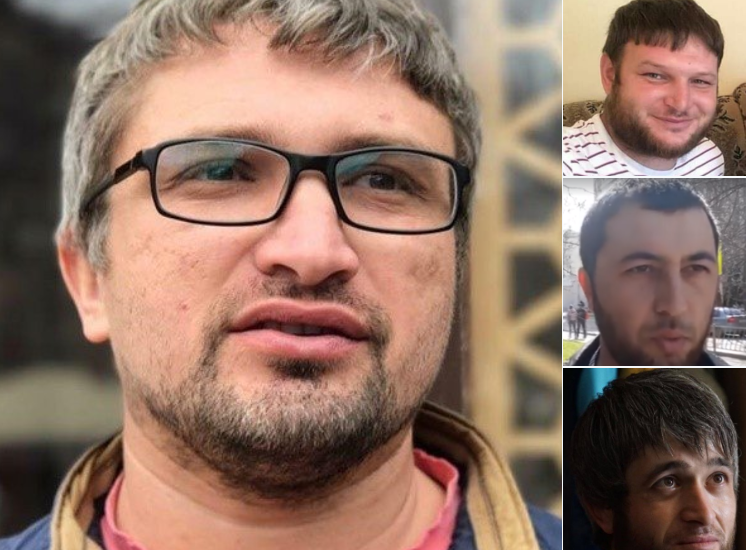 Termination of the trumped-up charges brought against Meduza journalist Ivan Golunov on 6 June was greeted as a triumph by Russian and western journalists who had leapt to his defence.  The outcome was probably also a propaganda success for Russian President Vladimir Putin whose intervention was widely believed to be behind the fact that the prosecution was so swiftly dropped.  What the case was not, despite all the upbeat noises, was some kind of turning point for Russia.   The arrest of Circassian journalist Martin Kochesoko the following day on equally suspect charges went virtually unnoticed.  The vast majority of journalists in Russia and abroad have also remained silent about the arrests and imprisonment of around 10 Ukrainian journalists / civic journalists, all but one from occupied Crimea.

If most people have at least heard of Roman Sushchenko, the Ukrainian journalist seized while visiting relatives in Moscow and sentenced to 12 years on mystery ‘spying’ charges,  the arrests of nine Crimean Tatar civic journalists have been scarcely mentioned.  This is despite the fact that all the reasons why it was imperative that colleagues stood up for Golunov apply at least as much, and probably more, in occupied Crimea.

Russia set about crushing all independent media in Crimea immediately after invasion and annexation and after the first year of its occupation, was designated by Freedom House as one of the 10 “worst of the worst” territories in the world for media freedom.  Since October 2017, the Russian occupiers have also been systematically arresting members of Civic Solidarity, the civic initiative which arose to both help political prisoners and their families, and inform about armed searches, arrests and politically motivated prosecutions. Given Russia’s efforts to silence independent media and use of state-controlled propaganda channels to present arrests in the ‘correct light’, the coverage provided by Crimean Solidarity civic journalists was clearly not something the occupation regime planned to tolerate.  The repressive measures meted out were initially for ‘administrative offences’, although included brief periods of imprisonment.  When that failed to terrorise the journalists into silence or exile, they began applying charges linked with the peaceful pan-Islamist movement Hizb ut-Tahrir. Although this movement is legal in Ukraine, and there are no grounds at all for Russia’s decision to label it ‘terrorist’, the charges enable Russia’s FSB to get men imprisoned for 10 – 20 years.

On 29 March 2017, a Crimean Tatar activist Bilyal Adilov was seized by masked men in camouflage gear from outside the Russian-controlled High Court in Simferopol, while reading a prayer for the release of political prisoners.  Lutfiye Zudiyeva, a Crimean Solidarity activist, recently recalled how it was her colleague, Osman Arifmemetov, who immediately went live on Facebook, showing a video of the men abducting Adilov.  This was very widely reported in the Ukrainian media and, Zudiyeva explains,  helped them to understand that they could use direct broadcasts on Facebook to inform people about what was happening in Crimea.

The importance of such reports cannot be overstated, and it is likely that on some occasions the publicity has saved men who would otherwise have been in physical danger.

Russia has, however, retaliated with armed searches and arrests of those supporting other political prisoners and reporting such acts of repression.  The first serious offensive against Crimean Solidarity civic journalists was on 11 October 2017, with the arrest of six men, including civic journalists and activists Marlen (Suleyman) Asanov; Timur Ibragimov and Seiran Saliyev. In 2018, Nariman Memedeminov and one of the coordinators of Crimean Solidarity, Server Mustafayev were also arrested.  None of this, nor other acts of overt intimidation, silenced Crimean Solidarity, and on 27 March 2019, 24 activists and civic journalists, most of them from Crimean Solidarity, were arrested and almost immediately taken to Russia.  Osman Arifmemetov; Remzi Bekirov; Rustem Sheikhaliev and Ruslan Suleymanov had all played a vital role in providing information about the persecution and other rights violations in occupied Crimea.

The last arrests were internationally condemned as an attack on Crimean Tatar activists.  All of the above-named men have been recognized as political prisoners by the renowned Memorial Human Rights Centre.  Only Memedeminov is facing charges based solely on three innocuous YouTube videos, two of which were posted before Russia’s invasion of Crimea.

The other men are all charged with unproven ‘involvement’ in the peaceful pan-Islamist Hizb ut-Tahrir movement which is legal in Ukraine and which is not known to have committed any act of terrorism or violence anywhere in the world.  These so-called  Hizb ut-Tahrir cases are one of Russia’s worst conveyor belts of repression, with men sentenced to 17 years or more on the basis of suspect ‘expert assessments’ and ‘secret witnesses’.  In all the trials of Ukrainian Muslims so far, the defence has totally demolished all of the ‘evidence’ presented by the prosecution, however the ‘judges’ have invariably passed the sentences demanded of them.

Remzi Bekirov had recently become an accredited journalist for the independent Russian resource Grani.Ru.  His colleagues there issued a statement on 24 May 2019, ‘In defence of Crimean journalists’.  They write:

“Crimea after annexation has turned into an information black hole. On occupied territory in Europe there are acts of repression about which the media virtually do not inform people. It is the victims of persecution themselves who are forced to carry out the main work as reporters.  Here it is impossible to separate journalism from human rights work and activism. Never-ending searches, arrests and trials on fabricated charges – it is about all of this that Crimean Tatar civic journalists inform us.  In a short period of time, they have become dazzling professionals, and they have, of course, themselves ended up under attack.”

Their invitation to colleagues to endorse their demand for the men’s release can only be extended to all those in Russia, Ukraine and abroad who believe in freedom of speech and that 20-year sentences are a horrific price to pay for telling the truth about repression in occupied Crimea.