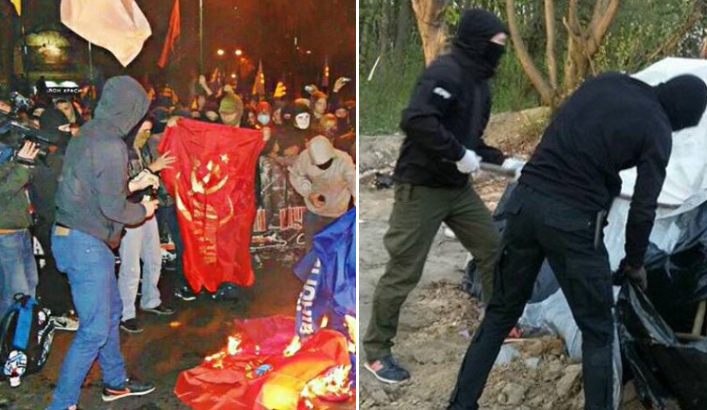 ‘C14’, a Ukrainian far-right group, considered by most experts to be neo-Nazi, has won a defamation suit against Hromadske TV over the latter’s description of it as neo-Nazi in a tweet .  Hromadske plans to appeal against this disturbing court ruling which appears to have been based more on acknowledgement that the term is insulting and damaging to C14’s ‘reputation; than on whether it was justified.

‘C14’ is repeatedly referred to as ‘neo-Nazi’ by well-known researchers into the far-right, such as Vyacheslav Likhachev, who has monitored anti-Semitism and xenophobia in Ukraine for over a decade, Anton Shekhovtsov and Andreas Umland, as well, with less authority, as by the author of these words.  The term is very frequently used in the media, however ‘C14’  chose to lodge its defamation suit in connection with a Hromadske International tweet  from 4 May 2018.  This identified the young men who had seized Rafael Lusvarghi, the Brazilian Donbas fighter found in a monastery outside Kyiv and dragged to the SBU [Ukrainian Security Service] buildings as from the “neo-Nazi group C14’.

When they are not involved in violent attacks on Roma settlements, on LGBT events or remembrance gatherings for slain victims of neo-Nazi killers, C14 activists try to present themselves as defending judicial reform, victims of Russian persecution and Ukraine in general.  During the final court hearing, for example, C14’s lawyer, Viktor Moroz, claimed that C14, which he called a civic organization, has been involved in building civil society in Ukraine and in the events in eastern Ukraine, in volunteer activities. He asserted that it has been building “a positive reputation”.

On 6 August, Judge Yulia Kartavtseva from the Kyiv Commercial Court agreed that the term ‘neo-Nazi’ used by Hromadske damaged C14’s reputation and ordered Hromadske to publish a denial, via publication of the court ruling, and to pay C14’s court duty (3,5 thousand UAH).

C14 had provided an opinion from the Kuras Institute of Political and Ethnonational Research on the terms ‘nationalism’; ‘Nazism’ and ‘neo-Nazism’.  This did, in fact, note that neo-Nazism promotes such aspects of Nazi ideology as anti-Semitism, homophobia and radical nationalism’, however the study does not appear to have focused on whether the term ‘neo-Nazi’ was legitimate with respect to C14.

Whether or not something damages an organization’s reputation, it can only be deemed defamatory if it is untrue.  Hromadske is adamant that no expert assessment was provided to prove that the term had been used unfairly.  It is difficult to imagine how such an assessment would be possible, when the above-mentioned experts in this field are unanimous in finding the term legitimate.

C14 was formed by activists who broke away from the far-right VO Svoboda party as being too moderate for them.  Its activists have long denied that the organization is neo-Nazi.  They reject attempts to see the ‘14’ in their name as the typical code for a foul white supremacist slogan (containing 14 words) by the US Nazi David Lane.  They assert that the name when written looks like Sich from the Zaporizhyan Sich, the Cossack political entity from the fifteenth to eighteenth century.  14, in turn, they link with 14 October, the day traditionally linked with the beginning of the Ukrainian Insurgent Army [UPA] in 1943.

Vyacheslav Likhachev, among others, is dismissive of C14’s attempts to deny both neo-Nazi associations in their name and other neo-Nazi links. He earlier pointed out that the C14 activists who occupied the Kyiv City Administration building covered it with neo-Nazi banners and graffiti.

It is certainly true that since Russia’s military aggression began in 2014, C14 activists have tried to present themselves as fighting ‘separatists’ and defending Ukraine, however the claim that they have been “building a positive reputation” must be disputed.

An advertisement on their Facebook, in which they offered to potential ‘donors’ services in making trouble for their enemies was removed only after it was reported in the media and here (see the screenshot).

On 19 January 2018, C14 activists prevented the traditional remembrance gathering for Sevastopol journalist Anastasia Baburova and Russian lawyer Stanislav Markelov, murdered in Moscow in 2009 by neo-Nazi Russian nationalists.  The claim that those honouring the two slain anti-fascists were ‘separatists’ was deeply offensive, and the methods used to stop the event – thuggish.

C14 activists’ claim that they are defending Ukraine must also be viewed with scepticism when they are notorious for anti-Roma and homophobic attacks, and when they show extreme intolerance to people whose behaviour they don’t like.

C14 activists were certainly involved in a vicious attack on a Roma settlement on Lysa Hora in Kyiv on 20-21 April 2018.  The police only reacted more or less adequately after a harrowing video was posted showing the thugs chasing terrified families.

Another raid on Roma citizens was carried out in October 2018, with C14 activists, together with the ‘Kyiv Municipal Watch’ civic organization which is led by C14 activist Serhiy Bondar, appearing to have the cooperation of the police.

In March 2018, C14 activists were among the far-right thugs who attacked a Kyiv Docudays Film Festival event on human rights issues. They destroyed posters promoting tolerance and diversity and tried to prevent people from attending a panel discussion on far-right movements.  Numerous LGBT events around the country have faced harassment or been positively prevented by far-right thugs, with C14 very often involved.

It should be said that, even where C14 appears to be defending a position that many other civic activists would endorse – on judicial reform, on demands for action where civic activists have been attacked, etc., their methods are often of extremely questionable legality, and sometimes overtly terrorize the courts..

All of the above and more prompted serious concern in June 2018, when it transpired that groups linked with C14 had received Ministry of Youth and Sport grants in a competition for ‘national-patriotic education projects’.

Neither Hromadske, nor others who have identified C14 as ‘neo-Nazi’, used the term without consulting experts on far-right groups in Ukraine.  There is nothing to suggest that the court in Kyiv heeded the opinion of experts like Likhachev before deciding that, since the term ‘neo-Nazi’ does tarnish C14’s reputation, that it should not be used.  If C14 next decides to object when we describe its activities as thuggish, homophobic or anti-Roma, will a Ukrainian court also determine that these are ‘defamatory’?

It is to be hoped that the court of appeal will consider more than the ruffled feelings of C14 activists.