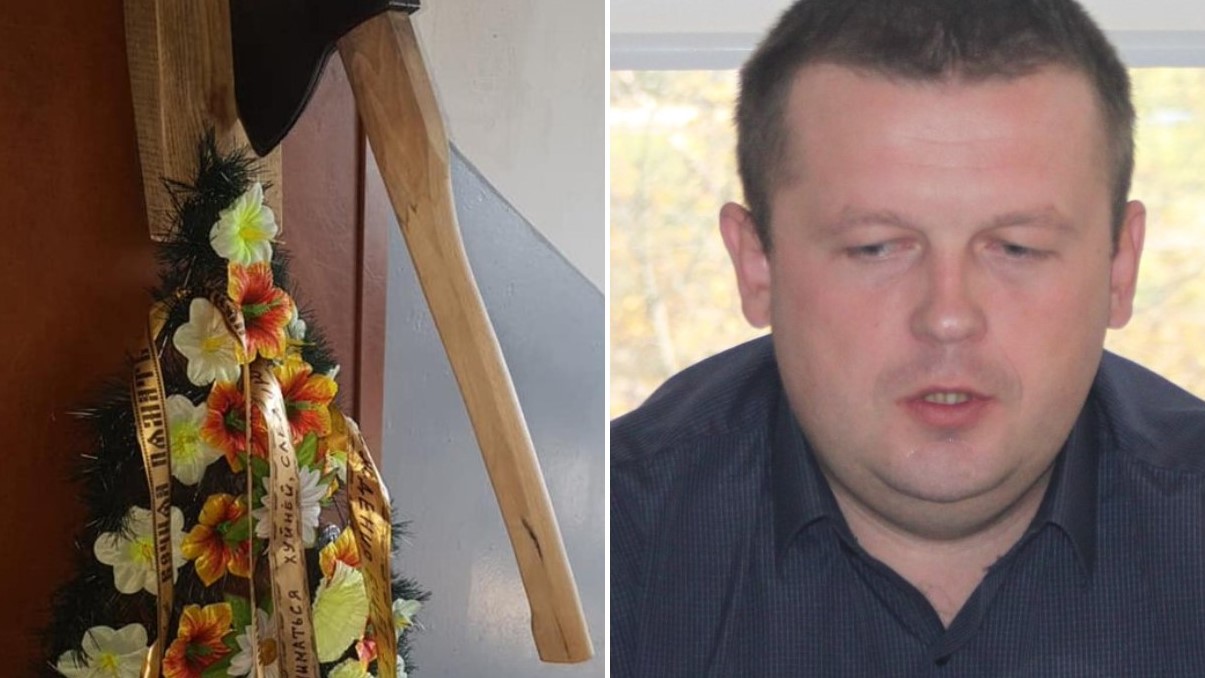 Roman Likhachov, a lawyer and head of the Chuhuiv Human Rights Group, has received a menacing ‘warning’, in the form of a coffin, funeral wreath and an axe wedged into the door of the Group’s office and his home. The ribbon on the wreath used a diminutive form of his first name, and said that “if you don’t stop doing stupid things, the next [axe] will be in your head”.

Likhachov assumes that these threats are linked with the work of the Network of Anti-Corruption Centres which he is involved with.  The Network has recently been very actively investigating business setups for tax evasion in Chuhuiv which they believe to be under the protection of the authorities and law enforcement bodies, as well as for selling alcohol without a licence in a local café (‘Black Pearl’).  The latter are linked with a member of the Chuhuiv City Council, Ruslan Ovcharenko.

The unwelcome visitation is believed to have been around 2 a.m. during the night into 26 August.  The police have been called and are carrying out an investigation.

Likhachov is not hopeful that they will find the culprits, and points out that Mykola Bychko, another activist from the Kharkiv oblast, had also received such ‘warnings’. Likhachov was one of the first people to publicly reject the police treatment of Bychko’s death as suicide, and he now drily informs the police and prosecutor’s office that he has no intention of committing suicide.

23-year-old Mykola Bychko was an environmental activist from Eskhar (Kharkiv oblast). His body was found hanging from a tree in June 2018, with the police and prosecutor’s swift conclusion that he had committed suicide rejected both by local residents who knew the young man and human rights activists.  On 7 June, two days after Bychko’s body was found, around 200 Eskhar residents took part in a march, blocking the road, to the prosecutor’s office and police department in neighbouring Chuhuiv. Representatives of the Chuhuiv prosecutor’s office came out to meet them, and were taken by the crowd to the place where Bychko’s body was found.  The enforcement officers were forced to agree to carry out a repeat examination of the circumstances of his death.  That investigation seemed extremely inadequate, and was then quietly terminated at the very end of 2018.

Bychko had actively fought against corruption and the pollution of the local reservoir by AVA  Services 2017, a very new private company partly owned by Serhiy Lehkosherst, whose brother, Anatoly was the Mayor of Eskhar.  For around a year, industrial waste had been going into the sewage system, with Bychko and other local residents angered by the pollution this was causing.   They linked the problems to the fact that the municipal authorities had signed three contracts worth over half a million UAH with AVA Services 2017.  It was under pressure from Eskhar residents, who did not believe the official story about Bychko’s death, that the Mayor handed in his resignation, as did his deputy and the head of communal services.

Bychko had been following what was going on around the treatment equipment and taking water samples from the reservoir. It was for this purpose that he had cycled to a site on the reservoir to collect a water sample on 4 June 2018.  His mother reported that he was missing the following day, and the police soon found his body, hanging from a tree, in the forest, two kilometres from the water treatment tanks, with his bike and a bottle of war nearby.

In fact, one of the numerous reasons why human rights activists do not believe such police claims is the shocking failure to carry out a proper assessment even of the site where Bychko’s body was found.  Likhachov said immediately that virtually no investigative activities had been carried out during the first month at all, with it taking almost that long to even send the documents for an expert assessment to be carried out.  The investigators from the Chuhuiv Police Station  did not even remove the rope on which Bychko was found hanging, and simply cut off a piece of it.  The upper part of it was left at the site, although it was this part that needed to be examined for any evidence suggesting that others had been involved.  Later the rope simply disappeared, and an attempt was made to set the bark of that particular tree alight.

The Kharkiv Regional Prosecutor’s Office found that there had been infringements of criminal procedure legislation and said that disciplinary proceedings would be brought.  Even if they were, and there is no proof, this did not alter the fact that important time and, conceivably, critically important evidence had been lost, despite warnings of the danger of this at the time.  There were other worrying developments that made it imperative that an independent investigation was carried out. As of yet, that does not seem to have happened.