Russia moves to dissolve Memorial NGOs that defend political prisoners and expose Russian aggression against Ukraine Russia claims that by naming its political prisoners, Memorial is ‘justifying terrorism’ Same notorious ‘experts’ used against Memorial as in Russia’s persecution of Yury Dmitriev, Pussy Riot & Jehovah’s WitnessesCourt blocks exposure of fake experts in Russia’s attempt to dissolve Memorial Human Rights Centre as "extremist"Defender of Russia’s Ukrainian political prisoners jailed and fined for picket against attempt to destroy Memorial The KHPG receives half of Memorial’s Nobel, and will give the money to the victims of Russia’s invasion of Ukraine‘Stand up for your convictions, even if you stand alone!’ Anti-war activities in Russia, 3-9 OctoberRussian invaders destroy Memorial to Victims of Holodomor in Mariupol Hours after Memorial receives Nobel Peace Prize, Russia seizes its property for supposed ‘destructive activities’ Russian occupation means 14-year sentences for being Ukrainian and refusing to ‘confess’ to insane charges We are Russian citizens and are ashamed of the actions committed in our country’s name.Fascism is here in Russia. Anti-war activities in Russia, 15-22 AugustRussia seeks 15-17 sentences against Crimean Tatar civic journalists who reported repression in occupied Crimea “He lay on the sidewalk, naming towns and cities in Ukraine”. A digest of anti-war activities in Russia, 23-29 July2,500 kms on Foot to Protest against the War. Anti-war Activities in Russia, 17-26 July 2022Patterns of Resistance are changing. A Digest of Protests in Russia (17-24 June 2022) Chuvashia is Angry: A Bracelet for every 500 roubles. Digest of Russian protests (11-16 June 2022)“We’re not celebrating today” – digest of Russian protests (early June 2022)ECHR rules too late against Russia’s notorious ‘foreign agent’ law and hardly moves over violations in occupied Crimea “Fight poverty, not Ukraine” – digest of Russian protests
• Topics / News from the CIS countries 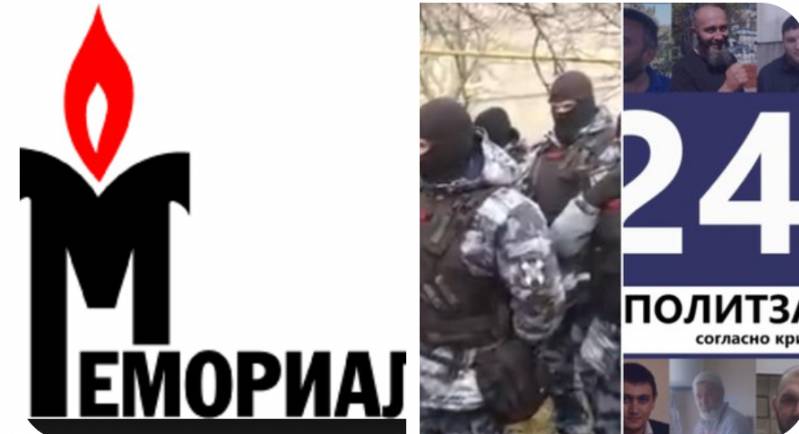 A wave of exorbitant fines against the International Memorial Society and Memorial Human Rights Centre have placed the very existence of these two organizations which are of vital importance for Ukraine, as well as Russia, in question.  They have been forced to ask for donations to help pay millions of roubles in fines imposed in connection with Russia’s repressive ‘law on so-called ‘foreign agents’.

Memorial’s activities in uncovering the truth about Soviet repression, as well as in reporting political repression and other human rights abuses in Russia and occupied Crimea have long brought them into conflict with the current regime under Russian President Vladimir Putin.

The first major attack was on Memorial in St. Petersburg in 2008, when the organization’s entire archive of vital historical information and documents were seized and only returned some 6 months and many court cases later.  Virtually, if not all, branches of Memorial have by now been forcibly entered on Russia’s notorious list of ‘foreign agents’.  It was noticeable that when, on 4 October 2016, Russia’s Justice Ministry declared the renowned International Memorial Society a ‘foreign agent’, one of the four reasons cited was the fact that Memorial had publicly called Russia’s actions in the East of Ukraine military aggression.

An open attempt in 2014 by the Justice Ministry to have Memorial Society forcibly dissolved caused international outrage, which may possibly have been the reasons why the authorities backed off.

In fact, the ‘foreign agent’ law is equally a weapon against human rights NGOs and civil society in general.  Being placed on the list as receiving money from abroad (without which NGOs can seldom exist) entails all forms of rigid scrutiny and restrictions, and requires the NGO to label all material, including on the Internet as produced by a so-called ‘foreign agent’.

It is over the lack of such labels on social media pages, Twitter, etc., that the International Memorial Society, and Memorial HRC have received massive fines. On 16 December, a court in Moscow fined the Head of the International Memorial Society Board, Yan Rachinsky 200 thousand roubles over the lack of the ‘foreign agent’ label on the Society’s YouTube channel and VKontakte page, and Alexander Cherkasov, Head of the Memorial Human Rights Centre a further 100 thousand for the same thing on Twitter.  Rachinski told the newspaper Vedomosti that, as of 17 December, Russia’s effective censor, Roskomnadzor had drawn up protocols over such supposed ‘offences’ to the tune of 5.5 million roubles, with courts so far having  imposed fines of up to three million roubles.

While the fines are not obviously from a centralized body, when asked about the situation, Putin’s press secretary Dmitry Peskov only commented that the Kremlin is not following criticisms about Memorial.  This, Vedomosti notes, could well be interpreted at local level as a carte blanche to make new complaints against the organization.

At present, Memorial’s collection has raised 1.5 million roubles.  It is certainly galling that money so urgently needed for the NGOs’ work should have to be spent on such fines.  The alternative, however - one that the authorities are probably aiming at - is that Memorial can be forced to terminate their activities.  This would be nothing short of catastrophic.  It is thanks to Memorial that Russians, Ukrainians and others know about the fate of their relatives, and in general about the darkest days of Soviet repression.  It is this knowledge which is systematically being concealed and distorted by the current regime.  The wish to crush Memorial and those who dare speak the truth about Joseph Stalin and the Terror have led to the persecution of historians, most notably the continued arrest on grotesque charges of historian and Karelian Memorial Head, Yuri Dmitriev, the persecution of Perm Memorial and systematic attempts to use state-controlled and Kremlin-loyal media to discredit Memorial and figures like Dmitriev.

Memorial Human Rights Centre has played an invaluable role in highlighting human rights abuses in Chechnya and the Northern Caucuses in general.  Since Russia’s invasion and annexation of Crimea in 2014, Memorial HRC has provided important studies of the politically-motivated persecution of Crimean Tatars and other Ukrainians illegally imprisoned in Crimea or Russia, and has not been afraid to recognize the Kremlin’s hostages as political prisoners.  Memorial’s in-depth knowledge and its authoritative voice have always been heard even when international human right NGOs have been slow to react.  It was Memorial’s testimony that exposed all of the lies used in the abduction, savage torture and ‘trial’ of Ukrainian political prisoners Mykola Karpyuk and Stanislav Klykh.  Memorial HRC reacted almost immediately after the arrest in Crimea of 24 Crimean Tatar civic activists and journalists, as well as after Russia attacked three Ukrainian naval boats near Crimea and seized 24 POWs.  It has never been afraid to spell out that Russia is violating international law by applying its legislation and imprisoning people on occupied territory, and such honesty is doubtless one of the reasons for the Russian authorities’ relentless attack on it.

It is absolutely vital that every effort is made to ensure that it survives this present attack.

Donations can be made here https://donate.memo.ru/