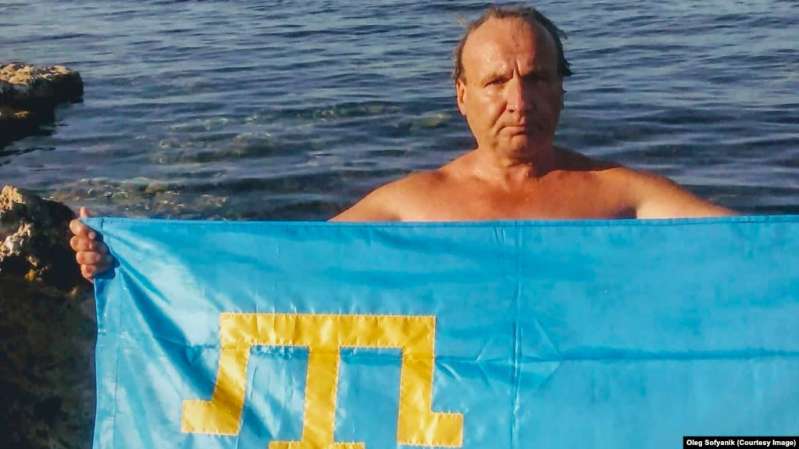 Marathon swimmer Oleh Sofianyk has been summoned to a psychiatric hospital in occupied Sevastopol, and told that if he doesn’t go voluntarily, he could be taken by force and held there permanently.  This new move by the Russian occupation regime comes just months after Sofianyk was detained at the administrative border, almost certainly in connection with his marathon swim with a Crimean Tatar flag to mark the 75th anniversary of Stalin’s Deportation of the Crimean Tatar people.

As a schoolboy, Sofianyk got into trouble with the Soviet regime for his involvement in a young people’s ‘committee of fighters for freedom’.  40 years later, the methods, including punitive psychiatry, have not radically changed, but they are applied by the Russians illegally occupying Crimea.

On 11 February, Sofianyk told Krym.Realii that, back in Soviet times, he had been placed in a psychiatric hospital for circulating leaflets; for trying to flee from the USSR; and for his rejection of Soviet citizenship.  “I was freed in 1988 and after that nobody touched me.  Now, after 30 years, I was phoned from a psychiatric hospital and told that I must come. I asked, “What if I don’t come?”.  I was told, “We will mark you out, bring you here with the police, and you’ll be here for life.  You haven’t got any relatives, and nobody will collect you”.

Sofianyk is convinced that it is the Russian FSB [security service] that is behind this. He notes that the phone call was to a mobile which is registered in somebody else’s name.  If the hospital hadn’t got the information from the FSB, they would have rung on the phone registered in his name, or his old landline.  The FSB in Sevastopol have nothing else to do, he adds, saying that there are no longer any activists.

This may be an exaggeration, however one Ukrainian activist, Yevhen Karakashev is serving a politically-motivated 6-year sentence, and a number of others have been effectively driven from Crimea through physical attacks and overt threats of persecution.

Sofianyk has no intention of going to the psychiatric hospital, and risking being held there.  He plans to leave Crimea, and says he will appeal to President Volodymyr Zelensky for help.

Sofianyk is known beyond Ukraine and has taken part in many marathons.  This is not the first time he has run into problems under Russian occupation.  In July 2015, he decided to remain in mainland Ukraine after being summoned for interrogation about political prisoner Yuri Ilchenko, and receiving a message that made it clear that he was also facing arrest.

Sofianyk had never made any secret of his opposition to Russia’s annexation of his native Crimea.  He had faced FSB harassment, and FSB questioning as to why he hadn’t take Russian citizenship, however had wanted to remain.  He explained to Censor.net that he had been monitoring rights abuses in Crimea, and that this was important since others were either imprisoned or had left Crimea.  Sofyanyk did not pull any punches, calling Russia a vile regime and the FSB a criminal – political gang.  It is not clear when Sofianyk returned to Sevastopol.  He may possibly have decided that he was well-known enough for the Russian occupation regime to avoid overtly repressive measures.  This was the case with the Soviet regime, and one of the reasons that they began applying punitive psychiatry.  Instead of openly punishing people for their dissident views, they came up with psychiatric ‘diagnoses’ and imprisoned them in equally prison-like ‘hospitals’.

On 20 April 2019, Sofianyk swam his first marathon in memory of the victims of the 1944 Deportation of the entire Crimean Tatar people (recognized by Ukraine as an act of genocide).   In October 2019, he swam 30 kilometres in 10 hours from Lukull Cape in the west of Crimea to Omega Bay in Sevastopol also to mark the 75th anniversary of the Deportation and to remind the world of the tragedy of the Crimean Tatar people.

He had planned to swim a huge marathon from Crimea to Turkey in August 2019, but decided against this as he did not wish to violate Ukraine’s territorial borders.  According to Ukrainian law, Crimea must be entered or left via a Ukrainian port.  Sofianyk said then that he was planning a huge (650 kilometre) marathon in 2020 through the Black Sea from Odesa to Istanbul.