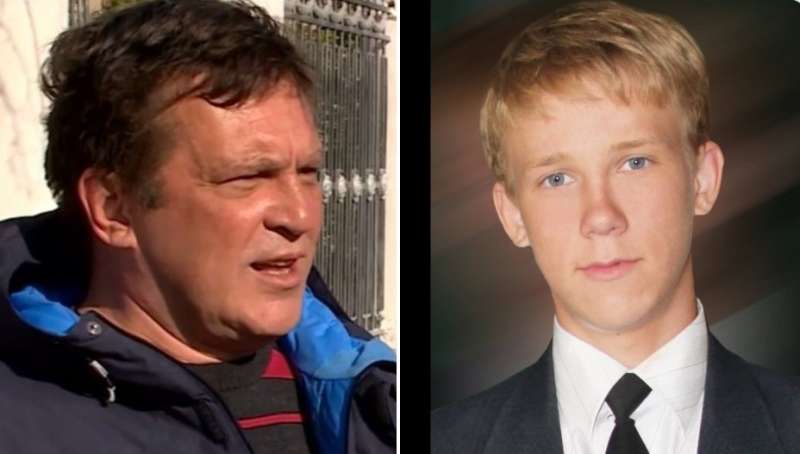 Vadim Pogodin, the former Donbas fighter who ordered and took part in the torture and killing of 16-year-old Stepan Chubenko in July 2014, is once again working for Moscow, although this time it’s in occupied Crimea, and without killings.  Pogodin has now become the deputy director of the ‘Technologies and Restoration’ company and is getting money from the occupation authorities in Crimea and the Moscow government for repairs to streets, stairs, etc. in Crimea.

Russia is fully aware that Pogodin faces a life sentence in Ukraine for the torture and murder in cold blood of a child, and that even in the so-called ‘Donetsk people’s republic’ [DPR], they concluded that Pogodin and two other men were guilty of murder.  He was even arrested briefly in Crimea on 20 June 2017, seemingly on the basis of an Interpol Red Notice, issued at Ukraine’s request.

The move aroused panic among other militants, although it soon transpired that they had no need to worry.  It is still unclear whether somebody was trying to teach 45-year-old Pogodin a lesson, or whether this was a jeering statement to Ukraine.  .

It certainly was a statement.  Pogodin had been the commander of the so-called Kerch Battalion, one of the numerous illegal armed formations effectively controlled by Russia. It was not, however, for fighting against Ukraine that the Ukrainian prosecutor had placed him on the wanted list, but for the savage torture and murder of a defenceless young schoolboy.  Since Pogodin is Ukrainian, there was nothing, in principle, to stop his extradition.

It turned out that a regime which is imprisoning 65 Crimean Tatars and has sentenced some for up to 20 years without any crime, found nothing wrong with murdering a child.  Presumably if we are talking about a Ukrainian child with strongly pro-Ukrainian views.

Nothing was said so openly, but the application for Pogodin’s extradition was rejected, and Pogodin released.

Stepan Chubenko was just 16 when the militants in Donetsk grabbed him because of ribbons in the colours of the Ukrainian flag on his rucksack, and a scarf of the Karpaty football club that he supported. According to his mother, Stalina Chubenko, it was Euromaidan that prompted her son to look at life differently, and to perceive the propaganda on television that his parents had yet to fully recognize.

When the fighting began in Donbas, Stepan’s pro-Ukrainian stand was clear and unwavering. “He was totally for Ukraine, for its territorial integrity. This was very dangerous with Russian and pro-Russian militants swarming the Donetsk oblast, and initially they sent him to stay with his maternal grandfather in Russia.  When he learned that bombs were falling, Stepan insisted on returning to Ukraine, telling parents that he couldn’t sit in the rear like a rat when his parents and his country were in danger.

Kramatorsk was seized soon after Russian ‘former’ military intelligence officer Igor Girkin and his heavily-armed men took control of neighbouring Sloviansk.  It was after Kramatorsk was liberated in early July that his parents decided that it was safe for him to return (from Kyiv). Donetsk, however, was by then occupied, and Stepan was seized on 23 July, as he passed through the city

His parents became anxious after he stopped answering their calls and set off for militant-controlled territory in search of him.  They met with Alexander Zakharchenko, then the official leader of ‘DPR’, who promised to find out what had happened.  He told them the next day that their son had been killed.

Presumably because of the Chubenkos’ personal appeal and, possibly, the fact that Stepan’s mother has Russian roots, Zakharchenko initiated a criminal investigation over Stepan’s murder and one of the three men believed to have been involved – Yury Moskalev – was taken into custody. Moskalev served a short sentence then fled to Russia. Stepan’s mother Stalina Chubenko has learned that Moskalev was detained in 2016 on an INTERPOL red notice, however Russia did not hand him over to Ukraine.

There is one other possible reason for Russia’s behaviour, namely that it is not so much protecting Pogodin, as protecting itself.  Pogodin might have been able to give too much inconvenient information, probably including details about the downing by a Russian BUK missile of the Malaysian airliner MH17 over militant-controlled Donbas on 17 July, 2014.  Although there is nothing to directly link Pogodin with this clear war crime, he does have links with Sergei Dubinsky, the Russian military man known as ‘Khmury’ whose voice was intercepted by the Ukrainian Security Service and who is believed to have been directly involved in transporting the Russian Buk surface-to-air missile system which killed 298 passengers.  Dubinsky is one of four men, three of whom are Russian current or former FSB or military intelligence officers, who is now on trial, in his absence, at the Hague.  Russia has gone to huge lengths to get another key witness / suspect, Volodymyr Chemakh out of Ukraine, and it would likely have been worried about what Pogodin could reveal if he were extradited.