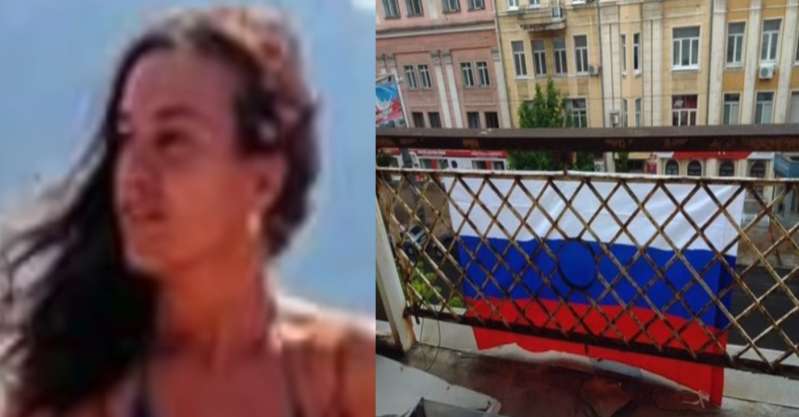 Yevhenia Yepes-Vinuesa, a Ukrainian living in Spain, has been taken prisoner in the self-proclaimed ‘Donetsk people’s republic’ [DPR], probably in response to her removing the Russian flag which the militants had hung from the balcony of her private apartment.

Yepes-Vinuesa is married to a Spanish citizen, whom she met in her native Donetsk when he was studying there in the 1990s.  She has long lived in Spain and reportedly has permanent residency in that country, although seemingly not Spanish citizenship.

She arrived in Donetsk in December 2019 to visit relatives, and was staying in her own apartment in the centre of the city.  It is not clear when she had planned to leave, but was unable to do so because of the pandemic and blocking of all checkpoints to government-controlled Ukraine.

Given that there is no acknowledgement even that Yepes-Vinuesa has been detained, it is impossible to say with certainty what the reason was.  Ukrainian journalist Denis Kazansky has, however, spoken with Yevhenia’s husband, Hannibal Yepes-Vinuesa, who says his wife immediately assumed that the men banging at the door of the apartment had come because of the Russian flag she removed.  Kazansky shows images of apartment blocks in the centre of Donetsk with Russian flags over each balcony, aimed clearly at demonstrating the Russian proxy ‘republic’s’ support for Russia.  The residents themselves, however, were not asked their opinion, and since Yepes-Vinuesa saw no reason for a Russian flag in Ukrainian Donetsk, she took it down from the balcony which is, after all, her private property.

It is possible that the so-called ‘DPR ministry of state security’ was already watching her, but the removal of the flag would, in itself, have been enough in occupied Donbas to get a person into trouble.  Armed men arrived at her door the following day, 3 June, threatening to break it down if she did not open.  Her husband explains that she called him when they arrived, and that she was still on the phone when she opened the door, but that contact was lost within minutes after that, and the phone is now switched off.  He has spoken with two neighbours, one of whom saw her being taken away by men from the so-called ‘DPR ministry of state security’.  Ostro.org reports that Hannibal Yepes-Vinuesa also phoned the Donetsk people who denied any knowledge of his wife’s whereabouts.

Very many Ukrainians have been taken prisoner in the self-styled ‘Donetsk and Luhansk people’s republics’ for having made clear their support for Ukraine and lack of such for the pseudo ‘republics’.  In virtually all cases, months have often gone by before the militants even confirmed that they were holding a person.  In some cases, such as that of Ukrainian sports champion Oleh Shevandin, the militants have been silent for almost five years.  Both men and women are generally tortured, with methods including beatings, electric shocks and degrees of asphyxiation.

All of this makes it vital that the Spanish authorities and the EU respond to Yepes-Vinuesa’s abduction and demand her immediate release.

There are over 200 civilian hostages and POWs held prisoner in appalling conditions, often subjected to torture, and international pressure is equally needed to secure their release.

The following are just some of the very many hostages

Donbas militants ‘allowed to torture 500 innocent Ukrainians to death, to find one spy’