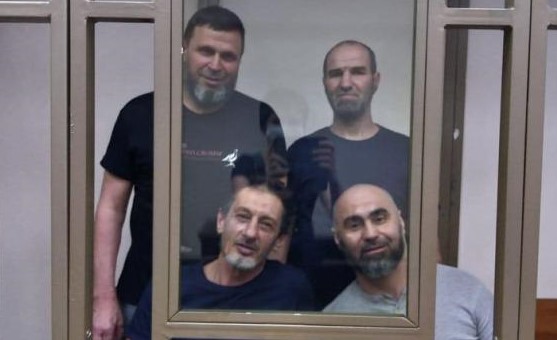 The renowned Memorial Human Rights Centre has condemned Russia’s persecution of four Crimean Tatars, including the head of an independent religious community in Alushta, and has declared all four men to be political prisoners.  The charges against at least two of the men are particularly unconvincing as they coincide with a systematic offensive against the ‘Alushta’ religious community, aimed in part at seizing control over the 19th century mosque which was legally transferred to the community almost 30 years ago.

Memorial HRC writes that the four men from Alushta: Lenur Khalilov; Ruslan Mesutov; Ruslan Nagayev and Eldar Kantimirov are charged under Russia’s terrorism articles, without actually being accused of terrorism and are imprisoned for the “non-violent exercising of their right to freedom of conscience, religion and association”.

The men were arrested as part of a series of nine armed searches and arrests on 10 June 2019 in three different parts of Crimea.  The arrests that day were the FSB’s first major ‘operation’ after the mass arrests of Crimean Tatar civic journalists and activists on 27 March 2019.  The international condemnation aroused by such flagrant targeting of civic activists probably prompted Russia to slightly modify its approach.  With the arrests since 10 June 2019 more dispersed, even geographically, it is harder to keep track of individual victims of what has become the FSB’s ‘conveyor belt of repression’.   A father and son were targeted that day, as was Eskender Suleymanov, the brother of imprisoned civic journalist Ruslan Suleymanov.  Those tragic scenes, and the fact that an officer pulled a gun on Suleymanov’s elderly mother, saying they’d have time to shoot them all, meant that the four men from Alushta largely remained names.  They are now on trial in Rostov on Don (Russia) on the same flawed charges as those which Russia is increasingly using against civic journalists, activists and those viewed by the Kremlin-loyal muftiat (or Spiritual Directorate of Muslims of Crimea) as religious ‘dissidents’.

The men are indeed charged under terrorist legislation, without any terrorism or in fact without being charged with any internationally recognized crime.  As in all such cases, the men are accused merely of unproven ‘involvement’ in Hizb ut-Tahrir, a peaceful transnational movement which is legal in Ukraine. Russia has never explained why, in 2003, it declared a movement that is not known to have committed acts of terrorism or violence anywhere in the world ‘terrorist’.  In this case, Lenur Khalilov and Ruslan Mesutov are charged with the more serious ‘organizer’ role under Article 205.5 § 1 of Russia’s criminal code, with this carrying a likely sentence of 19-20 years.  Eldar Kantimirov and Ruslan Nagayev are charged with ‘involvement in such an alleged ‘group’ (Article 205.5 § 2, with the sentences also between 10 and 20 years.).  They are also charged, under Article 278, with ‘planning to violently seize power’.  This additional charge is believed by Memorial HRC to be generally used against people who refuse to ‘cooperate’ with the investigators (which all Crimeans in these cases have refused to do).

The entire ‘case’ against them appears to be based on illicit tapes of conversations which FSB-loyal ‘experts’ assess as required.

Memorial points are that “the Crimean Muslims are guilty only of being participants in religious organizations” and their persecution is in breach of Russia’s Constitution which guarantees freedom of conscience.

The men also supported other political prisoners and their families and Memorial notes that “the convenient and customary accusation of involvement in Hizb ut-Tahrir has become a weapon for crushing solidarity movements in Crimea”.

As mentioned, this case is especially shocking in that the persecution of at least two men – Khalilov (who is the Head of the ‘Alushta’ religious community) and Mesutov – appears to be linked with the general offensive against ‘Alushta’.  So too was the arrest and horrific 19-year sentence against Muslim Aliev, a recognized political prisoner and Amnesty International prisoner of conscience.

This religious community has long been in conflict with the Muftiat essentially only because it is viewed as too independent, and probably because the Muftiat wanted control of the Yukhany-Dzhami Mosque, which has legally been in the hands of the community since 1994.  In 2017, the occupation regime revoked the community’s ownership with Russian-controlled or Russian courts, right up to the Supreme Court upholding this illegal ruling.

Khalilov’s lawyer, Refat Yunus, has told Krym.Realii that his client is convinced that his arrest and the charges are directly linked with his religious activities, and with disputes over the mosque and the land it is on. It is telling that none of the material in the case even mentions the fact that Khalilov is the head of ‘Alushta’.

Mesutov has also given details of the conflict between the muftiat and the local community. He asserts that, after the current Mufti Emirali Ablayev, was almost voted out in a vote which Imams of different mosques took part in, the system of voting was changed.  Imams were now to be chosen by the Muftiat, meaning that the makeup of the Muftiat would be voted on by Imams whom the Muftiat had itself chosen.

Mesutov went on to explain that the situation where the Muftiat had huge control suited its members, but also the occupation regime which used the Muftiat to dictate which Muslims were ‘correct’, and which were ‘dissidents’.  It was the task of the Muftiat, Mesutov said, to conceal this from Muslims, but it was also this that caused the conflict between the ‘Alushta’ community and the Muftiat.

Lawyer Lilya Hemedzhy sees the arrest of Lenur Khalilov as part of the pressure on the owners and members of the ‘Alushta’ community.  She believes that the Muftiat are trying to establish their control so that the ‘Alushta’ community toe the line and don’t express dissident views. She suggests that the Muftiat are using Russian state bodies, so as to not taint themselves before believers, and notes that six months ago the mosque was cut off from electricity despite there being a contract for energy in place.

There have been accusations for several years now that the Mufti and his people are helping the Russian FSB to persecute Muslim ‘dissidents’, with this only one of several examples.