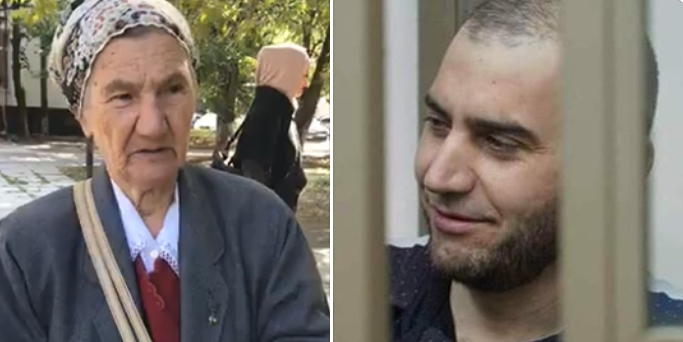 Dilyara Alieva remembers virtually every minute of the terrible day in 1944 when the Soviet NKVD burst into the homes of her family and all other Crimean Tatars and drove them from their homeland.  Nor will she ever forget how, 72 years later, Russia’s FSB burst into her son Muslim Aliev’s home, waving machine guns and forcing him to the floor in front of his terrified children.  It was genocide in 1944, she says, and genocide and unrelenting repression now.  Muslim Aliev is recognized by numerous human rights groups, including Amnesty International, as a prisoner of conscience.  Russia is ignoring that, as it is the demands from the UN General Assembly and numerous international bodies for his release.  Without greater pressure from the international community, 83-year-old Dilyara Alieva fears that, like her husband who died last year, she too will not live to embrace her son again.

One of the images that most epitomizes the brutal repression that Russia has brought to Crimea is that of Dilyara Alieva and her 7-year-old grandson, Seydali, standing outside the Russian-controlled ‘courts’ with placards reading ‘Justice, humanity, freedom”.  It was doubtless because of the discomfort that this caused those ‘judges’ who had set aside both justice and humanity, that the court hearings in occupied Crimea were increasingly held behind closed doors.

Outside one such hearing, Dilyara Alieva explained that “all people on this earth have the same rights, all of them.  You must not denigrate a person’s human dignity.  There is nothing more important, more valued than a human being.  Yet what is going on here?  What are they turning people into?”

Both she and Muslim’s wife, Nadzhiye were clear that the courts were closed in part because the judges were afraid of such words.  While the FSB stopped short of persecuting Aliev’s elderly parents, they had no such qualms about his eldest daughter Gulsum, who was active in the Crimean Solidarity civic initiative which arose after the arrests in February 2016.   Aliev’s youngest child, Seidali was 7 and deeply traumatized when the FSB first burst into their home.  He was 9 when they repeated the intrusion over an innocuous image that his sister had reposted on Facebook.

Dilyara Alieva, her husband and their two sons, Emir and Muslim, first tried to return to Crimea in 1975, but, like most other Crimean Tatars, were only able to come home towards the end of the Soviet regime or after Ukraine gained independence.

Muslim Aliev, born in 1971, worked in several jobs  to care for his four children, one of whom had serious health issues and needed expensive medical care.  From 2005, however, he played a very active role in the ‘Alushta’ Muslim Community and, at the request of the community, often led Friday prayers and delivered sermons.  He was regularly invited to organize burials and ritual prayers, as well as to administer weddings.  The Community’s independence had brought it into conflict on many occasions with the Muftiate and Aliev’s wife, Nadzhiye, believes that this was the reason for his arrest.

While the conflict may pre-date Russia’s invasion and annexation, it was the decision by the Mufti of Crimea, Emirali Ablaev in 2014 to begin collaborating with the occupation regime, that was to be fateful for Aliev and for many other Muslims.  Ablaev’s reward for his loyalty to Moscow was ‘official status’ in Crimea as the only ‘correct’ Islam.  He and the Muftiate are believed to have sought to strengthen their position and / or eliminate religious ‘dissidents’ by helping the FSB persecute them.

There was at least one other Ukrainian turncoat whose role in this case has been especially malignant.  Alexander Kompaneitsev is a former SBU [Ukrainian Security Service] officer who betrayed his oath to Ukraine, and began working in the Russian FSB after annexation.  He was present during the arrest of Aliev, and it was almost certainly due to him that human rights activist Emir-Usein Kuku was arrested on the same charges as Aliev less than a year after an attempted attack and abduction turned into an FSB search, with Kompaneitsev’s appointment,  only after passers-by heard Kuku’s cries and came to his rescue.

It was in connection with the arrests of Kuku and Aliev that Amnesty International first expressed concern over Russia’s so-called ‘Hizb ut-Tahrir cases’ in occupied Crimea.  These are profoundly flawed prosecutions in which men are accused of involvement in Hizb ut-Tahrir, a peaceful pan-Islamist movement which is legal in Ukraine and is not known to have committed any act of terror or violence anywhere in the world.  Russia once declared it ‘terrorist’, almost certainly on political grounds, and now uses that Supreme Court ruling to pass sentences of up to 24 years on men who have committed no crime.

The first arrest of four Crimean Tatars from Sevastopol had received far too little attention.  That changed with the shockingly brutal ‘operation’ on 11 February 2016, when Aliev; Kuku; Inver Bekirov and an ethnic Ukrainian convert to Islam, Vadim Siruk were all taken prisoner.  Almost three months later, on 18 April 2016, two young men, Refat Alimov (the nephew of Bekirov) and Arsen Dzhepparov were also taken prisoner.  It was feared at the time that the FSB was hoping that it would be easier to put pressure on younger prisoners and force them to testify against themselves and the others.  In fact, Dzhepparov was almost certainly taken prisoner because he had rejected Kompaneitsev’s attempts to force him to collaborate with the FSB, while Alimov was probably arrested because his uncle refused to ‘cooperate’.

Russia and its local collaborators have confronted ‘problems’ in occupied Crimea.  Not one of the arrested political prisoners has agreed to give false testimony against his fellow victims of persecution and committed lawyers have made sure that all the falsification, the nonsensical ‘expert assessments’ and fake ‘secret witnesses’ are exposed in court.  So too is the fact that there quite literally is no impugned crime.  It is not clear why Russia’s Supreme Court declared a peaceful organization ‘terrorist’ in 2003, yet that ruling is now being used to pretend that men who have committed no crimes are ‘terrorists’ on the basis of unproven allegations of involvement in a peaceful organization.

According to Aliev’s lawyer, Sergei Legostov, the only ‘evidence’ against Aliev and the five other men was a linguistic-religious ‘expert assessment’  of an illicitly recorded conversation “in the kitchen” where the men were discussing the situation in Russia, Ukraine, the fate of Crimea, the place of Islam in both countries and various religious postulates.  Such assessments are provided by FSB-loyal academics with little or no knowledge of Islam who have been known to claim that a word widely used in Crimean Tatar, though originally from Arabic, ‘proves’ that the men using it are members of Hizb ut-Tahrir.

On the basis of this excerpt, Muslim Aliev was accused of organizing a Hizb ut-Tahrir group (under Article 205.5 § 1 of Russia’s criminal code) as was Inver Bekirov, while Refat Alimov; Arsen Dzhepparov; Emir-Usein Kuku and Vadim Siruk were charged with taking part in such a supposed ‘group’ (under Article 205.5 § 2).  Then in January 2017, the FSB suddenly added another charge of  ‘attempting violent seizure of power in Russia’ (Article 278). The Memorial Human Rights Centre has noted on many occasions that this extra charge is often used against men who refuse to ‘cooperate’ with the FSB.  In Crimea, it is now effectively being applied all the time by the aggressor state which invaded and annexed Ukrainian territory.

On 12 November 2019, three judges from the Southern District Military Court in Rostov (Russia) - Roman Viktorovich Saprunov; Dmitry Viktorovich Merkulov and Roman Vladimirovich Podolsky – ignored the lack of any evidence against the men and provided the sentences demanded of them.  49-year-old Aliev was sentenced to 19 years in a maximum security prison; 55-year-old Bekirov to 18 years; 43-year-old Kuku and Siruk (30) to 12 years;  Alimov (28) to 8 years; and Dzhepparov (29) to 7 years.  The appeal hearings are now underway.