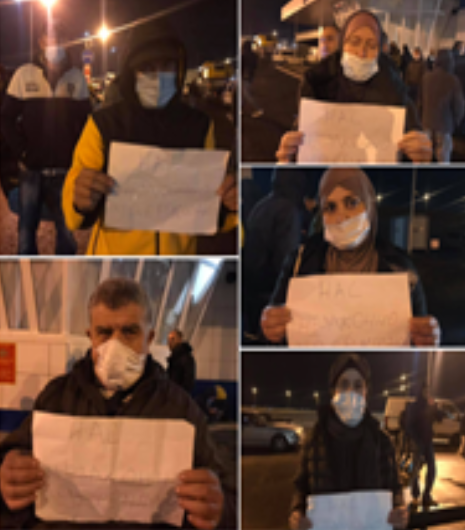 Around 200 Crimean Tatars were stopped by Russian traffic police on Monday evening, and were effectively held against their will through the night near the illegal bridge between Kerch in occupied Crimea and Russia.  The bridge itself has been closed without explanation, reportedly on instructions from Russia’s FSB.

Several mini-vans were carrying Crimean Tatars, a number of them quite elderly, to Rostov-on-Don where the verdicts (read: sentences) are due to be announced on 3 November in the latest trial of three Crimean Tatar political prisoners.  Russian traffic police began stopping them around 9 p.m.  This was clearly an operation against all Crimean Tatars heading to Rostov, however the traffic police came up with sundry pretexts to draw up protocols against some of the drivers, and also – entirely illegally – took all passport details of the passengers.

Lawyer Emil Kurbedinov assumes that the extraordinary traffic police behaviour “was not without FSB involvement.  It is done to stifle any wish to show support and not let people get to the courts.  So that they can do their “dark deeds” quietly, as they’ve done before, so that the ‘conveyor belt’ Southern District Military Court can stamp the insane sentences against Crimean Tatar Muslims.  So that nobody knows about them and information doesn’t get out – that is their purpose”.

Russia began these ‘conveyor belt’ trials of Crimean Tatars back in 2015, with similar methods used in court to intimidate and frighten people who came to show solidarity with the victims.  Since those methods also coincided with mounting repression and arrests of human rights and civic activists, there was no possibility of remaining silent. Since 2016, the civic initiative Crimean Solidarity has actively helped political prisoners and their families, and has also played a vital role in ensuring that information is received within Crimea, mainland Ukraine and abroad about mounting repression.  It is no accident that the Russian FSB have increasingly targeted Crimean Solidarity civic journalists and activists, with a huge number now imprisoned and facing sentences of up to 20 years’ on fabricated charges. They include Rustem Emiruseinov, whose sentence is expected at 10.00 on 3 November.

From around 21.00 on 2 November, the traffic police stopped, searched, photographed and generally intimidated the drivers and passengers of mini-vans carrying Crimean Tatars from all over Crimea.   At 01.50, ‘Russian National Guard’ officers appeared with shields and batons.  One of them openly stated that they had received orders to not let the Crimean Tatars through, and that the bridge would be closed until 8 a.m.

Up to 200 people, around 25 of whom are fairly elderly, are effectively being held near the bridge, in very uncomfortable conditions and without hot food, etc. in late autumnal temperatures.  Most importantly, they have been prevented from reaching their destination and demonstrating their solidarity with internationally recognized political prisoners.

Major flash-mob actions have been taking place throughout Crimea, mainland Ukraine and other places, in support of 41-year-old Rustem Emiruseinov; Arsen Abkhairov (35) and the youngest of Russia’s Ukrainian political prisoners, 22-year-old Eskender Abdulganiev.   They gave their final addresses early on Monday evening, with only 17 of the men’s closest relatives allowed to be present.  The closure of the courts to the public is purportedly because of the pandemic, however it seems likely that the move is also aimed at reducing publicity about Russia’s latest persecution of men for their faith and civic activism.

The men’s ‘trial’ at the Southern District Military Court in Rostov-on-Don (Russia) began in January 2020, with all of the men and their lawyers stating that they had no idea what they were even charged with.  None is accused of having committed, or even planned, any internationally recognized crime, and the main ‘evidence’ against them appears to be an illicitly taped discussion about bringing up children in their faith. The men are charged solely with unproven involvement in Hizb ut-Tahrir.  This peaceful Muslim organization is legal in Ukraine and most countries and is not known to have committed any acts of terrorism anywhere.  The Russian Supreme Court judgement in 2003 declaring Hizb ut-Tahrir ‘terrorist’ was in secret until it was too late for it to be appealed.  Vitaly Ponomaryov, from the renowned Memorial Human Rights Centre, believes that the judgement was politically motivated and passed to make it easier for Russia to extradite people to Uzbekistan where they faced religious persecution and torture.

Since 2015, Russia has been illegally using such ‘terrorism’ charges against Crimean Tatar and other Ukrainian Muslims in occupied Crimea.  In each such ‘trial’, one or more of the defendants are designated the role of ‘organizer’, while the others are accused of taking part in the Hizb ut-Tahrir group allegedly ‘organized’ by the other defendants.  In this case, Emiruseinov is facing the worse charge under Article 205.5 § 1 of Russia’s criminal code (‘organizing’  a group which Russia has claimed is terrorist) with the prosecutor having demanded a horrific 18-year sentence.  Abdulganiev and Abkhairov face the slightly lesser charge of ‘involvement’ (Article 205.5 § 2) with the prosecutor seeking 16 and 15-year sentences, respectively.  All three men have long been recognized by the renowned Memorial Human Rights Centre as political prisoners.

The letters tell them they are not forgotten, and show Moscow that their persecution is being followed. Letters need to be in Russian, and on ‘safe’ subjects.  If that is a problem, use the sample letter below (copying it by hand), perhaps adding a picture or photo. Do add a return address so that the men can answer.