Russia launches dangerous new ‘foreign agent’ offensive against independent NGOsForeign Agents as new ‘enemies of the people’ in Russia and occupied CrimeaRussia moves to extend ‘foreign agent’ law in major offensive against independent journalistsFSB deploys menacing new weapon against journalists and lawyers in Russia and occupied Crimea Russian FSB ‘find’ explosives because they couldn’t force abducted Ukrainian civic journalist to ‘confess’ to treasonRussian invaders install terror methods of censorship in occupied Zaporizhzhia oblast‘Stand up for your convictions, even if you stand alone!’ Anti-war activities in Russia, 3-9 October‘Mogilisation’. Anti-war activities in Russia, 26 September to 1 OctoberHours after Memorial receives Nobel Peace Prize, Russia seizes its property for supposed ‘destructive activities’ From a Zwastika to "No to the War". Anti-war activities in Russia, 9-18 SeptemberSilence abets Russia in torturing and risking the lives of Ukrainian hostages and POWs in occupied DonbasRussia sentences Crimean Tatar Mejlis leader Nariman Dzhelyal to 17 years in revenge for Crimea Platform Conflicting values and conflicting narratives: the case of Russia’s war on Ukraine“He lay on the sidewalk, naming towns and cities in Ukraine”. A digest of anti-war activities in Russia, 23-29 JulyRussian FSB threaten and beat imprisoned Crimean journalist and human rights defender Iryna Danilovych2,500 kms on Foot to Protest against the War. Anti-war Activities in Russia, 17-26 July 2022Russian legislative changes would mean school leavers can officially be sent to fight in Ukraine “We’re not celebrating today” – digest of Russian protests (early June 2022)ECHR rules too late against Russia’s notorious ‘foreign agent’ law and hardly moves over violations in occupied Crimea Crucial judgement for Jehovah’s Witnesses as Russia tries to deny ECHR jurisdiction for its war crimes in Ukraine
• Topics / News from the CIS countries
• Topics / Human Rights Abuses in Russian-occupied Crimea 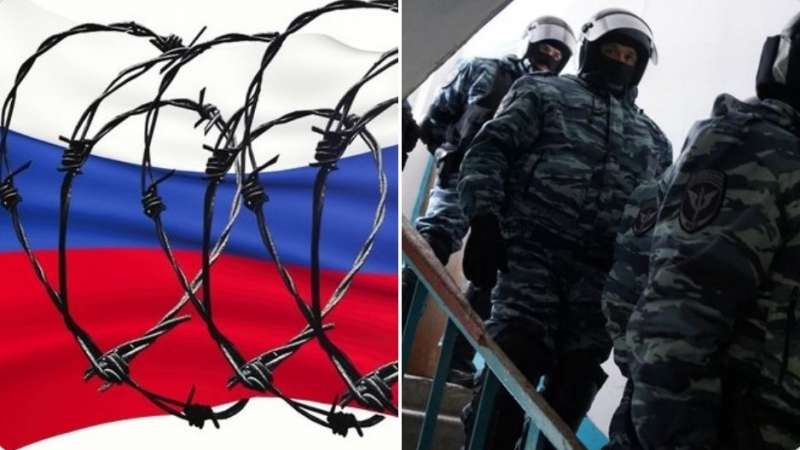 A record four draft bills are currently awaiting ‘consideration’ in Russia’s State Duma with all evidently aimed at crushing the activities of Russian NGOs and further stifling freedom of expression and of peaceful assembly.  The human rights situation in Russian-occupied Crimea is already significantly worse than in Russia, but these bills, if adopted, will prove that it can get significantly worse.

As reported, the bill on so-called ‘foreign agents’, tabled in November, seems almost certain to be adopted.  Draft bill № 1052523-7 on amendments to the Law on Non-Commercial Organizations, would force NGOs labelled ‘foreign agents’ to provide the Justice Ministry with all programs etc in advance, with the ministry able to prohibit them and dangerously extend who the state brands a ‘foreign agent’.  The other three are: № 1057914-7  on something termed ‘additional measures for countering threats to national security; № 1057895-7 on changes to the Law on Education; and № 1057230-7 on amendments to the Law on Meetings, Rallies, etc.

50 Russian NGOs have signed an urgent appeal   to the UN over this offensive against civil society.  In addition, 20 major Russian NGOs, including the Memorial Human Rights Centre, the Moscow Helsinki Group, and others, have addressed an appeal to the Council of Europe’s Commissioner for Human Rights, Dunja Mijatović and to Russia’s Human Rights Ombudsperson, Tatiana Moskalkova.  The latter is known for having denied that there are political prisoners in Russia, only ‘extremists’, and for having justified the persecution of Crimean Tatar lawyer Emil Kurbedinov, so it is, unfortunately, hard to imagine her defending civil society now.

That there is an urgent need for such defence is clear from the proposed amendments that the above laws would bring to Russia and occupied Crimea.

The bill will significantly increase the number of potential ‘foreign agents’, with this already interpreted very broadly.  The aim of the original law, adopted in 2012, was to brand renowned NGOs, like Memorial, and their representatives as ‘foreign agents’ merely because they received grants from abroad.  The law has become considerably more repressive since then, and the new amendments propose ever wider scope to control their activities and, potentially, to close them down.

‘Foreign agents’ will be obliged to provide the Justice Ministry with their programs and “other documents” about planned events.  If these are not prohibited, then the NGO will later have to present reports on their implementation or information that they were not carried out. There is no list of the grounds which the ministry could give for prohibiting such events, yet if the bans are ignored, the ministry will be able to apply to the court for the NGO to be dissolved.  It should be stressed that in modern Russia and in Crimea under Russian occupation, there is effectively no chance that the court would do anything but meekly rubberstamp the dissolution order.

The bill proposes to introduce a new type of so-called ‘foreign agent’ – unregistered civic organizations carrying out political activities and receiving foreign funding.  A separate register is envisaged for such associations which would also be forced to report to the Justice Ministry.

Nor is this all. The bill, if passed, will broaden the category of ‘individual foreign agents’.  Regardless of their citizenship, such individuals will be seen as carrying out political activities  in Russia in the interests of the foreign source (of funding).

The concept of ‘political activities’ is in accordance with an earlier broadening of the scope of the Law on Non-Commercial Organizations.  This means that individuals or organizations that publicly express their opinion about the activities of the authorities; about the situation regarding social; civic or political rights; environmental educational; medical problems, etc., and also gather information regarding Russia’s military and military – technical activities can be considered to be engaged in ‘political activities’.  Such people will be unable to hold posts in the civil or municipal service; will be blocked from access to state secrets; and will have to mark any material they produce with the label ‘foreign agent’.  They will also need to regularly send the authorities reports on their activities and their expenditure.  The media will also be prohibited from publishing any material from NGOs or ‘unregistered civic organizations’ without stating that these are on the register of ‘foreign agents’.

№ 1057230-7 on amendments to the Law on Meetings, etc. will make it even harder than at present to hold demonstrations, marches or pickets.  The bill proposes new draconian demands on the procedure for agreeing such meetings; collecting and spending money intended for holding public events.  № 1057895-7 will enable the government to control and regulate any educational activities.

The Russian regime is clearly seeking to stigmatize, control and, ultimately silence NGOs and all those who wish to enjoy the freedom of expression and assembly that even Russia’s Constitution claims to defend.

The situation is critical in Russia, and it is of particular concern that this is what Russia is imposing on Ukrainian Crimea.  In Freedom House’s annual report for 2019, Crimea under Russian occupation was classified – like Russia - as Not Free, but with a score of 8/100 which was much lower than Russia’s, and not much higher than that for North Korea. (Mainland Ukraine was classified as Partly Free and received 60/100). Freedom House wrote that “the occupation government severely limits political and civil rights, has silenced independent media, and employs antiterrorism and other laws against political dissidents. Many Ukrainians have been deported from or otherwise compelled to leave Crimea. Members of the indigenous Crimean Tatar minority, many of whom vocally oppose the Russian occupation, have faced particularly acute repression by the authorities.”