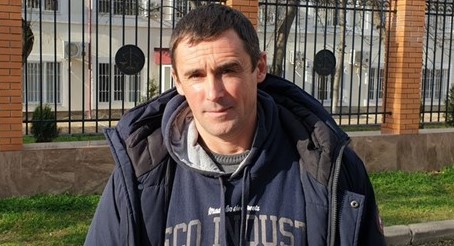 The trial is underway in occupied Crimea of a young Crimean Tatar who found the courage in court to both retract the false testimony he had given against political prisoner Enver Seitosmanov and to file a complaint over the illegal methods applied by Russia’s FSB to extract the testimony.  The FSB decided to charge Ruslan Bekirov with lying in court, and are using a ‘secret witness’, whose testimony cannot be verified, as the alleged proof of this charge.

The cynical lawlessness of this is clear.  The charges brought by the FSB demonstrate the risk that the 35-year-old Bekirov took in retracting testimony given under duress, yet they are backed only by a supposed ‘witness’ whose words cannot be checked.

On 21 January, Bekirov’s lawyer Emil Kurbedinov applied for the identity of the supposed ‘witness’ to be revealed.  He pointed out that the man’s written statement had been obtained by the FSB who had behaved illegally during their detention of his client.  “Neither the court, nor I, nor the prosecutor know whether this person existed, whether he was questioned or whether he signed such a protocol (i.e. the supposed testimony) and what has happened to this person if he existed.”   There is nothing to indicate any threat to the ‘witness’ to justify such secrecy.

The arguments were too compelling for ‘judge’ Igor Goncharov, from the Russian-controlled Nakhimovsky District Court in Sevastopol, to reject out of hand.  He instead ordered that the FSB be asked for information about where the ‘secret witness’ is at present; whether he is under state guard; and whether the FSB have proof that he has faced any kind of threat from the accused.

In March 2019, Bekirov was interrogated by the FSB who wanted him to testify against Enver Seitosmanov, a Crimean Tatar political prisoner who had been arrested in May 2018.  Bekirov was released once he agreed to ‘testify’, however in court on 21 August 2019, he not only refused to confirm the written testimony given earlier, but described how it had been forced out of him, and also lodged a formal complaint.

This trial demonstrates two typical abuses which Russia and its FSB have brought to occupied Crimea.  Firstly, almost all of the politically motivated prosecutions of Crimean Tatars and other Ukrainians in occupied Crimea are based on ‘testimony’ which many of the political prisoners have said that they gave under torture.  We also know from men who were ‘interrogated’ as witnesses that similar methods were applied against them.

There ought to be a proper investigation into such practices with those applying them held to account.  Instead it is a person who retracted the false testimony forced out of him who is facing criminal charges.

The second aberration is the fact that most politically motivated trials of Crimean Tatars and other Ukrainians are based on unverifiable ‘testimony’ of secret witnesses.