Prison staff pumped 61-year Servet Gaziev up with painkillers on 10 June, before sending the gravely ill Crimean Tatar political prisoner to the latest hearing in Russia’s trial of 25 Crimean Tatar civic activists and journalists.  The prosecutor and court needed to be able to tick him as having been present at his trial on ‘terrorism’ charge.  As far as the court is concerned, no more is required, since the verdicts in these trials of Crimean Tatars are essentially predetermined, but this is on condition that the ‘defendants’ do not die before their ‘conviction’ is clinched.

The hearing at the Southern District Military Court lasted only minutes, with Gaziev having a second attack and collapsing on the prisoners’ bench.  It was the fifth time since this cloned ‘trial’ began that an ambulance had to be called.  The paramedic initially simply injected him with still more painkiller, but that did not help.

Svetlana Ablyamitova, Gaziev’s sister and a doctor by profession, has been trying for some time to get proper hospital treatment for her brother.  She warns that this overuse of painkillers is further exacerbating Gaziev’s condition and asks, despairingly, when they will stop torturing her brother.  How can they call him a ‘terrorist’!

Gaziev has long suffered excruciating pain in the stomach area.  The ambulance doctors who examined him during a previous ‘hearing’ concluded that the 61-year-old was suffering  from chronic cholecystitis - an inflammation of the gallbladder, causing abdominal pain, vomiting and possibly fever.

He very clearly needs a proper medical examination and hospital care, but the court is claiming it is not their business, and the SIZO [remand prison] administration will not risk taking any decisions without instructions from above.

For the moment, therefore, the torment continues, and the ‘trial’ is still further delayed.  Nor is Gaziev the only ‘defendant’ whose life is in jeopardy. 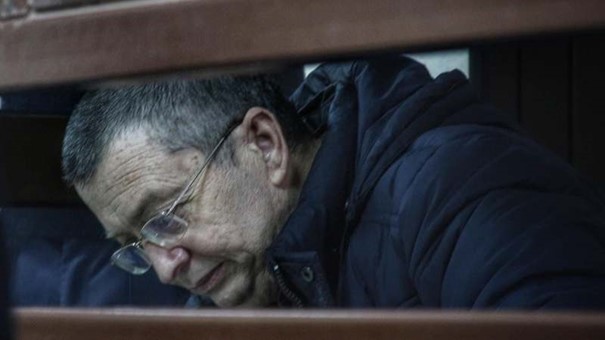 59-year-old Dzhemil Gafarov’s kidney disease is so severe that even Russian legislation should have precluded his detention.  That too, however, requires a decision from above, and instead they are gambling with his life.

Gafarov suffered a serious heart attack in 2017 and was diagnosed that same year with fourth stage chronic kidney disease, which is only a step away from the fifth stage, namely kidney failure.  According to Raziye Gafarova, this means that her husband is experiencing a permanent state of blood poisoning.  By now, the level of filtration of the kidneys is between a quarter and a third of what it would be for a person in good health.  According to Olga Mazurova, a Russian doctor and initiator of a petition calling for Gafarov to be released from custody (which can be signed here), this is typical of a person in pre-dialysis stage.

The conditions in Russian or Russian-controlled Crimean SIZO are hellish even for men who are much younger and in relatively good health.  Over the last two years, his illness has been progressing without any medical supervision and without the kind of diet that a person with his illness requires. This results in acute attacks of gout, or inflammatory arthritis, which arises because his kidneys are unable to get rid of uric acid which instead builds up in his body.  He has spoken of the pain being hellish.

International pressure is needed, since the SIZO authorities, at very most, organize ‘medical examinations’ which invariably end with the doctors claiming that the men’s condition does not preclude detention.  During at least one of the examinations in Gafarov’s case, he was chained to a bed and surrounded by armed men.

This is despite the fact that neither of the two men, nor the other 23 Crimean Tatar civic journalists and activists, are accused of any recognizable crime, let alone one that would warrant such treatment.  All the Crimean Tatars arrested either on 27 March 2019 or, in the cases of Rayim Aivazov and Eskender Suleymanov, soon afterwards, are charged solely with ‘involvement’ or ‘organization’ of a Hizb ut-Tahrir group.  This  is a peaceful, pan-Islamist party which is legal in Ukraine.  In 2003, Russia became the only country in the world (since 2016 joined by the even more repressive Uzbekistan) to call Hizb ut-Tahrir ‘terrorist’.  No adequate reason was ever provided for so labelling an organization which is not known to have carried out acts of terrorism anywhere in the world, yet since 2014 Russia has been using the 2003 Supreme Court ruling as pretext for imprisoning men for up to 24 years without any crime.

Russia is even violating its own laws with its treatment of gravely ill men and there are ways in which politicians and human rights NGOs could help to ensure that it is reminded of this.  Please help by bringing these cases to their attention, as well as by writing to the men.  The more letters they receive, the more Moscow will understand that its torment of men like Servet Gaziev and Dzhemil Gafarov is under scrutiny.